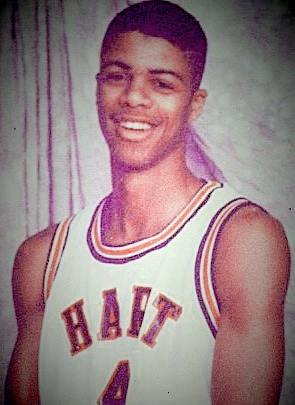 Small town sports run deep in south central Kentucky, but perhaps none run as deep as those right here at home.

But there was one athlete who made his mark in Hart County and beyond. That individual was Noel Rogers, Jr. – better known as Tick.

A basketball standout and 1992 graduate of Hart County High School (HCHS), Tick Rogers earned the title of Mr. Kentucky Basketball and went on to play for the University of Louisville Cardinals.

Among Tick’s earliest basketball memories are those of playing ball at the back of his grandmother’s house, Bertha Rogers.

“My dad put a basketball goal up, and we used to have one-on-one battles back there,” Tick said. “That’s where it all started.”

Tick’s time in little league basketball was guided by the coaching of his dad, Noel Rogers, Sr., as well as Mark Carter. This was when he learned the art of what every athlete dreads: losing.

“What I remember a lot is every time we used to lose, I’d be running up and down the court crying,” Tick said. “You know, my dad would always ask me, ‘Did you do the best you could do?’ I’d say, ‘Yeah, but we lost.’ He’d tell me, ‘Look, you can’t do anymore. You’ve done all you can do.’”

As he moved on to middle school basketball, playing for Munfordville Elementary and county-wide teams, Tick could often be found shooting hoops at the fairgrounds.

“…From the time I was four or five-years-old to 12 or 13, it was just street ball,” Tick said. “We didn’t have a gym where they open the gym for us to come in and play. We would always meet, set a time to meet and play ball.”

“You know, we had Ann Waggoner who used to kill us (on the court),” Tick added. “I remember, man, playing over there one day, and Ann, she’s like, ‘Hey, you can be good if you keep working.’ So, watching her play, you know she was a star at Hart County, watching her play gave me confidence and her telling me I can be good gave me a lot of confidence…”

Not only was it confidence that drove Tick to be his best, but also dedication and sacrifice.

“He (Tick) would go to the courts and work on one move, sometimes for an hour, just one move,” Cornelius said. “You know, when you see kids today who get out here and want to do…the pretty stuff, and I always think about when I used to see Tick do certain things. That’s when you (Tick) figured out that go-to move or something that makes you successful.”

“It was basically because I wanted to be the best basketball player I could be,” Tick said of his work ethic. “I (went) to U of L basketball camp I think my seventh or eighth grade year and got MVP of the camp, and from that point on, man, it was like work, work, work, work.”

Tick’s HCHS career began in 1988 as he played on both the freshman and junior varsity teams. However, half way through that season, Coach Ricky Line moved the young basketball player up to the varsity level. Tick remained playing on the varsity team for the remainder of his high school career. 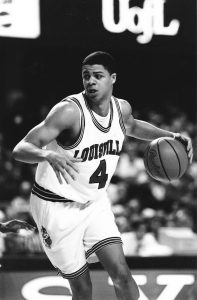 Hart County’s Tick Rogers played for the University of Louisville from 1992-1996. Twitter photo.

During his senior year in 1992, Tick won Mr. Kentucky Basketball and signed to play on the collegiate level with the University of Louisville.

But despite achieving his goal, Tick’s first year at Louisville wasn’t exactly what he expected.

“My first year at Louisville, I think I was playing maybe six minutes a game,” Tick said. “I had other coaches (from other colleges)…come up to me after games and say, ‘Hey, man, if you want to leave (Louisville), you know you’re always welcome. You can come here, and you’ll play right away.’”

Feeling frustrated due to lack of playing time, Tick said his ego caused him to consider transferring to another college.

“I was going to leave, so I called my dad and said, ‘Man, I’m gone. I’m leaving,’” Tick said. “…He said, ‘Son, let me ask you something. Have you been doing everything that you need to do to play? Have you went and talked to Coach Crum about why you’re not playing?’”

With his father’s words in mind, Tick met with his coach, Denny Crum.

“My dad said, ‘I didn’t raise no quitters. If you want to leave because that’s the best choice, I’m not telling you not to do it, But anything you want, you’re gonna have to work for it,’” Tick added.

From that point on, Tick said that every night at 10 o’clock, he could be found in the gym doing defensive slides and wall sits.

That’s when his mindset changed, and he soon found himself becoming a key player for the Cardinals. Tick won Defensive Player of the Year twice, once in the Metro Conference and once in Conference USA.

“One thing that I didn’t do is, I never looked at the stats,” Tick said. “I played ball, and I tried to have as much fun as possible…I was more worried about everybody else being happy. I think being unselfish might have hurt me a bit (in scoring), but that’s the only way I know how to play ball.”

After college, Tick attended training camp with the Bulls, but it was suggested that he try the Continental Basketball Association (CBA).

“Me, I’m looking at money now (at that point),” Tick said. “I thought go overseas and get money and come back, but they never called me. I wish I would’ve went to CBA first, but hindsight is something.”

Tick played basketball in Europe for a total of 13 years.

Tick now works for ADT Security Services. Although his own basketball career has ended, he certainly hasn’t forgotten all of the memories, including the coaches that impacted his life.

“Coach Line and Coach Crum had a lot in common as far as treating people the right way and being nice to everybody, polite,” Tick said. “…I was sitting around the house, and I had a picture with Coach Line. It was at our senior banquet at U of L…I really believe that Coach Line is one of the top three coaches that ever coached me, and that includes me playing professionally overseas.”

“One of the things that’s always been important to me is being an example to my brothers,” Tick said. “I’m not saying I’m perfect by any means, but I try to be a good example for them.”

Although being named Mr. Kentucky Basketball was a highlight in his career, home has always been a place in which Tick has found the most pride.

“Today when I came back home, I went to every place that I lived in Hart County,” Tick continued. “Building 3, building 11. I went to my mom’s house down by the depot, rode by grandmother’s house, the graveyard, paid respect to my mom, and little brother, and grandma. It feels good to come home sometimes and do that stuff.” 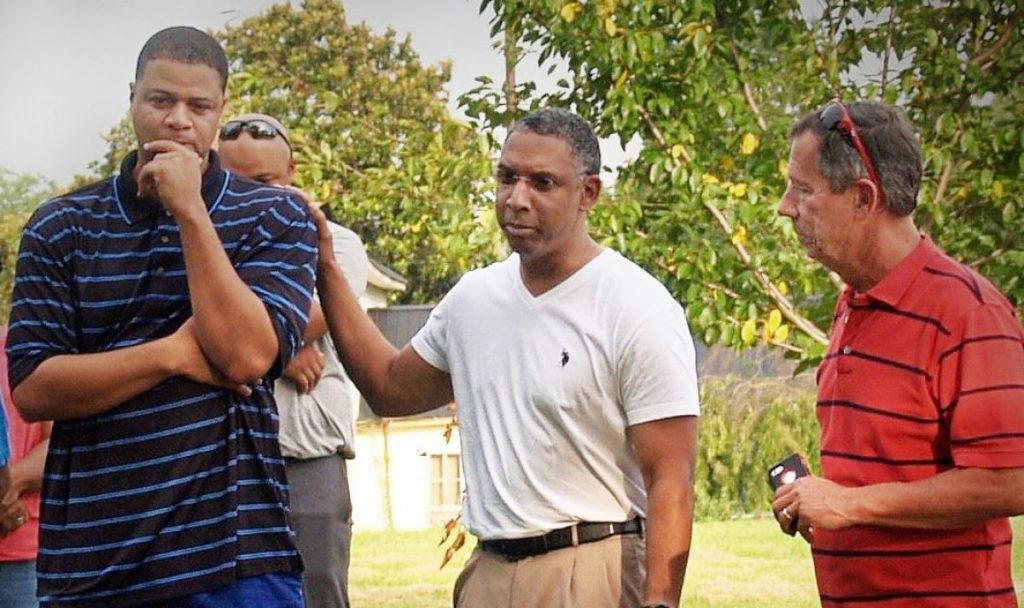 In 2015, Tick Rogers. Left, was honored with his own historical marker at Munfordville Elementary School. With Rogers at that time were Cornelius Faulkner, center, and Ricky Line. Jobe Publishing File Photo.

And as much as his local fans still love him, Tick loves Hart County just the same.

“I definitely appreciate it (the support),” Tick said. “I love coming home…I’m still the same Tick who grew up here.”

A link to the full program video with Tick Rogers, Cornelius Faulkner, and Todd Johnston can be found on the Hart County Historical Museum Facebook page. It can also be viewed on TheCubRunKid Youtube channel. 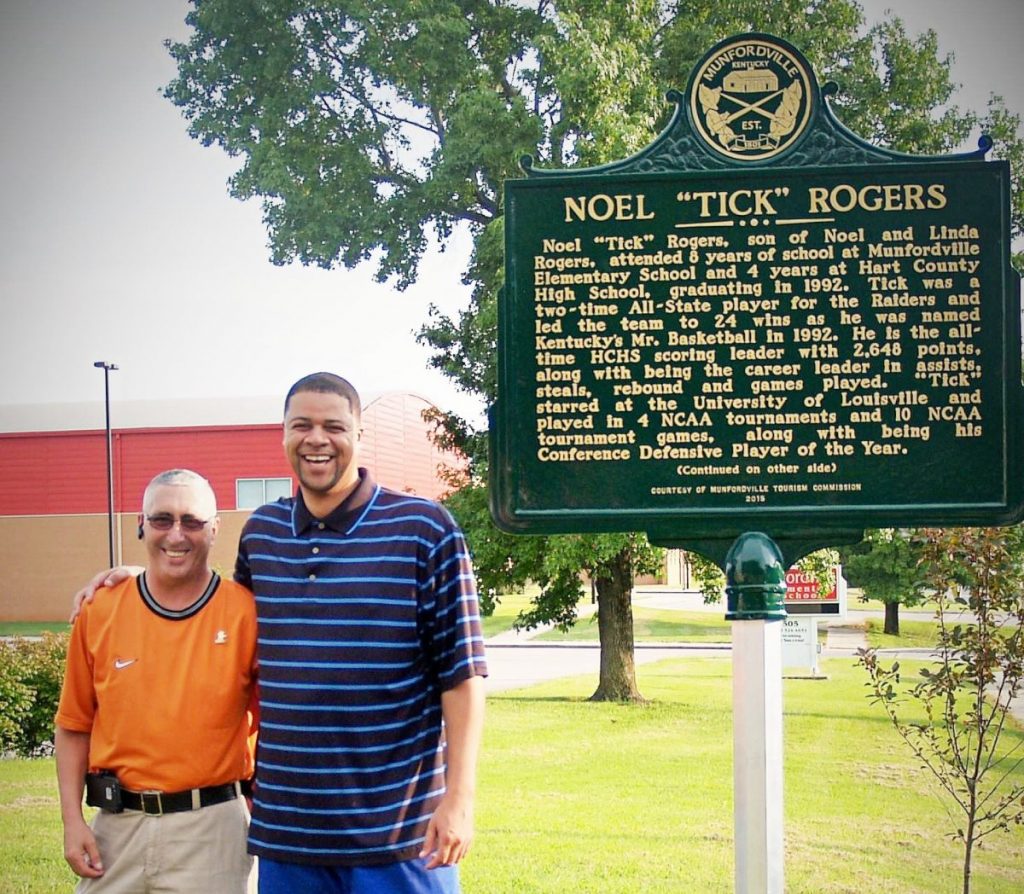 In 2015, former HCHS basketball standout Tick Rogers was honored with his own historical marker at Munfordville Elementary School. With Tick at that time was his former trainer, Bucky Day. Jobe Publishing File Photo.