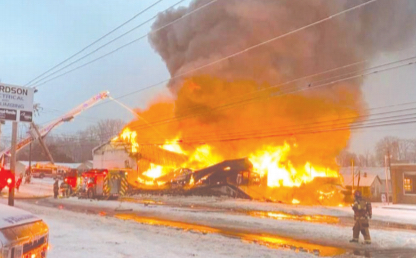 Late Monday afternoon at 4:26 p.m. the Glasgow Fire Department responded to the scene at Hughes HVAC located at 826 West Main Street in Glasgow.

“Thick, black smoke was coming from all areas of the building, we had to fight the fire from the exterior,” said Chief Rogers, GFD.

After battling the fire until the wee hours, two of the department’s firefighters were treated for insignificant injuries sustained on duty.

The building was declared a total loss.

As of 9 a.m. Tuesday morning, Roger said that there was still a unit on the scene battling hotspots.

At this time, they have yet to determine the cause of the fire.

“This building was so big, the fire was so big, we have actually reached out to the state fire marshal. They are going to come down tomorrow and assist us in determining the cause of the fire,” said Rogers.