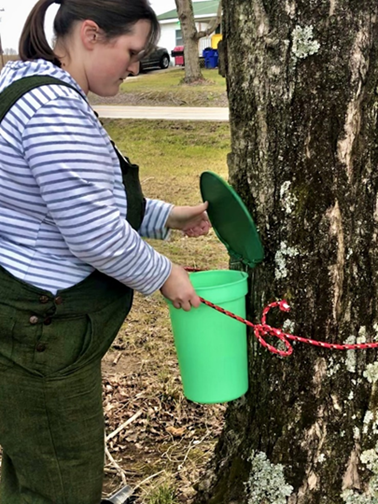 On last Saturday’s cool evening, Michigan native Megan Ernspiker who now lives just north of Brownsville was seen tapping her three sugar maples in her front yard. “While any maple tree will produce sap, Sugar Maple is the best, but you should tap it before it buds.” Ernspiker said during an interview. Her trees are producing around six gallons of sap a day altogether, she also stated that it normally takes around 40 gallons of sap just to produce one gallon of maple syrup.

Megan has been boiling her sap down to make syrup, although when asked if she would be selling it Megan stated that she was only making syrup as a hobby. She only has about half of the sap she needs to make a complete gallon. Megan reflected on her childhood stating that she could remember when her parents tapped their maples as a child back in Michigan.