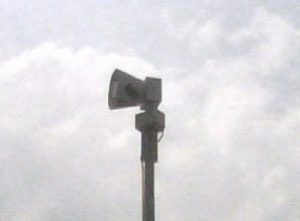 In the February 9 regularly scheduled open meeting of the Metcalfe County fiscal Court, the first matter of business was the Summer Shade siren.

“The siren went down almost a year ago. Last summer we got the computer, but we held off on the software for financial reasons,” said Emory Kidd, Director of Metcalfe County Emergency Management.

“I’d like to go ahead now and get the software installed because severe weather season is right around the corner.”

Kidd also stated that although they had silently tested the sirens in the past, because he wants the community to know that they are up and running he plans to test them aloud four times a year.

There are four sirens within the county, and three more within the City of Edmonton.

The court approved for the payment of the new software, which is an upgrade of the 2004 software purchased, for the price of $1,500. Ronnie Miller made the motion, and it was seconded by Donnie Smith.

“I expect that the software will be good and compatible for our use for the next 5 to 10 years,” Kidd said.

Next up on the agenda were the Orders of Affiliation for the CERT Team and Rescue Squads, which were approved unanimously. A motion was made by Kenny Scott and seconded by Ronnie Miller.

The January financial report, budge, and interfund transfers were all approved along with the claims. It was mentioned that the third round of CARES Act money was being given to the county and that an additional fourth round could come in the future.

In other business, the issue of the previously discussed illegal dump ordinance arose. Judge/Executive Stilts stated that at the next fiscal court meeting, they would likely have an ordinance ready for the magistrates to approve.

The fence around the Summer Shade tower was also brought up, and Emory Kidd said that he would acquire probable quotes for the installation of the fence prior to the next fiscal court meeting if at all possible.