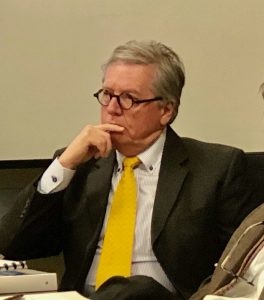 Effective as of March 1, William “Billy” Ray will step down as chief executive officer of the GEPB. Jobe Publishing Archive Photo.

The Glasgow Electric Plant Board (GEPB) met in special session via Zoom on Thursday, February 11 to discuss mediation efforts.

Once mediation concluded, mediator Rick Walter announced during executive session that effective as of March 1, William “Billy” Ray would step down as chief executive officer of the GEPB.

Mediator Walters recited the following terms that were agreed upon during mediation:

Two other agreements from the mediation were also agreed upon:

Davenport clarified that the GEPB itself is likewise a party to the mutual non-disparagement mutual release that Baker is to prepare.

“Secondarily, with the parties will be agreeing to an agreed order which will allow Mr Ray’s intervention in the pending circuit case for the purposes of the settlement agreement and getting these things down,” Davenport stated.

“DT (Froedge), we will need a motion to approve those terms as recited by Mr. Walters and as clarified by Mr Davenport,” Hampton added.

A motion was made by Witcher and seconded by Pritchard to accept the mediation terms. In an unanimous decision, the Board approved to accept those terms.

Another meeting is scheduled for February 12 at 9 a.m. for the GEPB to request that the law firm of Frost, Brown, & Todd withdraw a lawsuit that would attempt to remove the board from a 20-year agreement that has been made with the Tennessee Valley Authority (TVA).