Shared that current development could be lost and future opportunities threatened

The Glasgow City Council met by video teleconference on Tuesday, February 8 to discuss issues of the Electric Plant Board’s current state of affairs.

Among the EPB issues is the signing of a 20-year contract with TVA by one member of the board without the knowledge of the other board members. As a result, a lawsuit was to be filed against TVA to make null and void that contract.

In a letter from DT Froedge Chairman of the Glasgow Electric Plant Board it states, “That is simply untrue, GEPB is not seeking to terminate its relationship with TVA, nor is it seeking to renege on any promises it made to TVA. Instead, GEPB is simply seeking to restore for itself an Important right that it bargained for with TVA in the Long Term Contract (LTC)…Unfortunately the GEPB board member, who was in the minority favoring retaining the 20-year term, unlawfully signed a TVA document in June 2020, waiving that option without the knowledge or authority of the Board…The lawsuit challenges the validity of this waiver.”

The City Council also received a letter from the Barren County Economic Authority (BCEA) and the Glasgow-Barren County Chamber of Commerce (GBCCC) which represent over 350 chamber member businesses. In the letter it states, “We oppose the actions taken by the Glasgow Electric Plant Board to rescind and cancel the Long Term Contract with the Tennessee Valley Authority. If cancelled it will negatively impact economic development and local industry.”

The letter went on to state that by cancelling the contract with TVA, Glasgow will lose the top-ranked utility in the US. The letter also called on the City Council member to intervene with the Glasgow Electric Plant Board, Board of Directors, and the Glasgow EPB Board of Directors to resolve the issues in a manner that will result in stability and sound judgment when it comes to the electric power supply for the businesses that support the local economy now and for generations to come.

Mayor Harold Armstrong, after speaking with Maureen Carpenter, Director BCEA, stated that Carpenter had been guaranteed that TVA will work with us to the furthest extent of their ability, and they will start today with the understanding that what’s been guaranteed is happening.

In response to the letter, the Glasgow City Council proposed and unanimously approved a resolution expressing the council’s stance on the Glasgow Electric Plant Board’s current state of affairs.

The next City Council meeting is scheduled for Monday, February 22nd at 7 p.m. 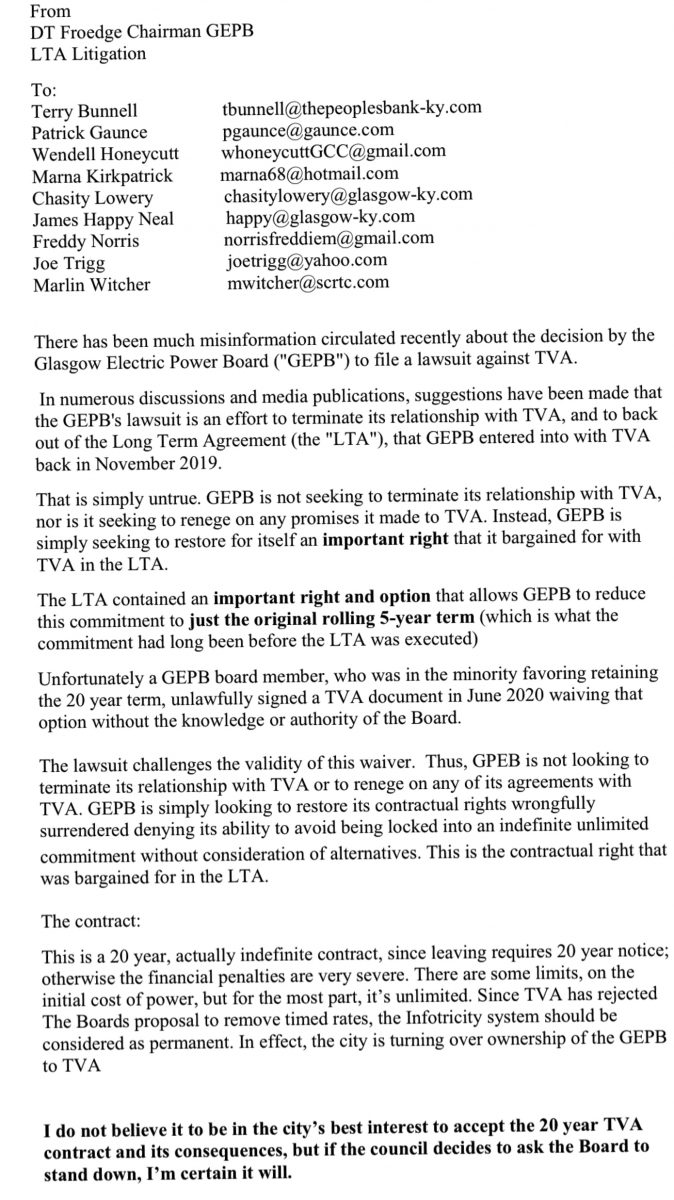