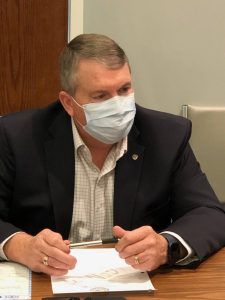 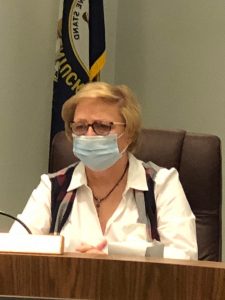 Councilmember Cathy Nunn spoke up about the procedures required to bid and purchase items. Photo by PJ Martin/Jobe Publishing, Inc.

In a special called meeting of the Edmonton City Council held in-person on February 3, the council was asked if they would like to announce a bid for half interest of the new pumper truck purchased by the Metcalfe County Volunteer Fire Department.

Horace Robinson Chairman of the Board for the Metcalfe County Fire Department was present to present the purchase information of the 1999 Pumper Tank Truck to the council. The subject was presented at the February 1 meeting and referred over to the February 3 meeting.

When Mayor Doug Smith opened the meeting for discussion, Councilmember Cathy Nunn spoke up, “I was the one who suggested to wait till we could meet face to face because I think this is not the first time we’ve been asked to help with a situation that we didn’t know anything about beforehand. I think our problem with the fire department is communication.”

“It seems like every time something comes up, you’ve already done what needs to be done but you come to us to either help you fix it or want money to pay for it. You know, and it’s not the thing that we don’t want to help, or we don’t want the fire department to be successful, we’d just like to know about things before they happen… So if we knew about this ahead of time, then there’s a possibility we could have had a grant for this truck…if you’re gonna want to use our money, then we need to know about it before you go out and spend it and then come to us to take care of it… If we’re voting on this, I’m voting no.”

Chairman Robinson responded, “The last time I was personally up here, it was for the rapid response vehicle and it was brought before the council before it was ever bought…so I know that one was done above board.”

Robinson emphasized that he is county and is on the board of directors of the county, “I have no oversight or anything over the city fire department.”

“The reason we didn’t try on a grant…it’s nearly impossible to get a grant for a used piece of equipment…This here (pointing to the paperwork) was brought up because the tanker truck we have down there now, we almost considered it an emergency, has had framework done on it and its pretty much not safe. That’s one reason we’ve not offered to let Summer Shade take it until they get one is because we don’t want them to have anything that’s not safe down there.”

Councilmember Wayne Wilson asked, “Why wasn’t this brought before the city council before y’all brought it?”

Metcalfe Fire Chief Jerry Clemmons answered. “We got a telephone call that said they had it, and another fire department wanted it but they knew we wanted it so they called us first.”

Robinson added, “We didn’t feel safe in the old one anymore and when we found this used one come in that met the qualifications of what we needed, we either had to act or let it go and then maybe have to spend 300 or 400 thousand dollars to get a new one. That’s the only reason that this was done this way.”

The vote results were 4 no’s cast by Austin Bragg, Cathy Nunn, Wayne Wilson, and Faye Word, 1 yes cast by Teresa Hamlett, and 1 abstained since Curt Estes is on the fire department board also.