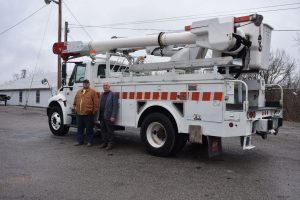 Thanks to the efforts of Metcalfe County fiscal court, extensive tree trimming will be underway, helping the roadways to stay clear of fallen limbs and debris.

The 2004 International 4230 Altec AMSO bucket truck with a 60 ft. boom was previously used by a lineman company in Indiana.

Bunch and Magistrate Kenny Scott inspected the truck in person last week before deciding to make the recommendation.

“It doesn’t have any leaks, there are good tires, it’s a good trade truck, and we couldn’t find anything wrong with it,” said Bunch. Scott agreed that is was a solid purchase for the county.

Bunch also discussed the fact that there is limitless work to be done once they get the truck. “We can’t go wrong we could use it every day,” he said, referring to trees along roadways that need to be trimmed, and trees that need to be cut down, but cannot safely be downed without such a truck.