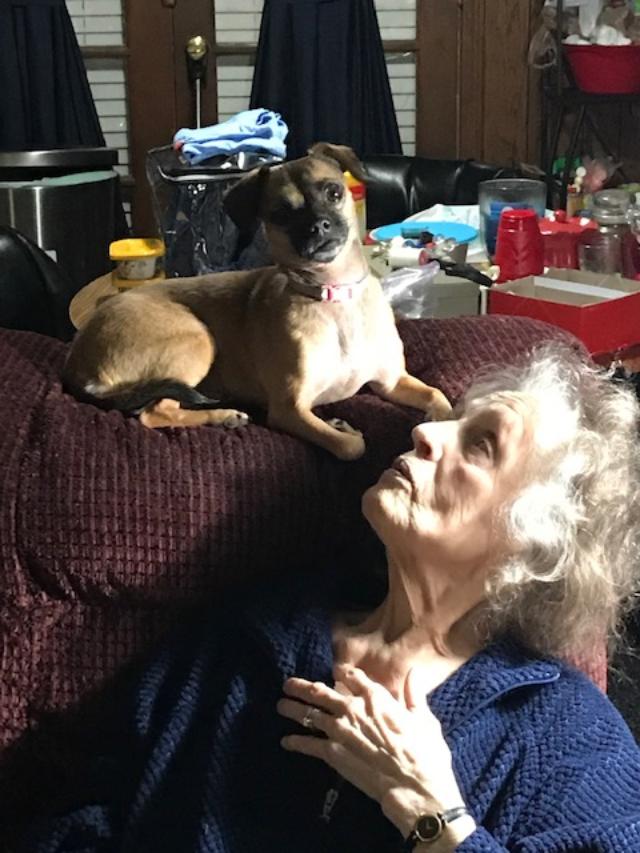 Through ARK’s foster/pet adoption program, animals like Bailey are able to be adopted by loving families. Photo submitted.

Just over five years ago, there was no local organization for stray animals, let alone an actual holding facility in Hart County.

At one time, the Edmonson County animal shelter had been under contract to accept all of Hart County’s dogs. However, when it was closed down by the state due to inhumane conditions, Hart County had no place to send its stray animals.

That’s when a group, led by June King, organized a series of community-wide meetings during October through December of 2015. Because of the relentless efforts of June and other like-minded individuals, Animal Rescue Kare, LLC (ARK) was established.

Even though all efforts have been aimed at reducing the number of stray animals within the county, ARK’s ultimate goal has always been an in-county animal facility.

“The first week after Joe Choate took office as the new Hart County Judge/Executive, ARK invited him to sit down at an ARK Board Meeting in January 2019 to review the need for an animal shelter in-county,” said Ron Gonterman, Chairman of ARK’s Shelter Committee. “The Judge asked many good questions and stated that he would keep an open mind as he learned more about the options that might work for Hart County.”

In March 2020, it was announced during an ARK Annual Members Meeting that the Hart County Fiscal Court had unanimously agreed to support a Hart County animal canine holding facility.

“The court had secured a location for a Hart County holding facility/future shelter by entering into a five-year lease agreement with the Hart County Fairgrounds Board to convert the old Dr. McFarlin building into a Hart County shelter,” Ron explained.

According to Ron, the facility at the fairgrounds is still undergoing renovations.

“The office plan includes a reception counter to greet the public, a dog adoption room, storage room, dog washroom, bathroom, and temporary holding quarantine caged area suitable for any incoming dog that needs to temporarily be kept separate from the other canines,” Ron stated. “The outdoor kennel area will have eight indoor/outdoor kennels, which can potentially house up to 16 dogs. Once the operation begins, the kennel area must be washed down daily with a disinfectant. So, all materials are being chosen to accommodate this.”

When the building renovation is completed and the county is ready to begin operations, Ron explained that ARK expects to continue to assist with volunteer recruitment to help out with daily operations at the facility, continued fundraising for special project needs, ongoing assistance with the county foster and adoption program, and continued networking with other county shelters to solicit expertise for improving the ongoing operations.

“ARK has made a long-term commitment to assist the county in any way that it can,” Ron said.

However, with the facility not complete as of yet, ARK is still continuing its original efforts in helping the community with stray animals and has continued to do so even during a pandemic.

A spay-neuter-rabies voucher program was the first critical program introduced by ARK in 2017 in hopes that it would encourage local citizens to help reduce the population of unwanted and stray animals.

ARK’s four-year old voucher program to spay/neuter dogs and cats is continuing to have a significant positive effect in the county. ARK has sold approximately 1,359 vouchers since the program began, plus several hundred BRAWA cat vouchers for a nearly 2,000 total in all.

“These ARK voucher programs have made a tremendous difference in reducing the animal population pressure that the new shelter will have from overcrowding,” Ron said.

June King is the Spay-Neuter-Rabies Voucher Committee Chair and stated that the voucher program is a true game changer for the community.

“We focus on spay/neuter to continue to bring the numbers down of unwanted litters,” June said. “I think once the building opens, it will really open the doors for us.”

The Hart County Fiscal Court currently has a contract with the Bowling Green/Warren County Humane Society (BGWCHS) organization. This is where all of the dogs that are picked up by Hart County Animal Control Officer Jimmy Martin are taken, as well as dogs surrendered in person by any Hart County resident.

When looking at numbers, however, it is evident that the spay-neuter-rabies vouchers are working to help control the population of stray or unwanted dogs.

ARK’s last spay-neuter-rabies voucher event was held in December of last year, with the next one tentatively scheduled for February. Nevertheless, there is a special offer available now for cat spay-neuter vouchers via the team effort of ARK and the Barren River Animal Welfare Association (BRAWA).

According to June, there is no limit to the number of vouchers that an individual can purchase, thus providing a great opportunity for homes with multiple cats. This offer is for Hart County residents only and the procedures must be done at BRAWA in Glasgow.

“BRAWA helps us control the unwanted population of cats,” June said. “They are letting us have vouchers for $25. The Hart county Sheriff’s Office is selling those for us, or anyone can buy those on our ARK website.”

In 2018, the second program that began for ARK was the foster/adoption program.

Bonnie Moore is the ARK Canine Coordinator. She stated that in 2020, ARK accepted 61 canines and adopted out 59.

“COVID did not stop this team,” Bonnie said. “We met potential new owners at parks and maintained distances with masks. The biggest thing I heard from these adopters is that we actually responded to their inquiries and applications. They said other agencies were either not responding, saying adoptions were on hold, or they weren’t adopting out of state.”

Although ARK has limits on how far can be traveled to meet a potential new pet owner, Bonnie said that they have met half way and adopted out as far as Wisconsin and South Carolina.

“We are a small but mighty team of four active foster homes and three part-time foster homes,” Bonnie explained. “We can always use more foster homes if anyone is interested…It’s a very heartwarming experience, fostering and finding the right fit in a new home for these canines. I still get a text from our first dog adopted three years ago with updates of how the year went.”

In 2019, a third program that followed was the trap-neuter return program (TNR) for area unowned stray cats.

“We humanely captured 375 stray or feral cats and got them to area veterinary providers to be spayed and neutered,” Laura said. “We visited all corners of Hart County to help cats and the people who feed them. Occasionally, we can find new homes for the tame and healthy cats, but the large majority are happily returned to their outdoor areas. TNR helps control overpopulation of our county’s cats and prevents suffering of homeless kittens.”

During 2020, ARK’s TNR program received a generous grant from Two Mauds and also many private donations.

“This project (TNR) has made a tremendous splash in our community since so many people know of stray or unowned cats but need assistance with trapping and transporting them,” Laura said. “We are already off to the races in 2021 by getting 22 cats fixed in the first two weeks of January…We salute BRAWA in Glasgow, Hartland Animal Hospital in Horse Cave, and Riverside Animal Clinic in Munfordville for their partnership with us.”

It is through the support from the community that ARK has grown its programs – the spay-neuter-rabies voucher program, the foster/adoption program, and the TNR program – into the success that they are today.

“All (programs) are aimed at reducing the number of animals that will end up in the Hart County animal shelter,” Ron said. “Without such animal population control efforts, any new shelter building will quickly be filled to capacity and over-run…We’re all in this together to help improve the quality of life in Hart County through a well-run local animal shelter”

Due to the pandemic, ARK’s last in-person event was the organization’s annual members’ meeting held in March of 2020. According to ARK Treasure Janet Kistler, this year’s membership meeting will be quite different.

“Instead of the usual get-together, ARK will host a Facebook live event featuring reports about our work, charming animal stories, elections for the board of directors, and a virtual tour of the new shelter,” Janet said. “The event will take place on March 16, 2021 at 6 p.m. Watch for more details about this virtual experience.”

To learn more about ARK, visit the organization’s website at ark4hart.org. The website is also available as a way to report stray cats, make a donation, purchase a membership, and access applications for the pet foster and adoption program. 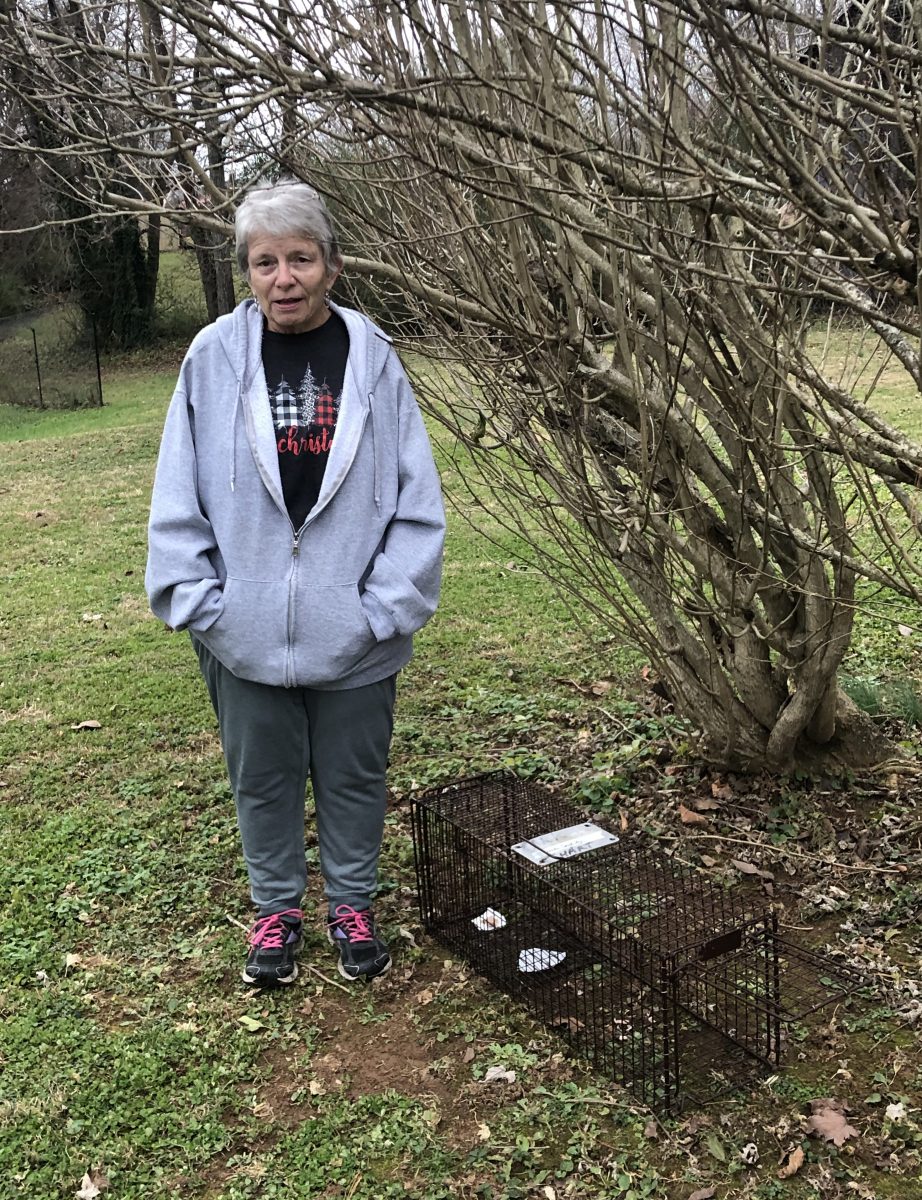 Wanda Sandidge is pictured with a humane trap that is baited and ready to capture one of the many feral cats in her Horse Cave neighborhood. This is part of ARK’s TNR program. Photo submitted