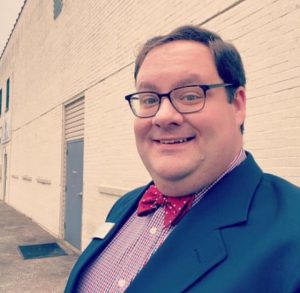 Kyle Hadley, Director of the Barn Lot Theater, smiles proudly in front of the former TOPPS building, which BLT recently purchased. It will one day house a state-of-the-art theater space for bigger, more elaborate productions.

Last week, the Barn Lot Theater announced that it has purchased the downtown, corner building that housed TOPPS for decades.

Hadley said that although the theater is in the very early stages of the process, they have big plans.

“We envision turning the building into a sizable community arts center. Soon we will begin the search for an architect firm and begin the long process of making this dream a reality,” he said.

“First of all, we plan on consolidating many of our operations under one roof. Administration, warehouse, costumes, and construction/scenic would all be moved and expanded in the new space.”

Currently, the BLT warehouse is a block away from the theater, and many of the other entities are on site but in different buildings.

“This is a big inconvenience. In the coming months, we will temporarily be moving our administrative offices back into our current theater.

As for the former TOPPS building, there are big plans to breathe new life into downtown Edmonton.

“We plan on putting in an additional traditional sized state of the art theater in the space, and keep our old theater as well,” Hadley said.

The new theater space is destined to have a large stage that would allow BLT to do bigger shows with multilevel sets.

“Of course, the larger theater would allow more patrons to see shows. We hope to have a large lobby and multiple rehearsal spaces/classrooms. The increase would allow us to provide more shows and smaller events throughout the year,” Hadley added.

If all goes to plan this would also allow for the theater to offer a rental/gathering space for the community.

“This could also allow for an expanded education program and space for local artists to come in and provide training on-site. We will one day have a full season with multiple events going on monthly that involve all ages in the community.”

Realistically speaking, Hadley knows that these things will take time to accomplish, but in the end, result will be monumental for the community and the continuing history of a beloved community theater.

Hadley and the Barn Lot Theater staff are not only happy about what this means for community theater’s spot in the limelight but also what it can do to help revitalize Edmonton’s economy and downtown activity.

“The attendance alone could revitalize downtown Edmonton. Statistics show attendees spend on average $36 per person outside of the theater when they come to see the show. This could result in millions of dollars being added to the economy over time,” said Hadley.

As for coming seasons, with COVID-19 restrictions still in place for use of the current theater will be limited in 2021. That does not; however, meaning BLT won’t be doing shows. They hope to do a few shows offsite, in an outdoor setting.

To read more about the theater’s plans and expansion efforts, read the Edmonton Herald-News.