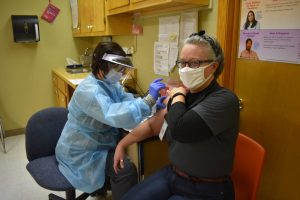 Last Tuesday, as the close of 2020 quickly approached, approximately 40 first responders who work in Metcalfe County received the Maderna COVID-19 vaccine thanks to the Barren River District Health Department.

The shots were administered at the Metcalfe County Health Department.

“This included EMS, police officers, and firefighters,” said Janarae Conway, BRDHD. These were the first vaccines administered in the county.

It is anticipated that in the near future a second round of vaccinations will come to the county, for non-hospital healthcare workers.

Thus far, those who have received a vaccine in Metcalfe County have reported very few side effects, including soreness at around the entry point, mild aches and pains, and malaise. No significant side effects of any kind were reported.

The vaccine itself is free, and the related administrative charges were paid for via insurance for the insured.

“For those who don’t have insurance, there is federal grant money that can be access to HR essay to offset the cost of any related fees, and “Conway added.

As for the general population seeking the vaccine, it is expected that it will be at least early summer before that comes to pass.

“At that point, we expect that every pharmacy, clinic, and doctor’s office will have it available,” said Conway.

At this juncture, two companies have a vaccine: Maderna and Pfizer. However, Metcalfe County is only able to provide Madrrna’s vaccine, because the Pfizer vaccine must be kept in cold storage.