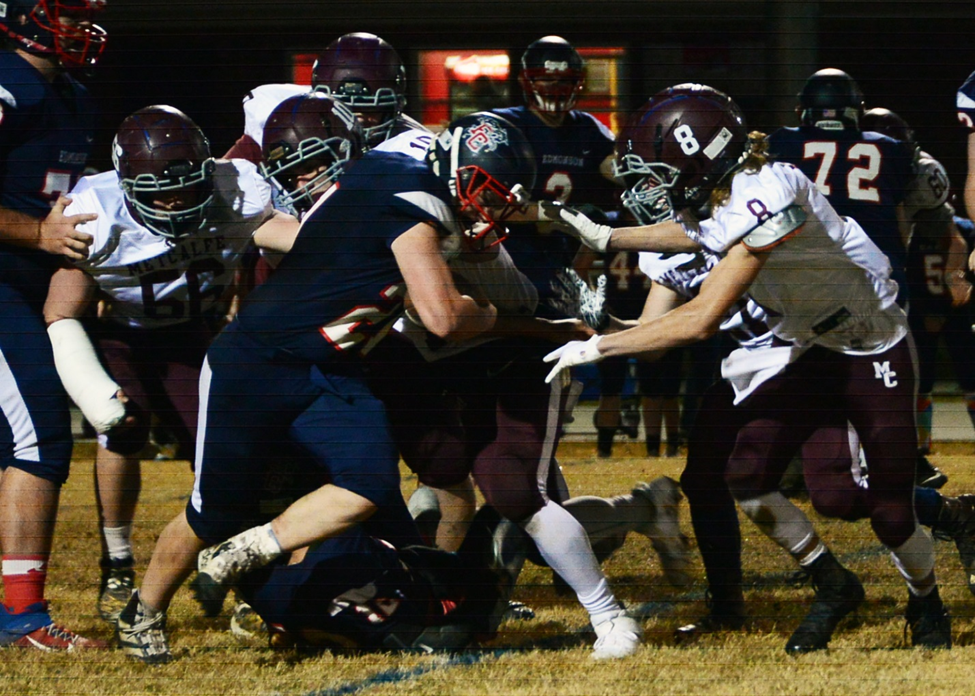 How sweet it is.

The Metcalfe County Hornets exacted a sweet measure of revenge against the Edmonson County Wildcats last Friday night. The Hornets tamed the Wildcats 34-27 to claim the 2A District 3 Championship and advance to the quarter finals of the KHSAA State Playoffs with the victory.

ECHS defeated MCHS 23-21 earlier in the season in district play.

In the last five years when the two teams tangled, the game has been decided by a touchdown or less so why would a game of this magnitude be any different.

The Hornets had the edge and seemed to be wearing down the Wildcats at several different times in the game but, give the Edmonson County squad credit, they fought hard and found a way through big plays to keep it close to the very end. Wildcat quarterback, Jon Smith, connected with Clay Walden, on two long passes (42 and 57 yards) when Edmonson had needed a miracle play.

These two Wildcat seniors, Smith and Walden, had outstanding efforts in the loss. ECHS won the district title last season and will see a total of 12 seniors graduate this year that Coach Nathan Smith, the football program, and the school will miss.

The Wildcats had to regroup on offense after Matt Shaw was injured and lost for the season. Edmonson also dealt with COVID 19 and did not play their last three games on the schedule before returning to the gridiron and defeating Clinton County 26-12 in the first round of the playoffs.

With Metcalfe clinging to a 7-point lead, Hornet quarterback, Peyton Dial, completed a pass to senior receiver, Sawyer Edmunds, in the final few minutes to keep the football in Metcalfe’s possession and keep the clock running. Edmunds slipped and nearly came up short on the 3rd and nine pass completion, but he had no intention of coming up short. Edmunds stretched out his long body and, when the first down signal was given without a measurement, the Hornets knew the score and clock were on their side.

Dial ran for another first down and Metcalfe captured the title and advanced to play Lexington Christian this Friday night December 4, at 7:00 PM in the Class 2A 2020 KHSAA Commonwealth Gridiron Bowl. The Eagles defeated Somerset 42-35 to claim the 2A District 4 title. The Eagles have eight wins and only one loss this season. The lone loss (40-6) was to 5A Fredrick Douglas.

The Hornets and Wildcats both started the game slowly, but it did not take long for their offenses to warm up. Wyatt Blythe danced into the end zone from 20 yards out for the first score of the game and a 6-0 MCHS lead.

The Wildcats answered on their next possession. Smith hit Walden on the senior connection for a 42-yard score and a 6-6 tie.

ECHS scored when senior, Isaiah Johnson, jumped a pass route for a pick six. After a Walden PAT kick, the Wildcats took their first and only lead of the game, 13-6, the score at the end of the first quarter.

Gabe Zurmehly punched it in from five yards out and after he plunged in for the 2-point conversion, the Hornets took back the lead, 14-13.

The two teams uncharacteristically exchanged turnovers. Then, facing fourth and three on the 8-yard line, MCHS Coach LJ Harbison took a timeout. Dial rolled out and hit Blythe in the end zone to give the Hornets a 20-13 lead with 3:24 remaining in the first half. Zurmehly crashed into the end zone behind Cole Shive’s block for the 2-point conversion and a 22-13 lead.

Facing third and 17 on their next possession, the Wildcats used a big play to set-up a score before the half. Smith hit Walden on a 57-yard, Hail-Mary type pass that saw Walden out jump and maneuver several Wildcats defenders to give ECHS the football on the 5-yard line. Johnson would rumble in for the touchdown with 1:39 on the clock. Walden’s kick made it 22-20 at the break.

Dakota Shaw worked his kickoff magic to start the third quarter with a little help from Mason Estes. Estes recovered the kick giving Metcalfe the football and good field position but an interception setback the Hornet’s plan to add to their lead. William Shirley recovered a fumble to give Metcalfe back the football.

In less than two minutes, the fans had seen an onside kick recovery, an interception, and fumble recovery.

Dial connected with Blythe again for a touchdown and Metcalfe led 28-20.

Blythe continued having a career game when he returned a punt 40 yards. Devan Alderson rushed to the 8-yard line setting up a touchdown pass from Dial to Edmunds for a 34-20 Hornet lead with 4:24 remaining in the third quarter.

Luke Meadows and Michael Bennet teamed up for a sack and a tackle for a loss to give ECHS a 4th and 17 forcing a Wildcat punt.

After a Hornet punt, Smith hit Walden on a slant pass to the 36-yard line. Another great catch by Walden gave the Wildcats the football on the 7-yard line. Smith scrambled into the end zone and the Hornet lead was back to seven points, 34-27.

With 4:24 remaining in the game, and the history of these two teams and great comebacks, the faithful fans from both teams were watching the game and the clock. Edmunds made the catch and picked up the crucial first down with just over three minutes left. Dial ran twice for another first down and the Wildcats were forced to take their final timeout.

The Hornets milked the clock and the final seconds ticked off for the Metcalfe 34-27 win over Edmonson.

Zurmehly left the game early with an elbow injury late in the third quarter but still led the Hornet charge with 15 carries for over 140 yards. Alderson rushed 14 times for 59 yards. Blythe scored three touchdowns. Zurmehly and Edmunds both had a touchdown. Dial threw for three scores. Blythe also had an interception and led the team with five tackles. Bennet and Meadows both had four tackles and a sack.

In Coach Harbison’s post game radio interview, he noted that the game had its share of “ups and downs” and big plays by both teams. “The boys battled back for a great win,” he said.

Harbison was especially proud of his defensive line and ends, linebackers, and special teams in their performance the second time against ECHS. The coaching staff and team had worked hard to correct their mistakes during the last six games, and it showed on the football field.

Harbison gave all the credit in the world to the “boys in the white jerseys.”

Harbison was also proud of his offensive unit that made the big plays when they needed them. The Hornets responded to adversity with determination. When they made mistakes and had turnovers or gave up big plays to the Wildcats, they answered with big defensive stops or big plays on offense.

Harbison was looking forward to the Hornets playing “on the big stage” in Lexington this Friday night and thanked the “Hornet Nation” for their support and attendance during these tough COVID 19 times. “Thank you for your support all season,” Harbison concluded. “I think we beat the home crowd (Edmonson County in attendance) tonight.” 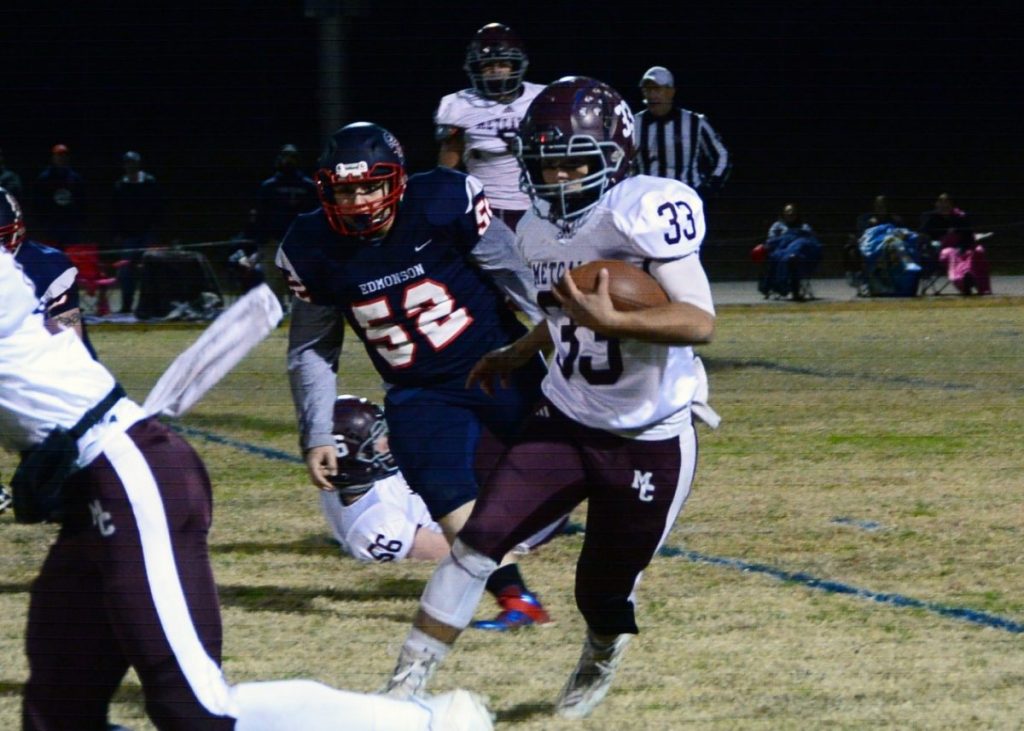 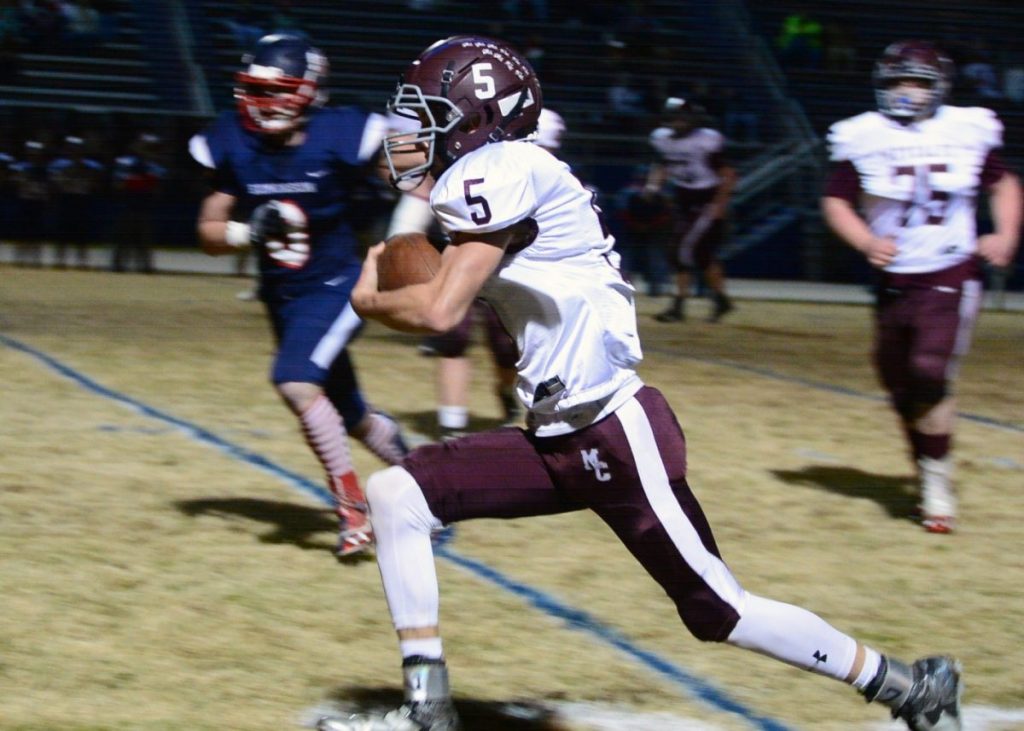 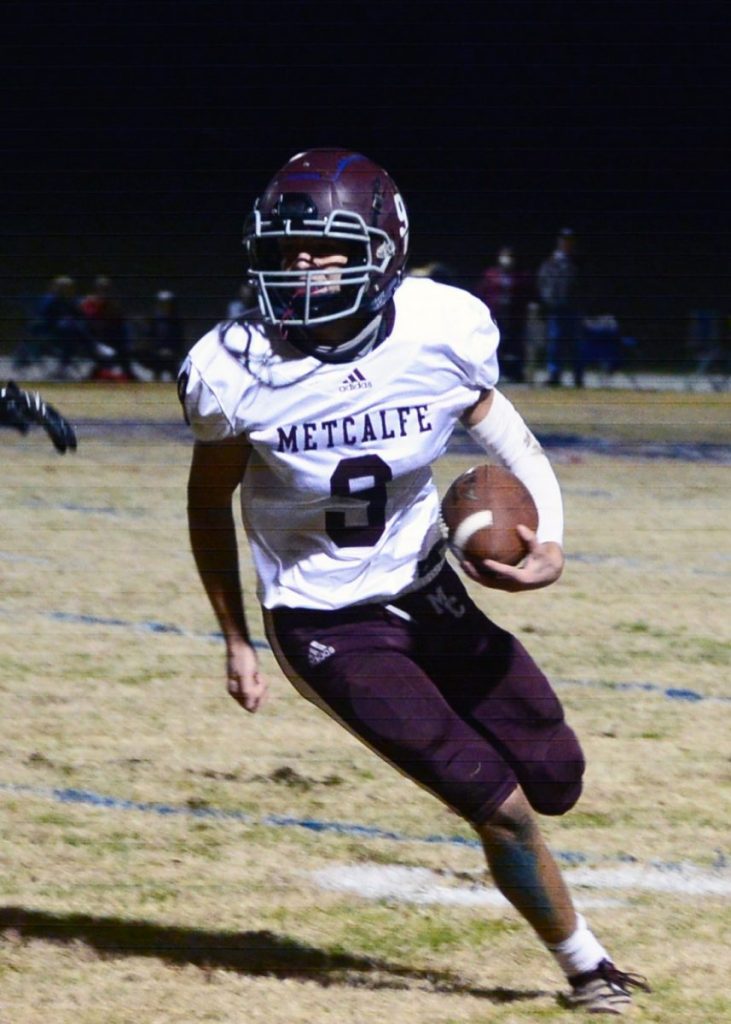 Hornet Quarterback Peyton Dial gains positive yardage. The Hornets tamed the Wildcats 34-27 to claim the 2A District 3 Championship and advance to the quarter finals of the KHSAA State Playoffs with the victory. Photo by George Katchak Jobe Publishing Photographer