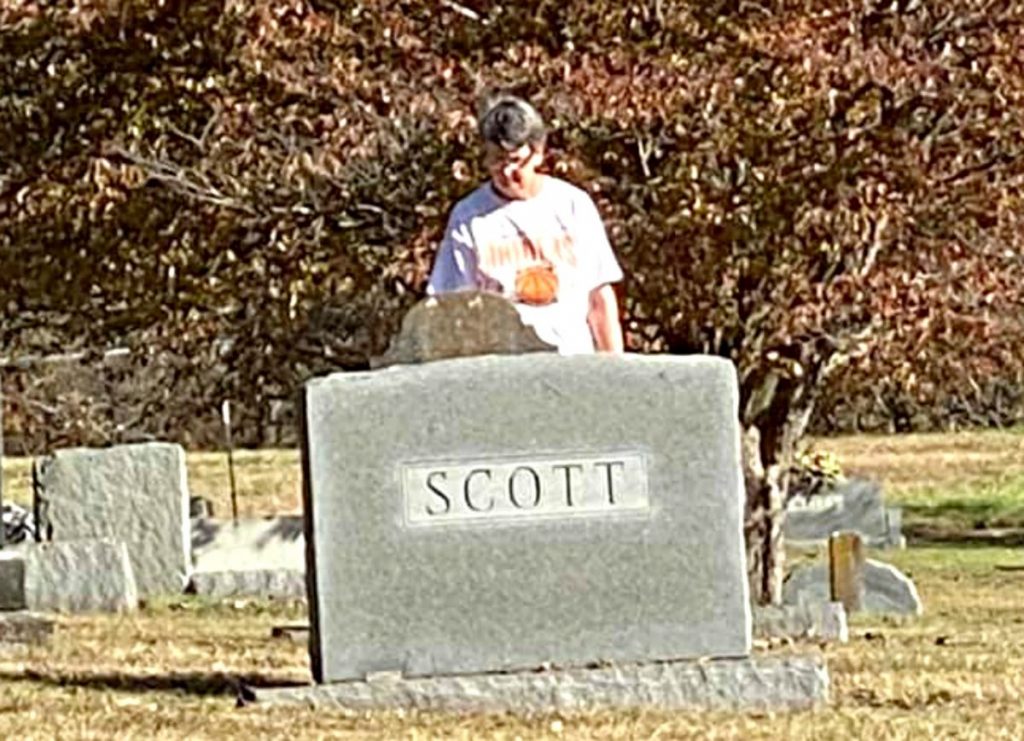 Brenda Dudderar finds great respect in helping to preserve the past. Photo submitted.

Preserving the past
Mary Beth Sallee

Volunteering is very admirable work. Often times, it consists of others dedicating time and effort to food pantries, toy drives, and children programs. Preserving the past

However, what many don’t realize is the need for volunteers at places most may never consider: local cemeteries.

And that is exactly what Jim and Brenda Dudderar, Patrick Goodman, Melissa Quigley, and others of the community did. They volunteered their time by cleaning the headstones at Pearl Webb Cemetery in Canmer.

Brenda, a retired teacher, was grateful to work with two of her former students, Patrick and Melissa, on this project.

“Patrick is the owner of The Shine Brite Co.,” Brenda said. “…He said he would really like to have a get together of people to learn how to clean old stones and preserve them in cemeteries.”

Although most projects for The Shine Brite Co. consist of larger, paid projects such as washing houses, hospitals, and courthouses, Patrick and his employee David Tapia volunteered free of charge. 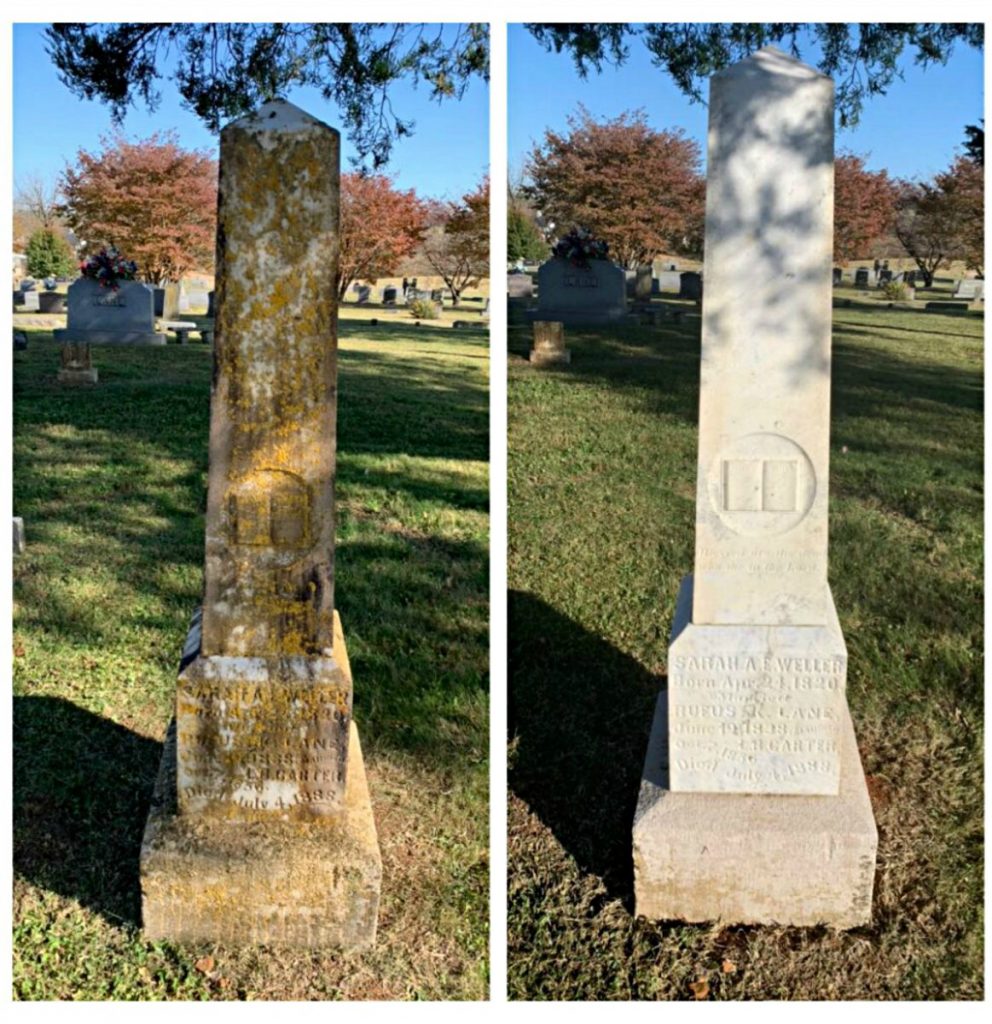 A before and after photo of headstones that were cleaned at Pearl Webb Cemetery in Canmer. Photo submitted.

“Melissa (Quigley) had contacted me one day. We got into conversation and she was cleaning one of her relative’s headstones,” Patrick said. “I had told her at the time that we had chemicals that would do a really good job on it. So, Melissa got some of the chemicals, and she done her family’s stones.”

“Mrs. Dudderar had hear about it, and she asked if she could get some of it also,” Patrick continued. “Of course we gave her some, but it wasn’t enough to do very many. She asked us if we could come by and spend a day at the cemetery.”

Patrick has cleaned many of the headstones at his own family’s cemetery. Therefore, tackling the job at Pearl Webb Cemetery was no problem at all. When Brenda contacted him, he was more than happy to contribute his services.

“We were looking for a situation that allowed us to do that, too, because I think we have something we can give back to the community that’s worth while,” Patrick said. “It was really a good arrangement. We have the knowledge, the chemistry, and all that stuff to make it (cleaning the stones) happen. So, we did.” 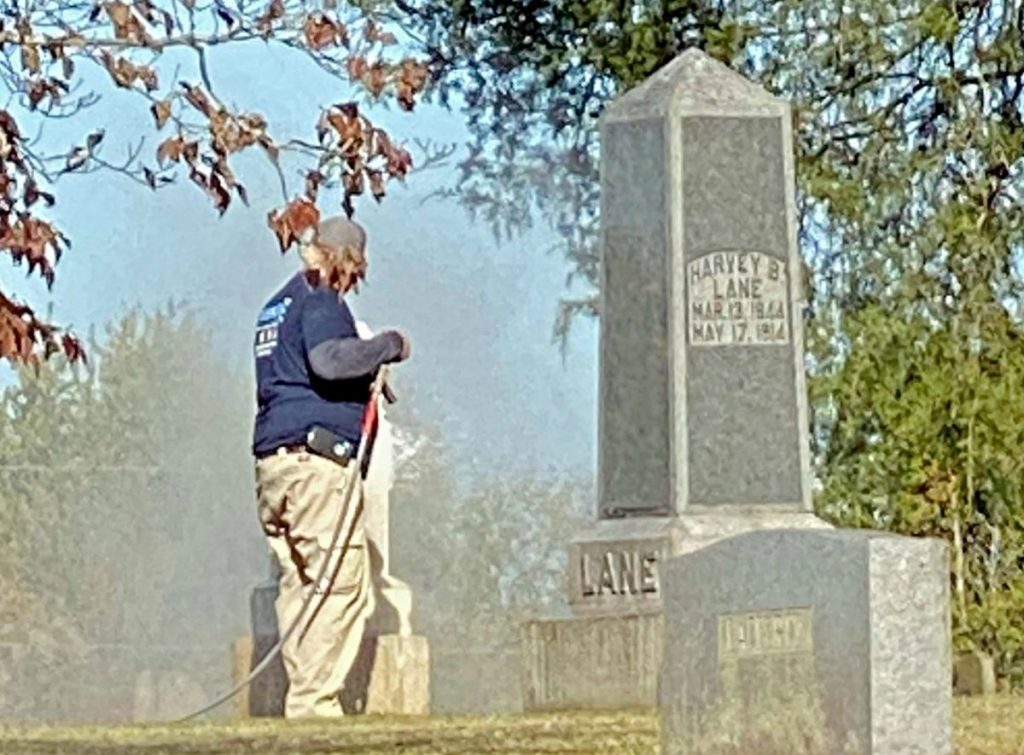 Patrick Goodman with The Shine Brite Co. volunteered his time and resources to clean headstones at Pearl Webb Cemetery in Canmer. Photo submitted.

Patrick explained that algae and mold begin to eat into old headstones after a while. He said it is very important to preserve these old stones as a show of respect and also preservation of the past.

“So, you take some of the stones from the 1800s. It’s really important if we want to keep those stones that we get them cleaned,” Patrick said. “Because if not, we’re not going to be able to read the face of it in another hundred years. We won’t be around, but the next generation will not be able to.”

For Melissa, volunteering at Pearl Webb Cemetery is very special as several of her family members are buried there.

“For me, each tombstone tells a story about that person and their family,” Melissa explained. “No one ever wants to be forgotten. So, keeping the tombstones clean helps to be able to read names and maybe read stories about them.”

“I love giving back to the community anyway I can,” Melissa added.

According to Patrick, approximately 30 stones were cleaned at the cemetery, with one being from the year 1888.

“I love to do this for the community,” Patrick said. “I’d like to make this an annual thing if we could…Those people (who have passed away) paved a path for us. They made our lives so much easier. The least we can do is give back a little bit to them.”