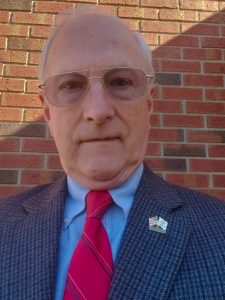 There were eight very deserving persons nominated for this year’s award and it was a very difficult choice for the committee of twelve to select just one. The nominees included Shane Chambers, Terry Edwards, Rhonda Glass, Chris Huffman, Bill Lytle, Allene Miller, Janey Miller, and Carol Perkins.

Bill Lytle and his wife, Myra moved to Metcalfe County in 1998, and since that time has been very involved in the community.

Bill is currently Military Officers Association of America-Newsletter editor, Cumberland Trace Chapter; Kentucky Colonels Member; Metcalfe County Extension Office Board of Directors Member. Precentor at 4-H annual American Private Enterprise System program for high school students; VFW Post 6281 Commander, (past chaplain); Edmonton United Methodist Church Lay leader/Sunday School teacher; Kentucky Veterans Hall of Fame nominated and accepted 2020; Bowling Park Bingo coordinator and worker for the VFW and American Legion sessions; American Flags Around the Square-Putting up and taking down of American Flags around the square; Veterans Day Essay Contest – Gathers submissions and judge for awards at Veterans Day Ceremony; Volunteers to take veterans to medical appointments if they have no other means available; Memorial Day and Veterans Day Ceremony Coordinator-assists in the coordination of these ceremonies that are typically held on the square;  Quilts for Veteran’s– assist in the coordination, submission, selection for recipients.

After moving to Metcalfe County in 1998, Bill has immersed himself in the betterment of the community. This has been through his involvement in the American Legion, VFW, Chamber of Commerce, Edmonton United Methodist Church, and various other community organizations.

After spending a career in the military serving our country, Bill decided to spend his retirement serving Metcalfe County and veterans. He utilizes his skills and experience from the military to bring order and efficiency to any project he undertakes or is a participant in. He is always willing to provide a helping hand or assistance where needed.

Since moving to Metcalfe County, Bill has poured his heart and soul into being a participant in making Metcalfe County a better place to live, work, and call home.