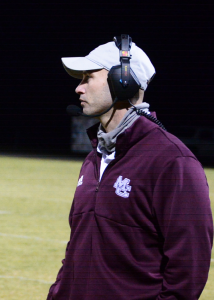 Coach LJ Harbison watches the Hornets intently during their 32-0 victory over the Falcons. Photo by George Katchak Jobe Publishing Photographer

Harbison and Hornets prepping for playoffs

Coach LJ Harbison and the Metcalfe County Hornets were playing their best football of the season as they were preparing to take on the 6A Barren County Trojans at the time this article was written. Peaking at the right time is important in any sport and football is not an exception.

The Hornets knew the importance of their three-game 2A-District 3 stretch against Monroe, Green, and Clinton County. Coach Harbison must be pleased with their three straight wins and the powerful football his team played when the Hornets knocked off the Falcons 32-0, crushed the Dragons 34-6, and gave the Bulldogs a 63-0 beatdown.

After losing their first district game to Edmonson County on a 37-yard field goal, the Hornets walked through the remaining games finishing in second place in the district for the regular season and prepping Metcalfe for the much-anticipated rematch in post-season play against Edmonson.

The Hornets will have to take care of business in the first playoff game with their opponent to be determined in the district game between Green and Clinton played in the final week of the regular season.

Coach Harbison and the Hornets had two tough seasons (1-9 and 2-9) back-to-back prior to this year, but the backbone of this year’s team stayed steadfast behind the leadership of Harbison and his staff. Several members of the junior and senior classes were there for that rough stretch and are reaping the benefits this season.

Down through the proud history of Hornet football, Metcalfe could always be counted on to play hard-nosed football and give their all regardless of the score in a game or their record. This was true before Coach LJ Harbison took over in 2014 from long-time Coach Freddie Harbison and continues under Coach LJ’s strong leadership.

Coach Harbison has surrounded himself with strong assistants and men, like Harbison, that are building character along with football players. When the names of seniors, Sawyer Edmunds and Gabe Zurmehly, are called, these are two names very familiar to the fans of Hornet football. Zurmehly has been a Hornet since his freshmen season and Edmunds since his sophomore year. They were there during the lean times and are being rewarded for their faithfulness to the program and the success this season has shown.

There are 14 juniors on the 2020 roster, and they too, are enjoying the success the team has had so far and are hoping to keep going deep into the playoffs. Members of this class were just freshmen when many took the football field in 2018. This group includes some other names familiar to Metcalfe fans including Devan Alderson, Jake Love, Wyatt Blythe, Chris Shaw, Dakota Shaw, Peyton Dial, William Shirley, Cole Shive, Hunter Fox, Rudy Wisdom, and Tanner Jessie.

“They’ve played a lot of football. They got beat up some, but they have always worked hard and even after a loss came back strong with good attitudes,” Harbison said. “They have matured and now they are getting to play some football as juniors and seniors.”

Harbison said one thing he saw even during the hardest times—like the two losses this year—was how close they were to winning. The point differential in many of those games during that two-year span was not that large. “We’ve got to find a way to finish,” he added. “We’ve got to capitalize on the other teams’ mistakes. We’ve got to take advantage of the turnovers we create.”

These two classes have been instrumental in leading the football program back to prominence but the dedication and talent level for Hornet football does not stop there. There are eight sophomores and five freshmen that Harbison is counting on to keep the Hornets in the win column. Sophomores Luke Meadows and Michael Bennett have become impact players already with others being groomed for the future.

Harbison bragged on the junior varsity players that competed in the second half of the Metcalfe 63-0 beatdown of Clinton. After the game Harbison said, “You couldn’t ask for a better performance by our JV.”

“We opened up our season with a good win over a quality Adair County football team,” Harbison began when asked to recap the start of the season. “We got behind by a score, but we were able to come from behind…execute in the second half and hold on for the win.”

Harbison said then they had two tough losses. “We got a punt blocked against Edmonson late—two minutes or so left in the fourth quarter and that set them up for long field goal that was tough to bite,” he continued. “We just didn’t execute and that can cost you against a quality opponent like Edmonson.”

Then Campbellsville was able to get the winning score in the last three minutes. “We didn’t capitalize on turnovers (four) we got,” He said. “We only capitalized on one of the four.”

“We are a team improving each week,” Harbison said prior to the Monroe victory. “It’s been a tough time with COVID, but I am proud of our guys and the way they responded to whatever has been thrown at us.”

Harbison was hoping to get a “little flow going and finish the season” as the Hornets prepared for their final 4-game stretch.

Boy did his team find the “flow.”

The Hornets have remained relatively healthy this year besides losing starting lineman Hunter Fox to injury early in the season with a hairline fracture (expected to be out six weeks at the time this interview was recorded).

Harbison said one of the teams’ strengths this year has been their line. “We’ve returned all our starting “O” line and three of the four starters on the “D” line,” he said. “We are able to play six or seven guys and that has helped us. Those are some tough kids and they show that on the football field.”

That was evident in the way they controlled the line of scrimmage in the 63-0 victory over the Bulldogs.

The offensive line opened up gaping holes for the running backs to run through and on defense, the line and linebacking crew wreaked havoc on Clinton’s attempts to get anything going on offense.

Harbison said the big plays made by his skilled players’ game-after-game had been fun to watch. “Each game, it’s been different kids stepping up,” he added. “We’ve got different players that can get the job done. You can’t just concentrate on one running back or one receiver. We’ve got two running backs (Alderson and Zurmehly) that can get the job done so neither one has to always carry the load. Peyton (Dial) has connected with three or more different receivers in one game for touchdowns.”

Harbison said they must continue to improve and put “teams away” when they put them on the ropes.

“They (his players) were hanging by a shoestring over the summer wanting to know what would happen to the football season,” he said. “They just kept working and wanting to play… to have like everyone else some sense of normalcy.”

“I am proud of them. We went through a lot together,” he added.

“We’ve come a long way, but we are not satisfied yet,” Harbison concluded. “When you get to Friday night about seven and it is game time—you get to go have some fun. We want to keep playing as long as we can and have fun. We were not sure we’d even be playing football at all this summer. We are going to enjoy every minute on the football field.” 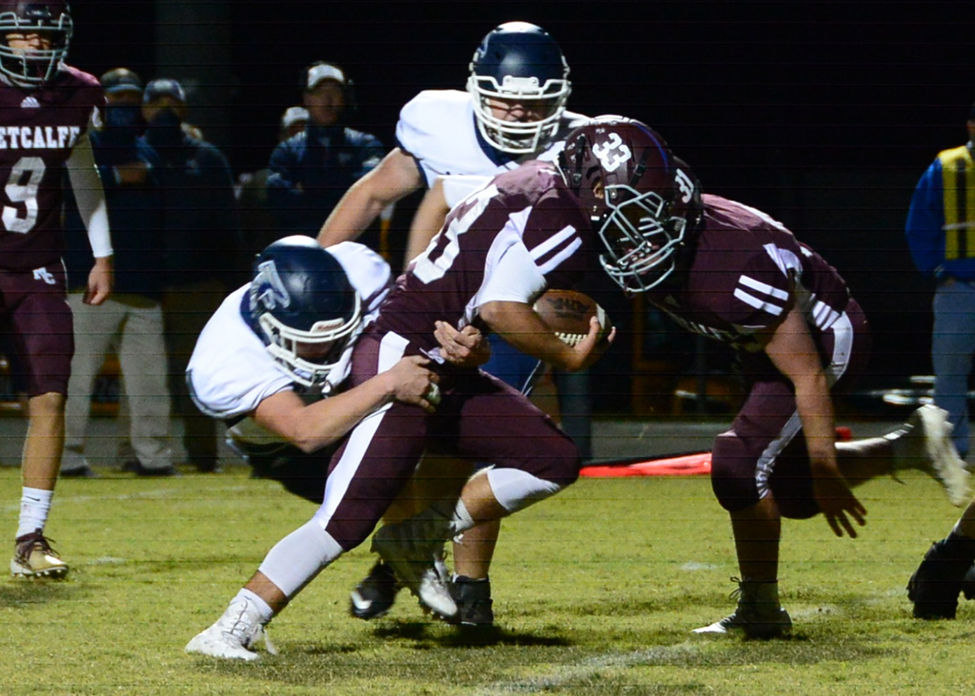 Gabe Zurmehly rushes for a big gain in the Hornets 32-0 victory over the Falcons. Photo by George Katchak Jobe Publishing Photographer