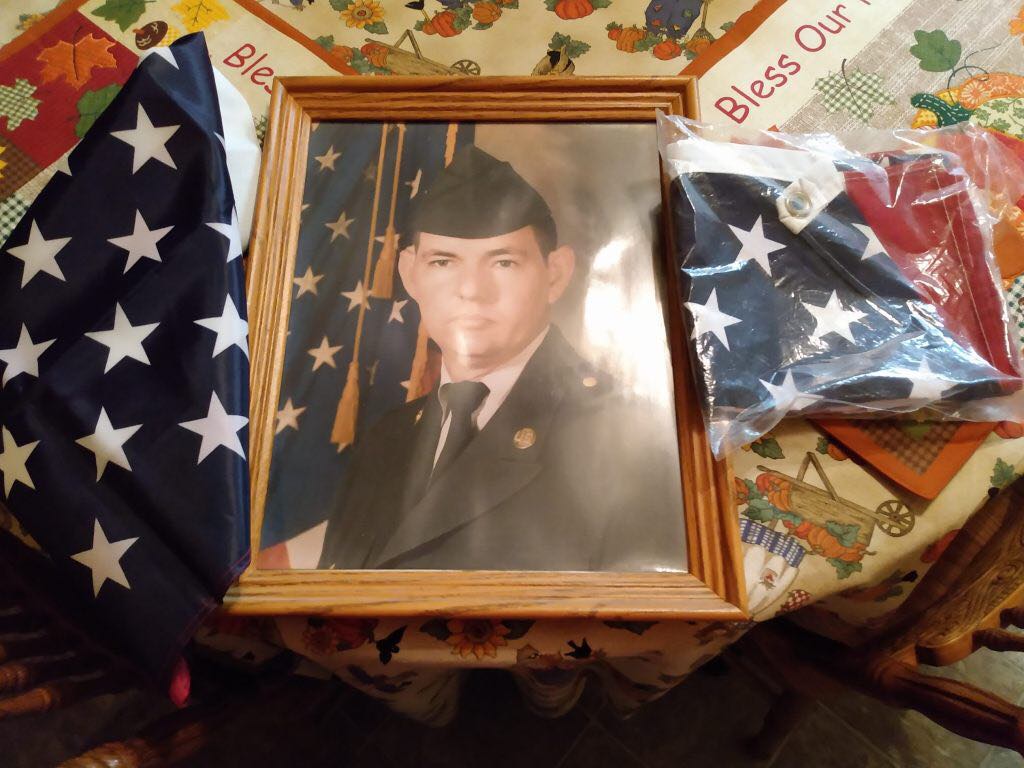 Harrold D. McGovern was 22-years-old when he enlisted in the Army. He served three years in the Vietnam War. Photo submitted.

“They got pinned down, and we went in there after them. And, that’s when I got introduced to the first fire back…I said, ‘Oh my God, what in the hell did I get into?’ And you think I was scared? You’re damn right I was.”

In 1966, Harrold D. McGovern was just 22-years-old when he joined the United States Army. The young man’s training began at Fort Knox and then continued on with air borne training at Ft. Benning, Georgia.

“From there, we marched out there to the air field, and we got in some of the biggest, damnedest planes I ever seen in my whole born days,” Harold said. “…The back end was up, and they were loading jeeps, everything that you think of…There were troops going in the front, troops going in the back, and them big son of a guns. Man, they were huge.”

Harrold was aboard one of those planes, and soon found himself traveling to a place known as Pleiku. He was headed straight into the Vietnam War.

The young man was a part of the Air Assault in Aviation in fighter helicopters and served as a door gunner and a pilot.

During his first night in Vietnam, Harrold was introduced to the Ho Chi Minh Trail.

This trail was a military supply route that ran from North Vietnam through Laos and Cambodia to South Vietnam. The route sent weapons, ammunition, manpower, and other supplies from the communist-led North Vietnam to their supporters in South Vietnam during the Vietnam War.

Harrold explained that about nine of the military helicopters, nicknamed Hueys, along with Apache helicopters went in with him and his fellow soldiers in a raid on a small camp.

“We got off the planes, and they had us out there in formation,” Harrold recalled. “And that big ole colonel come out there, and he said, ‘Store your gear, pull your helicopter, get ‘em ready, and combat load.’”

‘…We were supposed to be over here in police action,” Harrold continued. “Now we’re in combat. I said, ‘Oh my God, what in the hell did I get myself in to?’…When they called us out, we had to go in there and get them boys (fellow soldiers) out. Half the time, you didn’t know what you were gonna go up against.”

Harrold recalled that the battle at Ho Chi Minh began at about 8 o’clock that night. He and the others were giving it all they had, but more help was needed. Then, two U.S. jets came out of the canopy, straight down, and then directly straight back up.

“I said, ‘Them son of a bucks didn’t do a damn thing,’” Harrold said. “And all at once that whole valley lit up. I mean just lit up…No, they did something, that napalm. That’s what they used. They burnt that whole valley down through there.”

Napalm is a firebomb, a fuel gel mixture that was often used in combination with gasoline or jet fuel to make a bomb. The napalm bomb had a thin outer shell that exploded easily and ignited upon impact with a target.

During his time in the war, Harrold was fully aware of the horrible acts performed by the Viet Cong, the South Vietnamese Communists who were in support of the North Vietnamese.

“The Viet Cong would come in and just literally take the young guys and kill the rest, mutilate them,” Harrold said. “If you can imagine going into a meat market and see them slaughtered, that’s what they were. And they didn’t care. I mean, that’s the honest to God truth.”

“The old men they would kill or string them up,” Harrold continued. “Then they killed the women, and they’d take the young girls…I couldn’t believe somebody could do something like that to people. I mean, that’s the honest truth…I’ve seen it.”

The Viet Cong would resort to other tactics as well.

“You’ve got punji sticks, and you’ve got snares and all that in the jungle,” Harrold said. “You gotta watch for trip wires. I mean, it’s a lot more than just moving through the woods there.”

Punji sticks were a type of booby trapped stakes that the Viet Cong would place in areas likely to be passed through by American troops. The punji sticks would be camouflaged by natural undergrowth, brush, or similar material. Often times, a pit would be dug with punji sticks in the sides. The Viet Cong would also sometimes coat the sticks in poison from animal venom, plants, or even human feces which would cause infection or poisoning in the victim after being pierced by the sticks.

But perhaps the most difficult danger to fathom was how the Viet Cong would use women and children to carry out attacks against American soldiers.

“When you see a little kid running across the air field with a lard can…9 times out of 10 he’s got grenades in there getting around them soldiers,” Harrold explained. “A woman, she’ll strap claymores around her and act like she’s pregnant. That is what we had. We had more people trying to kill our soldiers like that then out there on the battlefield.”

But while Harrold said he was often scared in the midst of such evilness, he found comfort in a small Bible that he carried with him. He would read and recite Psalm 23, “Yea, though I walk through the valley of the shadow of death, I will fear no evil…”

Harrold spent three years in Vietnam. He was signed up for six years of service, but suffered a leg injury in 1968.

“On the back of the helicopter, you got a life line (harness),” Harrold explained. “My snap wouldn’t stay closed, and I told Captain they didn’t fix my snap when I went into the hangar.” 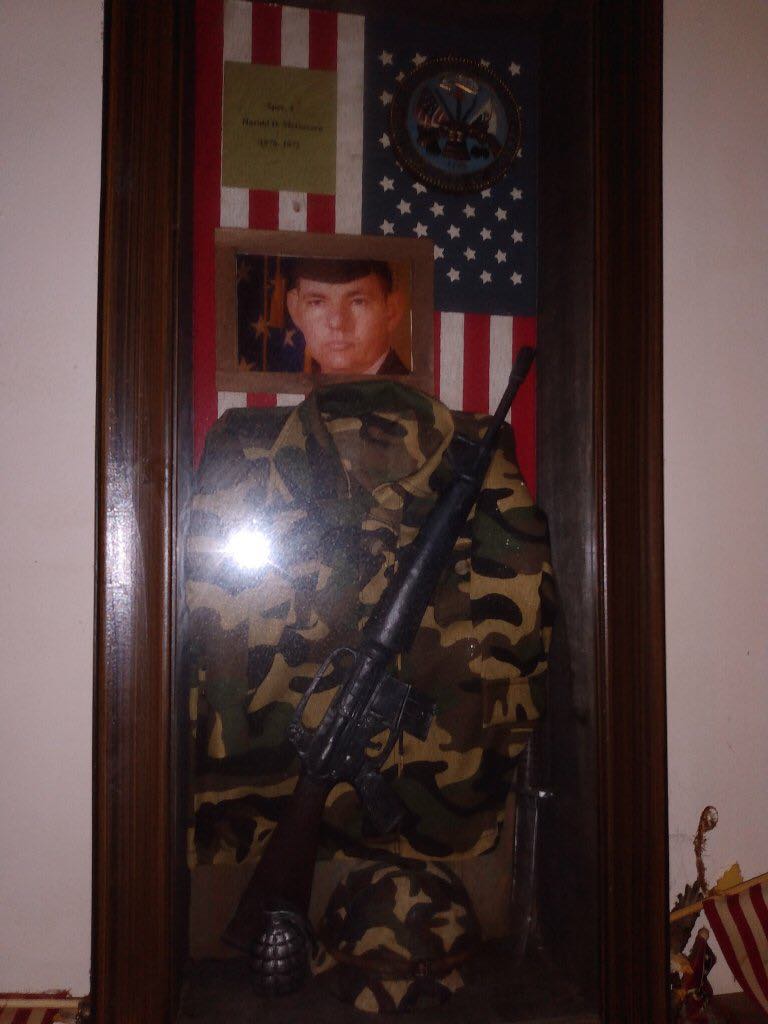 Vietnam Veteran Harrold D. McGovern was part of the Assault in Aviation in fighter helicopters and served as a door gunner. Photo submitted.

“He (the pilot) made a roll, and when he made a roll I come out of that gunner part, and I fell about 30 feet down,” Harrold added. “…I rolled up in a ball. I knew I was gonna hit, and I tried to save my back, head, and everything like that, but I went down on my foot…I jammed my bones in my foot.”

The young soldier was in the hospital for almost a year and two months. Harrold was first taken to a field hospital and then to Germany. He was then shipped back to the U.S. and received care at Ft. Knox.

However, upon his arrival back in the United States, Harrold realized that not all were appreciative of the sacrifice that Vietnam veterans made.

“I come back home here in the United States, and they’re throwing (slurs of) baby killers and everything up at us,” Harrold said. “

Traumatic memories of the war also affected Harrold once he returned home.

“When we come back home, I told my wife, ‘Whatever you do, do not put your arm around my throat at night,’” Harrold said. “It went on about a year. I couldn’t stand that. But (in Vietnam) you sleep with a pistol or you sleep with your M16 beside ya.”

Harrold also lost many buddies and fellow soldiers in the war who he thinks about often.

“Yeah, I tell ya what. I wear that hat and I got an emblem on it, and that’s the guys on the (Vietnam Memorial) wall,” Harrold said. “They are the heroes. A lot of people said, ‘Well, they died.’ No, they gave their lives over there for our freedoms. When you lay down your life on something like that, you are the hero.”

But despite the many losses of which the Vietnam War brought, Harrold is thankful for his veteran friends who also reside in Hart County. Those friends include a guerilla fighter who was in the jungles and was a door gunner on the helicopter, a doctor who flew helicopters, and a tunnel rat.

“See, over there they had tunnels, these snipers and everything,” Harrold said. “Then they (U.S. soldiers) find the tunnel. You got a 45 and a flashlight. You go in that tunnel, root ‘em out. Now when he (my friend) told me he was a tunnel rat, I said, ‘Good God! What in the hell did you get yourself into?’ He said, ‘Well, if you get past six-foot, you’re alright.’ I said, ‘Yeah, you get past six-foot you’ll get your ass blowed up, too.’”

“We were one family. That’s all there is to it,” Harrold added of his friends then and now. “When you have your little group, you was a team. You covered each other.”

Many years have passed since the Vietnam War. While Harrold said he would gladly serve his country again, he wonders if the U.S. Government officials knew what they sent their soldiers into.

“It (the Vietnam War) would be alright if we fought for it, in other words gained something for it,” Harrold said. “What did we gain? We didn’t gain a dang thing. And I’ll tell ya, our officials would not stand behind the soldiers over there…‘Til they can stand behind a soldier and see what the heck’s going on over there or any kind of battle…Plain out war is not pleasant. I’ve seen combat and yes, it wasn’t pretty.”

But no matter the war or the political division that may accompany it, Harrold said all veterans need to be understood and thanked.

“They (people) really don’t know what a veteran goes through, a combat veteran and what they have seen,” Harrold continued. “But pray for them and tell them hello for us because they know what went on.”

Harrold said that experiencing what he did in Vietnam made him truly appreciate what he has at home.

“That’s the honest to God truth,” Harrold said. “You appreciate a lot more, and I guarantee you, you will look at the Lord a lot harder. I will say that.”

The Hart County News-Herald and the Jobe Publishing team is forever grateful to Harrold D. McGovern and the many other Vietnam War veterans who deserve appreciation and respect for their service.