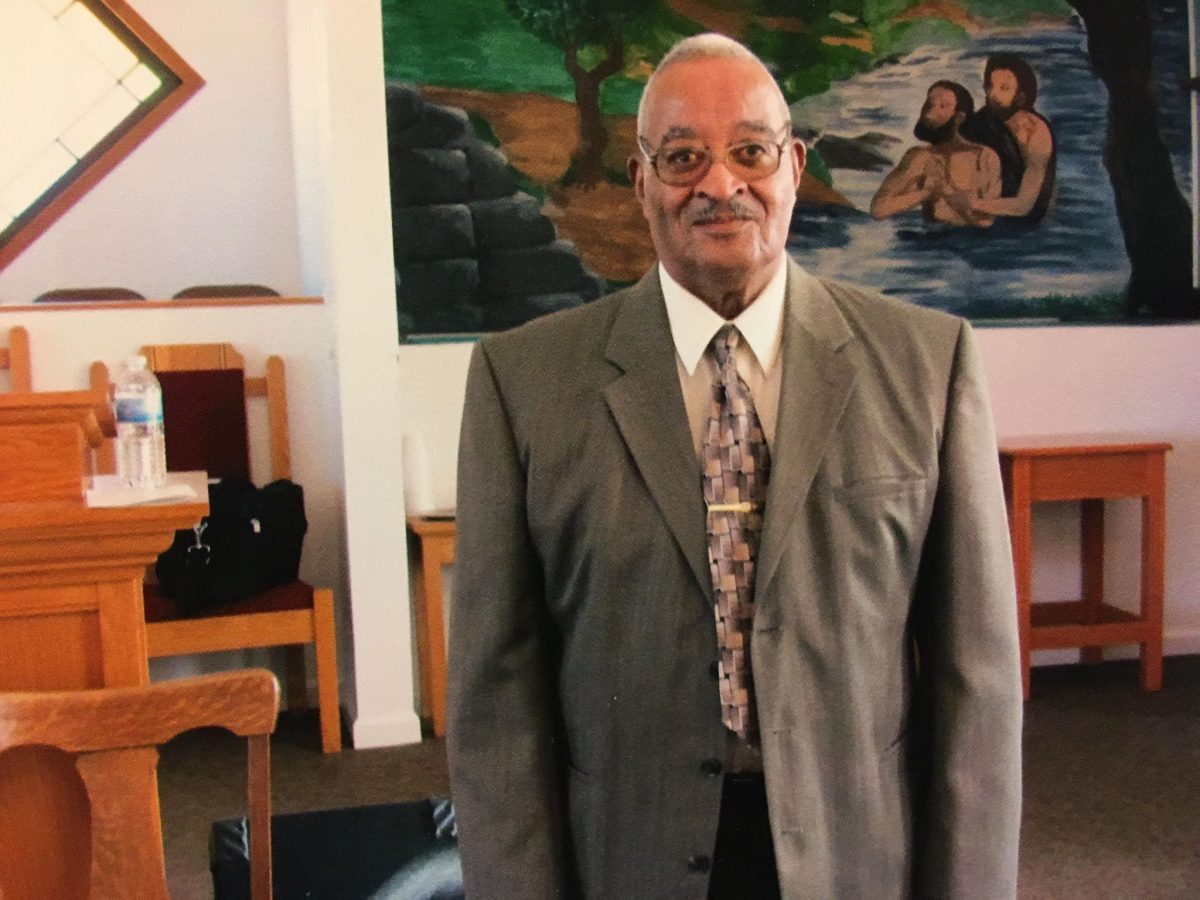 In the 1940s, Hezie R. Richardson was a young black man living in Hart County during a time when most of society judged him because of the color of his skin.

“Different water fountains, white and colored,” Hezie recalled. “Restaurants were segregated, go in the back….Most of the time we had to walk to Horse Cave to some little outside, junked out restaurant. It was just kind of rough. I wouldn’t want nobody to go through what I went through.”

But there was one thing that knew no race during that time in America: the draft.

In January of 1943 at 22-years-old, Hezie received a letter and found himself drafted to serve his country in World War II.

When asked how he felt about being drafted, Hezie chuckled, “I don’t think you want to know.”

“They picked us up down here at Bear Wallow,” Hezie said. “A lot of us in Horse Cave, about 12 of us, were drafted at the same time.”

Although he wasn’t thrilled about being drafted and heading to war, Hezie still hoped that it would be a change from what he was experiencing at home. However, it wasn’t.

“When I first went in, there was segregation in the Army, black units and white units,” Hezie said. “…It’s a whole lot of difference now than it was then.”

Hezie was first sent to training at Ft. Benjamin Harrison in Indiana.

“We took a few training there, but they shipped us to Greenwood, Mississippi,” Hezie said. “…We didn’t know, was just a week, we didn’t know nothing…Got there and had this captain, I don’t know where he was from. Great big guy. He hollered at us, and we went every which a way. We didn’t know left from right, you know…It was pretty rough because we were dumb. We didn’t know what was going on.”

Hezie was in Mississippi for nearly two years before being moved again, saying he felt like an ugly duckling that didn’t stay in one place for very long.

“I left Mississippi, went to Shreveport, Louisiana,” Hezie said. “They took me out of the Air Force and put me in the infantry training there. Then they shipped me from there up in Illinois and back to the Air Force. Let’s see, where did I go from there? Oh yeah, went down to Alabama and then from Alabama went overseas.” 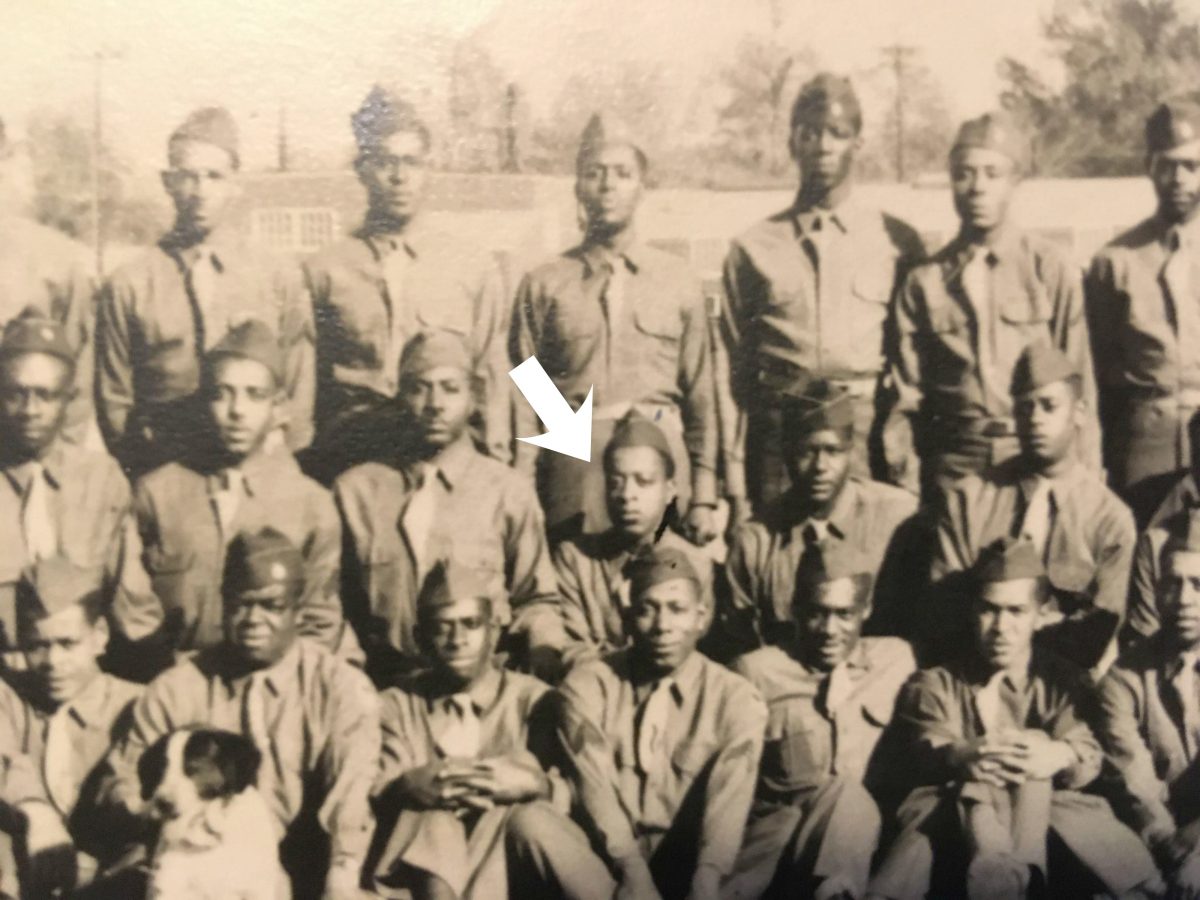 Hezie R. Richardson, center, was drafted into the Army in 1943. He is pictured here in his training unit. Photo submitted.

In 1945, Hezie spent 42 days on a ship headed to a destination that was foreign to him.

“It wasn’t all that bad (on the ship),” Hezie said. “They fed us two meals a day, kept a line going all the time. Each one had a card, different color.”

Although Hezie did not experience sea sickness, he took advantage when others on the ship did.

“I’d get their food and eat it,” Hezie laughed. “They didn’t want it. I think that’s what kept me from getting sick.”

Hezie served in the Army, Air Force, and Infantry in WWII. He said he didn’t see any combat as the war had ended when he was sent overseas.

“It wasn’t bad,” Hezie said of his service. “…I didn’t see no action. I was traveling more than anything, from one place to the other…Some of it was good, and some of it wasn’t so good. It was according to where they sent me.”

While overseas, Hezie found himself in the European and Asiatic Pacific Theaters of Operation. He was in Italy, the Philippines, and Japan. He even saw the Leaning Tower of Pisa.

Hezie arrived overseas just after the bombing of Nagasaki and Hiroshima.

“We were mostly cleaning up those bombed out buildings,” Hezie said. “We were cleaning up, getting them where they could live in them…Well, we lived in the bombed out houses.”

Hezie also served as a truck driver. He said he mostly transported other soldiers, taking them from one place to the other.

“They moved me around a whole lot, but I got to see a whole lot and do a whole lot of different things, ya know,” Hezie said. “Light truck driving, heavy duty. I was in a refueling unit.”

According to paperwork, Hezie was a “…truck driver, heavy, who drove all types of Army wheeled vehicles from 1/2 tons to 7 1/2 tons. He hauled personnel, equipment, gasoline, and drove day and night all over all types of roads and under combat conditions. While overseas, he drove dump trucks, transported dirt and sand for construction of air fields and roads, and was familiar with operations of all makes of trucks used by the Army.”

Reminiscing about his truck driving duties in Japan, Hezie told the story of the time when he was ordered to take a couple of lieutenants to Yokohama.

“(I had left) that morning, and I didn’t get back to camp til that evening. Almost out of fuel,” Hezie laughed. “Now I was scared.”

When asked if he had any more stories to tell, Hezie chuckled once again and said, “I don’t wanna tell ‘em.”

While serving his country, Hezie earned the rank of Technician Fourth Grade (T/4 or TEC-4), which was one of three United States Army technician ranks established. He was also a Grade CP1 Corporal and Private Tech-5 Truck Driver.

After serving his country in Europe and Asia for 12 months and receiving an honorable discharge, Hezie returned home.

And yet, nothing had changed.

Although Hezie and other black soldiers had served their country honorably in WWII, risking their safety and lives, they returned home only to be segregated once again.

“It was kind of bad,” Hezie said. “Feelings were kind of hurt.”

“I thought life would be better in the Army than what it was here because things were pretty rough (at home),” Hezie added. “…At that time, the Army was better.”

However, Hezie persevered through the turmoil and hardships throughout his life. He has worked as a farmer and for the state with construction on roads.

Hezie and his wife, Alene, were married nearly 70 years before her passing in 2014. They have five children: Wanda Haskins, Doris Peden, Betty Bush, Mary Clark, and Roy Richardson. They also have seven grandchildren.

Hezie received his education through the fifth grade in a one-room school in Uno associated with Bear Wallow Baptist Church. The building is still there, but is now used as a lunch room. 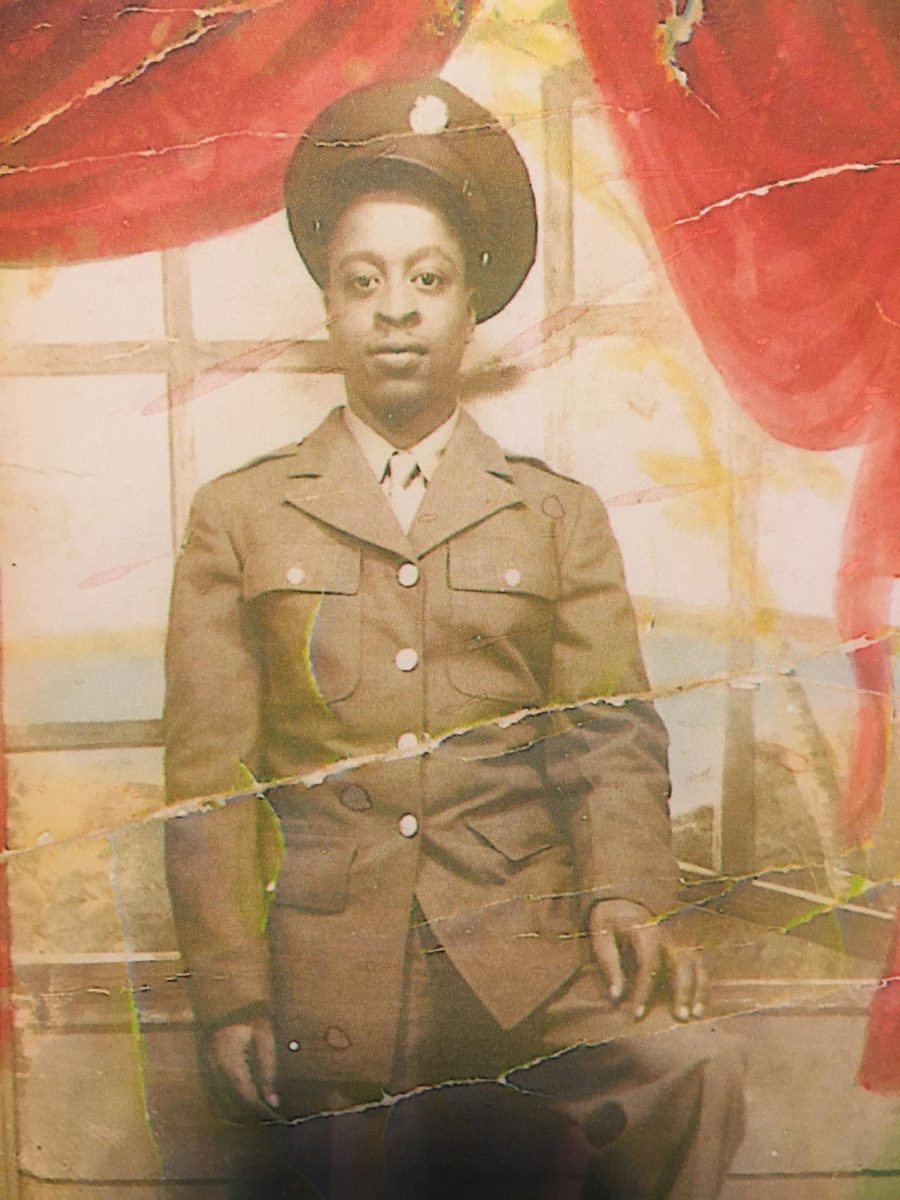 “For someone that went to the fifth grade, he knows more than we do, and he can add and subtract faster than we can with the calculator,” Betty said. “He said he learned a lot when he was on the ship. He learned to use a typewriter because they didn’t have to pay for stamps or anything…He’s a smart man.”

He has also been a deacon at Bear Wallow Baptist Church for over 60 years.

“It’s a blessing,” Betty said of her father. “We’ve learned a lot from him, being patient for one thing.”

The veteran has lived in his current home for 62 years. While he had no issues purchasing his home, he did have trouble keeping it at one time.

Hezie’s daughter, Betty, told the story of how a local man helped her father keep his family’s home.

“Horse Cave Bank was getting ready to come and take it (the house),” Betty said. “They was getting ready to take it for $2,500 dollars. Daddy called James Eastern Chaney. He was the president of Canmer Bank. Daddy went up there and met him at the bank at night time. He went in there and wrote you a check and told you to pay it off?”

“It showed that even back then, there was good people in both races,” Betty said. “But there wasn’t too many people gonna take you and open a bank at night time and do that for you.”

Flash forward to the world today, and Hezie said he isn’t sure what to make the country’s current situation.

“I don’t know how to put it, but it looks to me like, you know, we was doing pretty well,” Hezie said. “Now, I believe it’s turning and going the other way. I don’t know whether that makes sense or not, but things have been better than they are now.”

When asked what the secret if to a long life, Hezie simply replied, “Hard work.”

One of Hezie’s granddaughters, Lakeisha Meyer, wrote about her grandfather in 2018. In the writing, Lakeisha stated: “The smartest man I know doesn’t have fancy degrees and letters behind his name. He taught me that book smarts isn’t the only way to get ahead in the game. What matters most is how you treat people and where you put your faith. My granddaddy taught me patience and that good things come to those who wait…”

It is without a doubt that Hezie has seen his fair share of hardship during his 99 years of life, having served in WWII and lived as a black man during some of the most tumultuous and unfair times in America. But, as written by his granddaughter, with faith and patience he has persevered to become the strong and kind man that he is today.

Hezie R. Richardson is what we at the Hart County News-Herald call a true American hero.