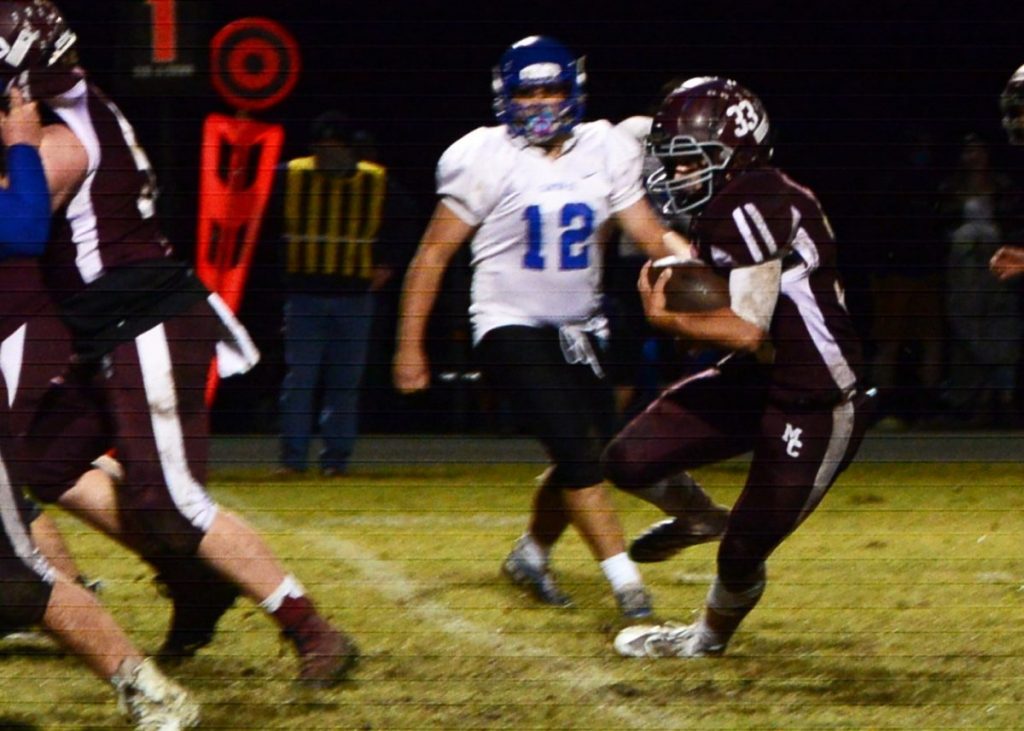 Coach LJ Harbison and the Metcalfe County Hornets knew the importance of their three game 2A-District 3 stretch against Monroe, Green, and Clinton County. Coach Harbison must be pleased with their three straight wins and the powerful football his team has been playing.

After losing their first district game to Edmonson County on a 37-yard field goal, the Hornets walked through the remaining games finishing in second place in the district for the regular season and prepping Metcalfe for the much-anticipated rematch in post-season play against Edmonson.

The Hornets will have to take care of business in the first playoff game with their opponent to be determined in the final district game when Green and Clinton square off this Friday night. If the two teams record indicate anything, MCHS will be playing Green in round one of post-season play.

Harbison and the Hornets are taking nothing for granted and will play 6A Barren County to help tune-up for the playoffs this Friday night.

The Hornets wasted no time taking control of the game against the Bulldogs. They were up 21 to 0 in the first quarter when Michael Bennett hit a Bulldog so hard, he coughed up the football. The Hornets scored again on that drive and soon led 36-0 starting a running clock before the first half ended.

To say the Hornets controlled every facet of the football game almost sounds like an understatement.

MCHS dominated CCHS and the score could have been worse.

Look at just these halftime stats with MCHS leading 43-0. Gabe Zurmehly rushed 15 times for over 140 yards and three touchdowns. Peyton Dial threw for over a hundred yards with three touchdown passes to Wyatt Blythe, Sawyer Edmunds, and Rudy Wisdom. Blythe also had an interception. Bennett already had six tackles by the break and would score the first TD of the second half. With Dakota Shaw’s sixth straight extra point, Metcalfe led 50-0.

The offensive line dominated the line of scrimmage from start to finish and the Hornet running backs took full advantage of the big holes they opened up.

Dial picked up 40 yards on a broken play to set up the next Metcalfe TD. Bennet rocked in for his second TD of the night. Shaw proved he was human shanking the kick to the left with Metcalfe’s lead now 56-0 near the end of the third quarter.

With six minutes left in the fourth quarter and the Bulldogs threatening to get their first score, #22 Aiden (8 tackles) intercepted a pass preserving the Hornet’s second straight shutout.

Devan Alderson reached the end zone for the seventh MCHS touchdown and Shaw’s boot was true for the final score of 63-0.

In Coach Harbison’s post-game radio interview, he praised their overall play and noted the Hornets got a measure of revenge after Clinton had beaten them pretty handily for the last two years “Peyton threw a couple of ducks that we all made fun of but it all worked out in the end (Dial connected on fourth down TD passes to Wisdom and Edmunds),” he said with a laugh. “He executed those two passes to perfection. The kids are buying into what we want them to do and starting to have that chemistry.”

Coach Harbison noted they had no punts and that the junior varsity put up three TDs. He was glad that the younger players got some valuable playing time and seeing players that transferred into the program help the team. He said he loved the seniors, juniors that come in and have never played football but buy in and make great memories being part of a team. “I wished I would have coached them for four years. They will be talking about this (their football memories) to their kids for years to come,” he said.

Harbison also praised “up front where it all starts.” “Up front we played phenomenally,” he added.

The defense has only given up six points in their last three district games. “You couldn’t ask for a better performance by our JV,” he said of their efforts to preserve the shutout when his reserves got a chance to take the field.

“He (Shaw) has stayed after practice three or four days a week and it has paid off,” Harbison said of his kicker who kicks 20 or 30 balls during those extra sessions. “I think that’s six turnovers our kicking game has had.” 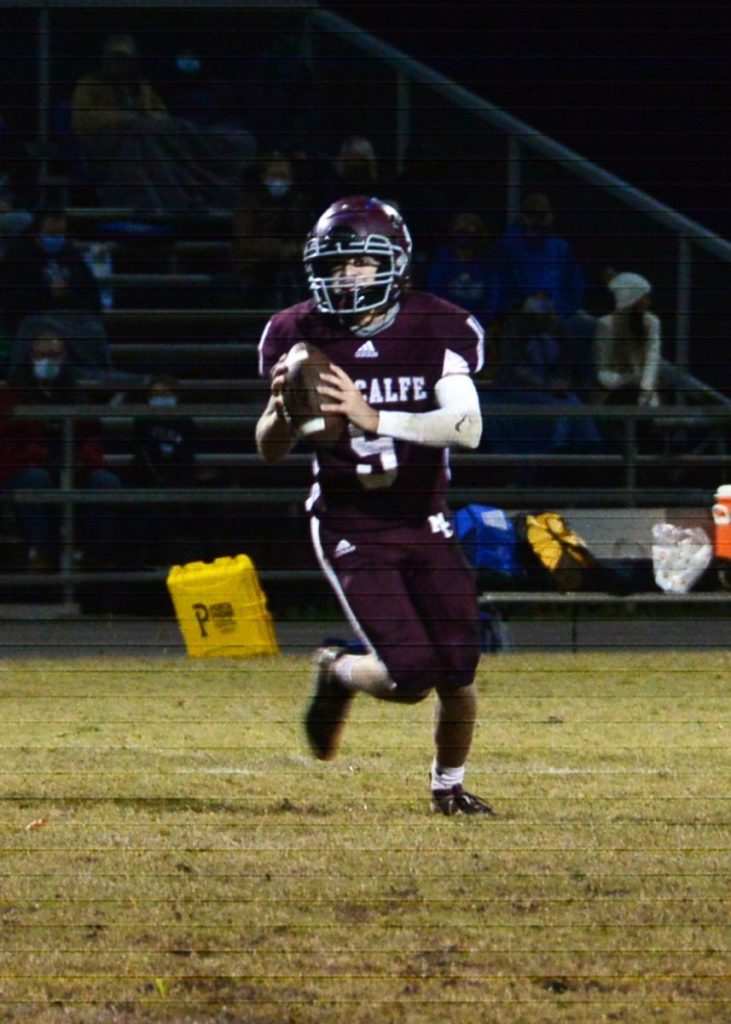 Peyton Dial drops back to pass in the Hornets 63-0 victory beatdown over the Dragons. Photo by George Katchak Jobe Publishing Photographer

The Hornets take on Barren County at 7:00 PM on the road this Friday night. 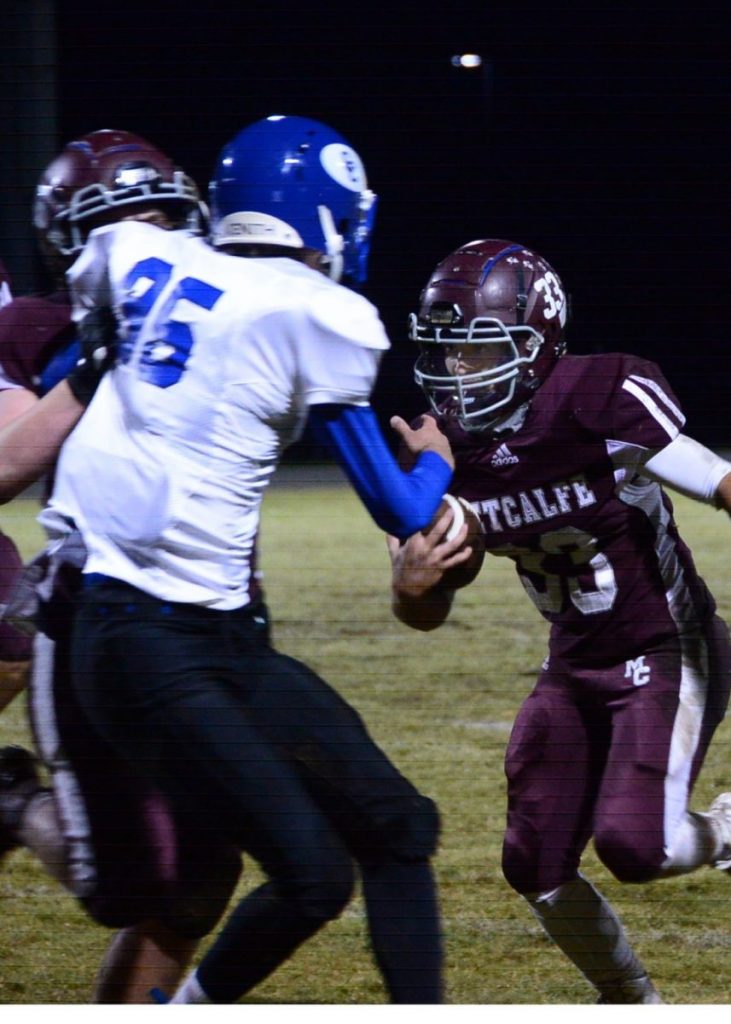 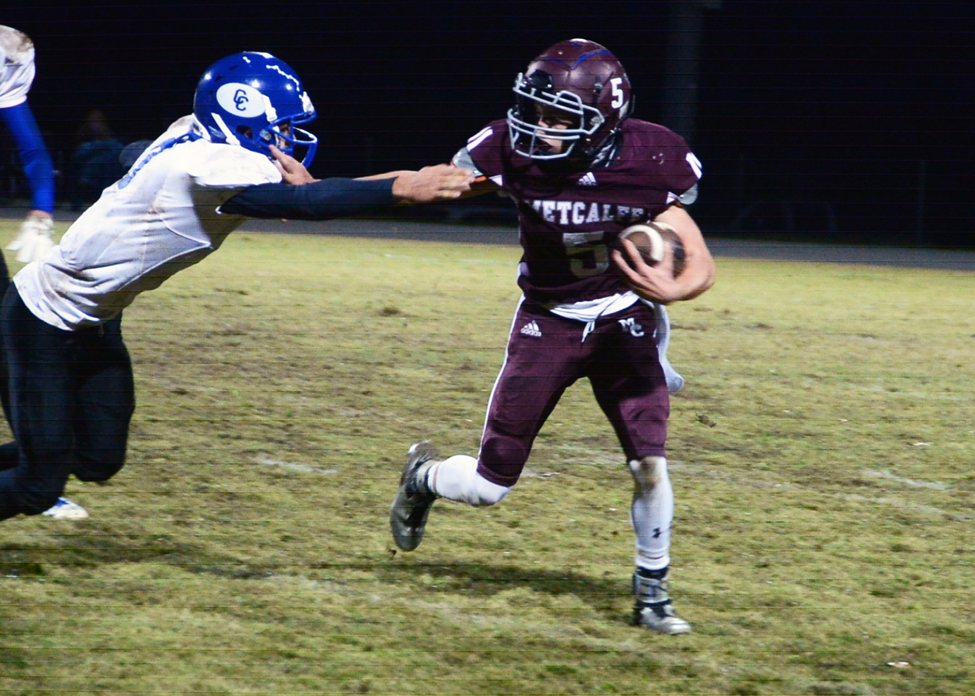 Wyatt Blythe stiff arms a Dragon after the catch in the Hornets 63-0 victory beatdown over the Dragons. Photo by George Katchak Jobe Publishing Photographer