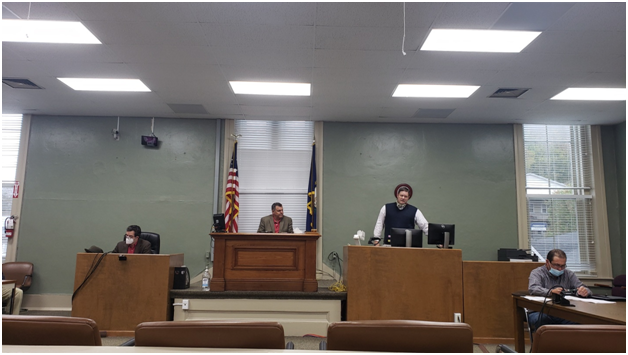 The Edmonson County Fiscal Court met in session on October 26.

County Clerk Kevin Alexander reported on the voting progress. Alexander reported that so far the clerk’s office have had 1,175 mail in ballot requests. Estimated in person voting is estimated to be 1,600 ballots already turned in, with 300 turned in on Friday and 145 on Saturday.

Also during the meeting, the road report mentioned the land procurement at 3020 Veterans Memorial. A $20,000 down payment has been made. It will be split 60% general, 40% road. The road report also showed repairs made at Bridge Road and Hawks Road, R Kelly Road, Reid Road, Lewis Road, Reagan Road, Lakeshore, Francesca and Soranto Drive, Stonehill, Wilderness, Lakeshore, American Rock Road, Cedar Grove Road, Bailey Branch, and three bus turn around zones and a re-wrapped ditch line on Pinner Road (FEMA). It was also reported repairs were needed on some road equipment totaling $9,800.

Clean up week reported 27 dumpsters were filled, approximately 40 tons. An estimated 5 1/2 tons of recycled material was collected, which will be sold, and that money will go back into the general fund.

A meeting for Rec Tax was held on October 19. The next meeting is set for January 25th at Edmonson County Courthouse.