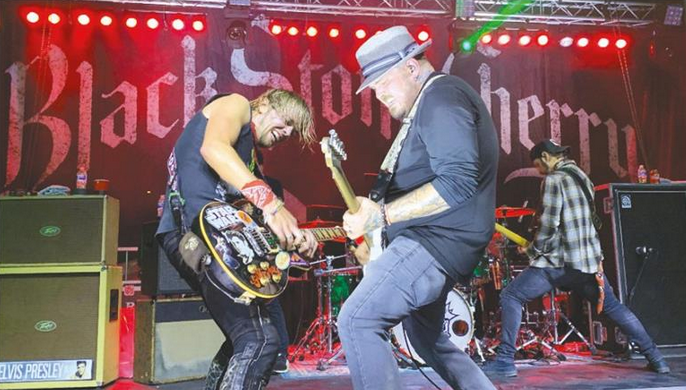 While at the drive-in Kentucky Headhunters concert last month, Black Stone Cherry guitarist Ben Wells mentioned to Glasgow Police Chief Jennifer Arbogast that his band would like to do something similar for the community as well.

“One thing lead to another and before you knew it, we were being asked to put on a hometown concert for the rock band,” said Entertain Glasgow Committee member Katie Hawk.

Hawk said it took a couple of brainstorming sessions and conversations with the band’s management and the committee for Entertain Glasgow to work out a way to set up a social distanced performance. They set up approximately 200 10×10 pods and placed them six-feet apart to follow CDC guidelines.

The event was sold by pods. Each pod purchase included six tickets to the concert to be watched from that specific pod.  Masks were required when not in the pod. Food and beverage services were not provided. Therefore, attendees were encouraged to bring their own food and beverages.

The surprise concert was announced on October 1. Tickets went on sale October 2, and the 200 pods sold out by October 6.

The weather turned very wet and stormy the day of the event. But fortunately, mother nature allowed the show to begin shortly after the anticipate 7:30 start time.

The Josephines, a Bowling Green band that has performed with Black Stone Cherry several times, opened the night with a 45 minute set followed by the first live performance by Black Stone Cherry since February. Both bands rocked Glasgow. Just over 800 tickets were scanned for admittance to the event.

“Thank you for all the hard work,” said Damian Lynch, an attendee from Scottsville. “It was a great time to have a night of somewhat normalcy amid COVID.”

“We thought it was incredibly well organized, and we are so thankful for the opportunity to catch a Black Stone Cherry concert this year,” said Teresa Bowlin, another out of town attendee from Muncie, Ind.

Perhaps one of the farthest road trip attendees was Joyce Hall and her husband who drove from Texas.

“Everything was awesome…from signing in to traffic…answering any questions with smiles…Please do anything with BSC…” Hall said. “We would drive from Texas again and again.”