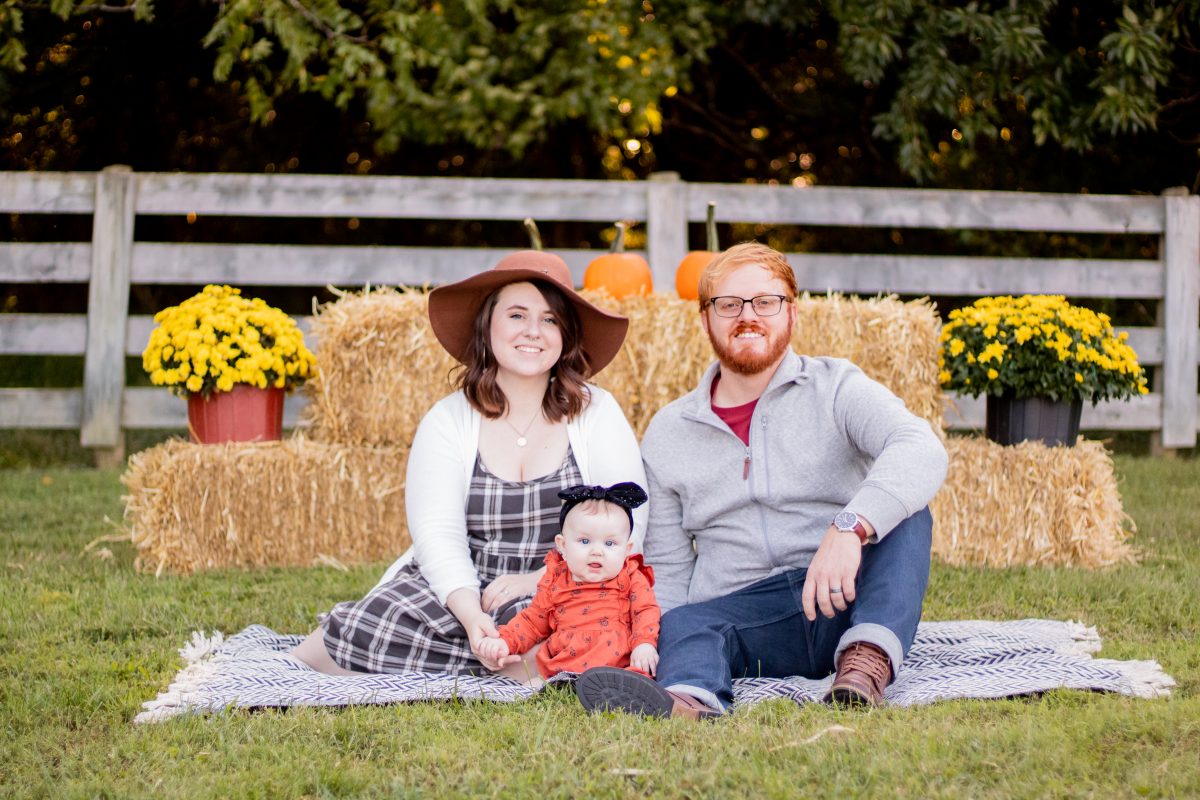 Although Telia and Adam Thompson were heart broken after the miscarriage of their first baby, they now find joy with their daughter, Ashlin. Photo submitted.

In 1988, President Ronald Reagan declared October as Pregnancy and Infant Loss Awareness Month. This served as a way to recognize the grief of bereaved parents and to also show support for those who have suffered such a tragic loss.

According to the Star Legacy Foundation, a non-profit organization dedicated to increasing awareness and promoting education for pregnancy and infant loss, 1 in 4 women will lose a baby during pregnancy, delivery, or infancy. Each year, tens of thousands of families across the U.S. are devastated by the death of their baby.

However, the grief of these families are very rarely acknowledged or spoken about.

Meet Shayla Marr and Telia Thompson. They are mothers who have felt the excitement of pregnancy, only to be utterly devastated by the loss of a child. These are their stories. 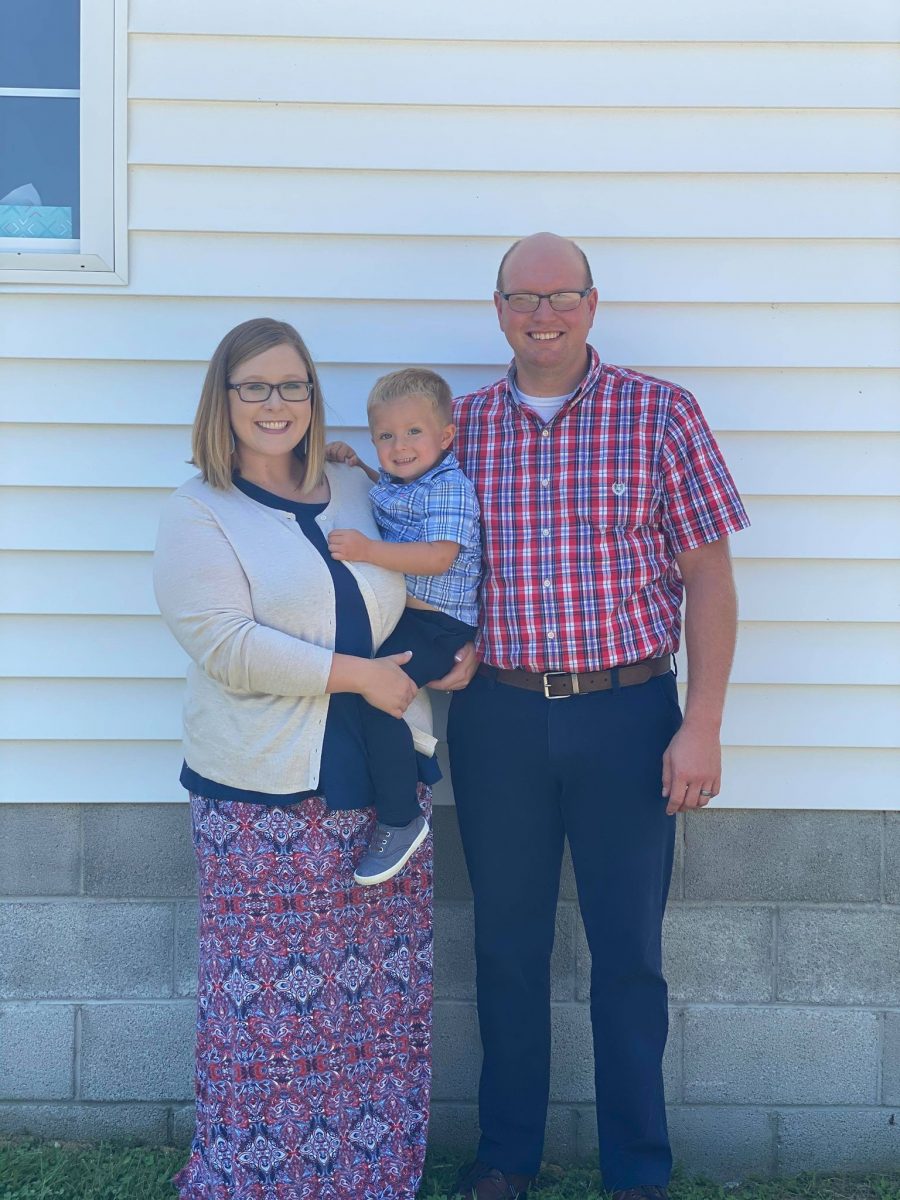 Shayla and her husband, Ethan Marr, tried for three and a half years to have a baby. So, when she first became pregnant, it seemed too good to be true.

“We were nervous and excited,” Shayla said. “…There were no medical concerns initially. However, my pregnancy was very closely monitored due to infertility concerns. We were going to an infertility clinic in Louisville at the time, and they monitored everything very closely.”

According to the American Pregnancy Association website, human chorionic gonadotropin (hCG) is a hormone normally produced by the placenta. If a woman is pregnant, it can be detected in her urine.

Blood tests measuring hCG levels can also be used to check how well a pregnancy is progressing, including a baby’s development. Low hCG levels may represent a very early pregnancy or a pregnancy that is ending in miscarriage.

“I was very early in my pregnancy when I had a miscarriage,” Shayla said. “I was only six weeks along. Due to being monitored at the infertility clinic, they kept a close eye on my hCG levels. My hCG levels started to drop, and they gave me the devastating news that I would miscarry my baby. Within a few days, I started bleeding heavily. I remember being in quite a bit of pain during the process, and I believe my emotional pain made the physical pain seem worse.”

“That moment was the saddest moment of my life,” Shayla said. “After trying to conceive for so long, I thought I would never be able to have a child. Then, once we finally did get pregnant, it felt like our dreams got ripped away from us.”

For Shayla, the loss affected her more than just physically.

“During my time of loss, I was not mentally okay,” Shayla said. “I became depressed, and my anxiety increased. Thankfully, I had the support of my family and friends.”

Shayla’s pregnancy ended before her and her husband knew their baby’s gender.

“We didn’t name the baby. We simply referred to it as ‘baby’ or the ‘baby we lost,’” Shayla said. “My sweet sister also had a miscarriage and lost her son. After her loss, she joined a support group on Facebook where members talked about naming their baby even though they didn’t know the gender. My sister mentioned this to me, and my husband and I both agreed that our baby deserved a name. We decided on a gender neutral name, Emerson Lee. Naming our baby helped with grief so much. Our baby mattered. Our baby deserved a name.”

During her second pregnancy, Shayla was terrified.

“We got pregnant again so quickly that I was convinced something would happen to that pregnancy, too,” Shayla said. “My anxiety throughout my whole pregnancy was very high. Once we made it to 20 weeks gestation, that anxiety lessened.” 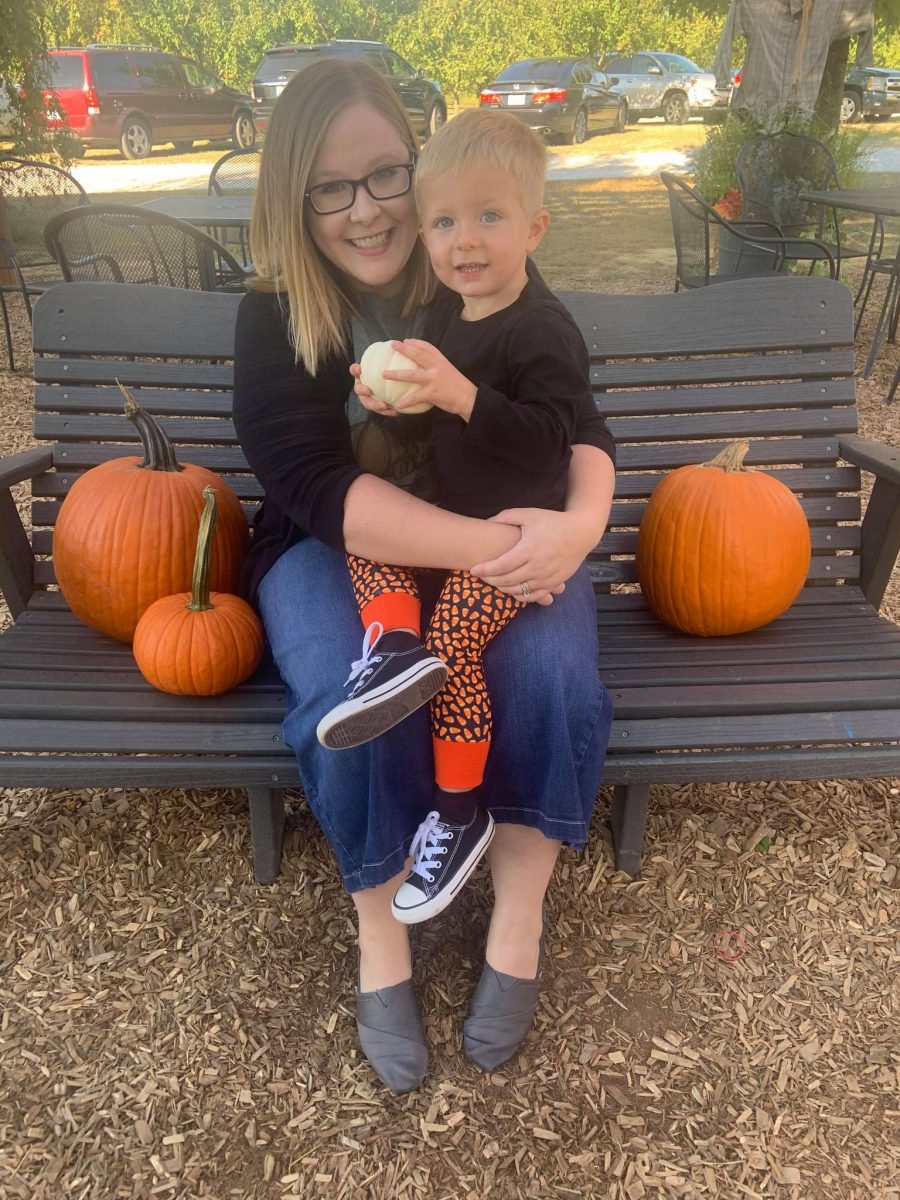 Shayla Marr said she will never forget her first baby, but is beyond grateful for her son, Easton. Photo submitted.

“He is the sunshine of our lives,” Shayla said of her son. “He keeps our hearts and lives full of joy and love. We will never forget our sweet Emerson, but are thankful that we have a child here on Earth with us to enjoy and love.”

As for others who have experienced the loss of a pregnancy and baby, Shayla said it’s important to grieve and heal. It’s also important to not feel ashamed.

“Allow yourself to grieve. Name your baby, even if you didn’t know gender,” Shayla said. “Do not feel guilty for being happy after your loss. Grief and guilt can be crippling. So, grieve and then realize that life does not stop. Take time to grieve and then take time to heal. You will never forget your baby, but it is okay to be happy again.”

“I honestly had no clue how common infant and pregnancy loss is until after I had my miscarriage,” Shayla added. “I think women should not feel ashamed of their losses. It is not their fault or their body’s fault. Sharing our stories allows us to connect with other moms and not have loneliness that is oftentimes associated with loss.”

Telia and Adam Thompson were very excited to find out that they were expecting a baby, but they were also very surprised.

“I was told I may not be able to have children at all due to Polycystic Ovarian Syndrome (PCOS),” Telia said. “And I had gotten pregnant the second month of trying.”

Telia’s pregnancy was difficult. She began having troubling symptoms within the first two weeks, symptoms that became progressively worse every other day.

“It honestly got to the point I thought I had the flu or a stomach bug,” Telia said. “I was miserable, and I started thinking it wasn’t right to be this sick. I kept telling my husband, ‘Something just isn’t right.’ He was extremely concerned, but he was trying to stay positive.”

At seven weeks, Telia had the first ultrasound. The couple was excited to see their baby for the first time, but they were instead met with devastating news.

“We were surprised when the gestational sac was empty,” Telia explained. “We didn’t see a baby at all, just an empty black spot on the screen. They said I may just be earlier in the pregnancy than they thought and needed a blood test to confirm just how far along I was.”

“The next day, we received the call that my blood showed I was nearly eight weeks pregnant,” Telia continued. “So, there should have been a baby shown on the ultrasound. They told me it was a blighted ovum, and that it’s a very common type of miscarriage…The call was devastating for both of us. We cried together for a long time when he (Adam) got home from work and off and on for months.”

According to the Mayo Clinic website, a blighted ovum is also known as an anembryonic pregnancy. It occurs when an early embryo never develops or when it stops developing, is resorbed, and therefore leaves an empty gestational sac.

“They prescribed me medication to begin the miscarriage process, and I ended up going through the process for roughly seven weeks,” Telia said. “Physically, I bled for seven weeks, and it was awful. I had severe cramps all the time. Emotionally and mentally, I was blank. I was in survival mode and just couldn’t feel much of anything for a long time.”

Through this difficult time, Telia and Adam coped with prayer and a huge support group.

“The main thing that got me personally through it was just talking about it with friends or family that had been through miscarriages themselves,” Telia said. “It made me feel less alone and encouraged me to keep going.”

While Telia and Adam will never forget the baby they lost, they now find joy in their daughter, Ashlin, who will soon be eight-months-old.

“When I saw the positive pregnancy test, I didn’t believe it,” Telia said when discovering she was pregnant again. “And honestly, it took me six months to fully believe that I was actually going to have a baby and that I wasn’t going to miscarry her. It was like my brain wouldn’t let me accept that I was pregnant just in case we lost her, too.”

To others who have gone through the heart break of pregnancy and infant loss, Telia said it’s okay to hurt. It’s okay to mourn.

“You are not alone. It’s not your fault, and there are tons of people who have gone through the exact same thing,” Telia said. “It hurts, and that’s okay. You’re not silly for mourning a child you didn’t get to meet. And never give up hope that you will have a healthy pregnancy one day.” 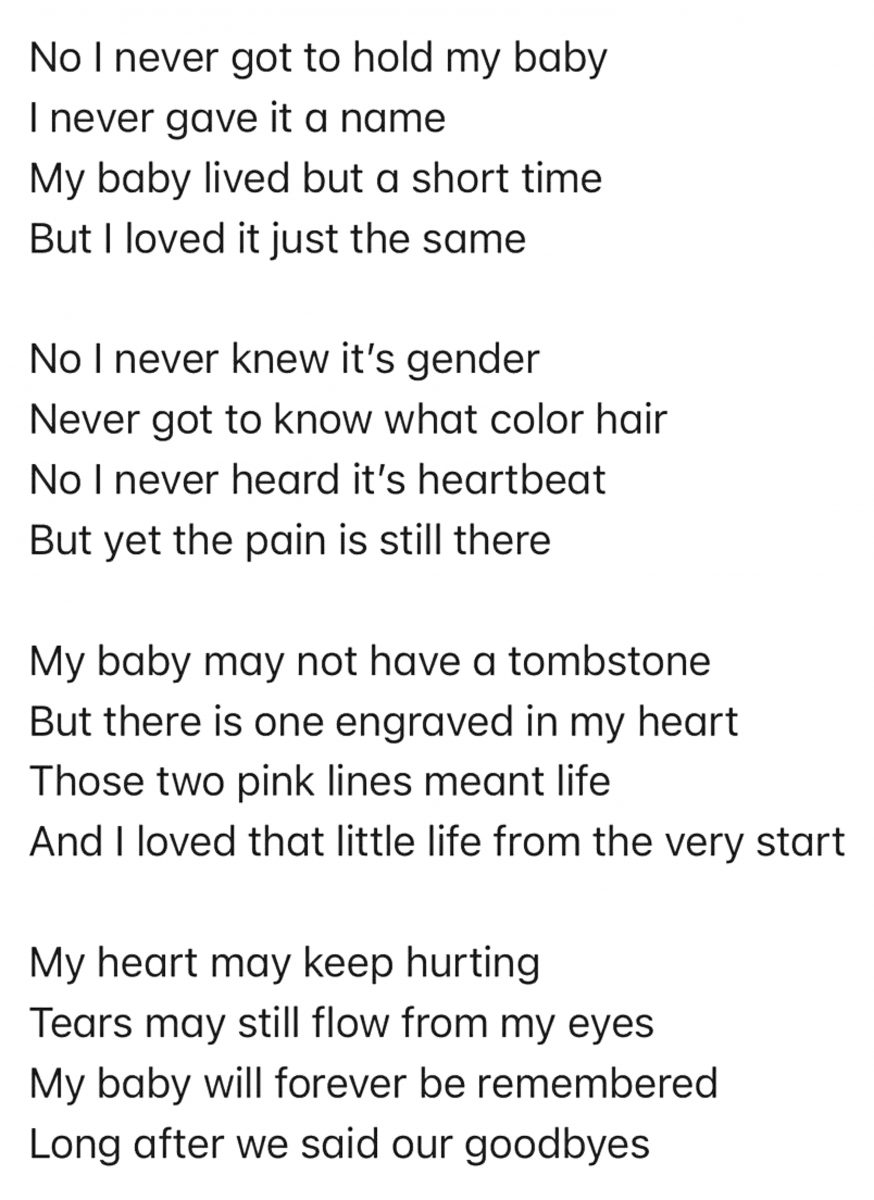 Shayla Marr wrote this poem after losing her first child due to a miscarriage.

For those who have experienced pregnancy and infant loss, the Star Legacy Foundation provides live, interactive, online support groups for families and for individuals. As stated on the organization’s website, groups are held via HIPAA compliant videoconferencing and are facilitated by trained mental health professionals. For more information, visit the Star Legacy Foundation at https://starlegacyfoundation.org.