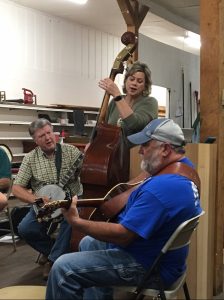 The tradition of gathering to play live music is as old the Kentucky hills.

“Music gives a soul to the universe, wings to the mind, flight to the imagination, and life to everything.”  Plato

Ron Underwood, owner of Southern Wood in Summer Shade, enjoys picking a guitar. Last year, he brought his guitar to work. His friend James Blythe noticed, and invited him to a local gathering where pickers play.

“I thought I played the guitar, until I saw Tommy Thurman play. I don’t play,” Underwood joked.

So impressed by the quality and quantity of local musicians, Ron invited people to his store to play as part of the local initiative to revive Summer Shade.

Through the grapevine, word spread and before long the store was busting at the seams on music night.

“Before COVID hit, we had sometimes thirty pickers a session,” Underwood said.

The group was so big that they move next-door to the former Froedge Store recently purchased and renovated by Cash Fugate, and also formerly owned and operated as Kentucky Arts by picker Tommy Thurman.

The community and the old store building have a history and music.

“I always loved music and I was always around music,” said Tommy Thurman. At one point earlier in life, he took music quite seriously and hoped to gain notoriety with his band mates in the County Road Band.

Although that dream did not come to full fruition, Thurman never lost his luster for playing and singing.

“We’d get together at the store down here and we would practice,” said Tommy.

“People around here would say that they set out on the porch and listen to us playing music. That’s Summer Shade for you.”

Tommy’s son Todd also took a liking to music and is one of the regular pickers at the by monthly gathering.

Although Tommy’s musical talent undoubtedly had an impact on Todd he says that he never really thought about it. He was 16 years old before he started taking his musical talent seriously. Picking in the Shade, as the gathering has been deemed, provided an outlet for his talent.

“I really enjoy the fellowship of it,” said Todd.

The regular pickers, male and female alike, who attend have a diverse range of skills, instruments, and backgrounds.

The group is also a wonderful demonstration of how the love of music has no age. The oldest attendant is 100-year-old Iris Bartley, who will turn 101 this December.

“Aunt Iris plays the mandolin, and the guitar, and an auto harp. She can keep up with anyone here, and she plays for hours,” said Dawson, whose family boasts numerous musicians.

Eddie Walker is another such musician who attends the group on a regular basis, who comes from a long line of musical talent.

During the days of traveling road shows, Walker’s grandparents and great-grandparents toured the state and region.

His father Ivan, along with his grandparents, played a local radio show until the mid 60s, when live music trends gave way to other pastimes.

“I can still remember, when we would go to sleep at night, daddy would go out and practice his fiddle. And he would walk in circles around the house while he practiced for hours,” Walker said.

Although he was continuously around music, local musician Noah Cross began teaching himself the guitar at the age of 10, he was about 13 years old before he really took to the guitar.

“Me and my cousin Dale started singing those Merle Haggard songs,” Walker recollected. Through the years he’s added to his repertoire, and now plays the fiddle and mandolin as well.

Another musician in the group who has the ability to play many different stringed instruments is Wayne Blythe, who hails from Turkey Neck Bend in Cumberland County. Blythe has a deep musical roots as well.

His mother and father played and sang gospel music all of his life, around the age of 12 he began playing the bass. At 25, he took up the banjo, and then his late 30s he took up the mandolin.

“When I picked up the mandolin I just picked it up and played it. It was a God given talent, and I owe him all of the honor and glory,” Blythe said.

Although the pandemic has impacted the size of the group a bit, it certainly hasn’t kept the players from playing every other Friday evening.

As an added bonus, Underwood now live streams the events on the Summer Shade Town Hall Facebook page, so that everyone can enjoy the music. Picking in the Shade had gathered many followers who like listening to the old-time tunes and rhythms.

The music is a collection of old country, gospel, and Bluegrass. On occasion, the group even takes special requests via Facebook.

The group agrees it is a fun, positive, and a hopeful way to spend a Friday evening.

“Many peoples’ Friday evenings are brightened by the broadcast.  This is us, our history, our way of life, and of course it’s entertaining,” said Underwood.

“In the comments I read is a lot of ‘we used to’ and ‘this makes me homesick’. The fact that it is live from Summer Shade adds some hope that we can continue the good traditions and survive.  We are all hoping that one day we can have a big live audience and celebrate.” 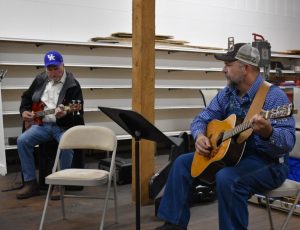 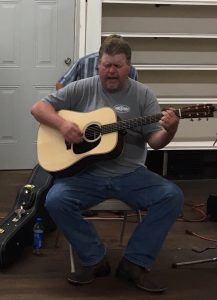 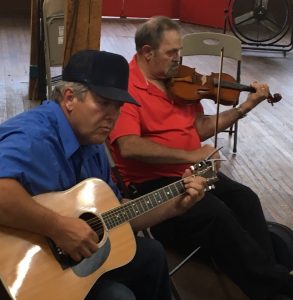 Eddie Walker on the fiddle, Rusty Brown on the guitar. 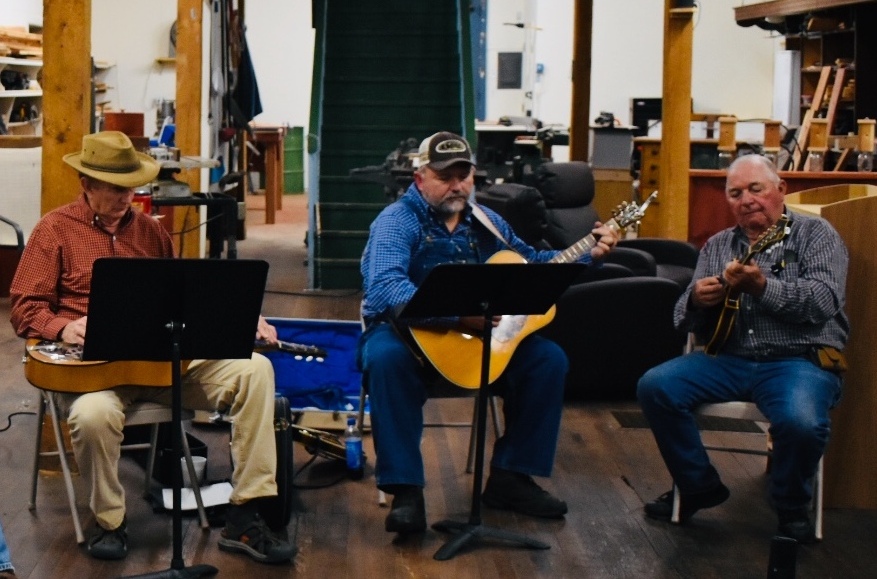