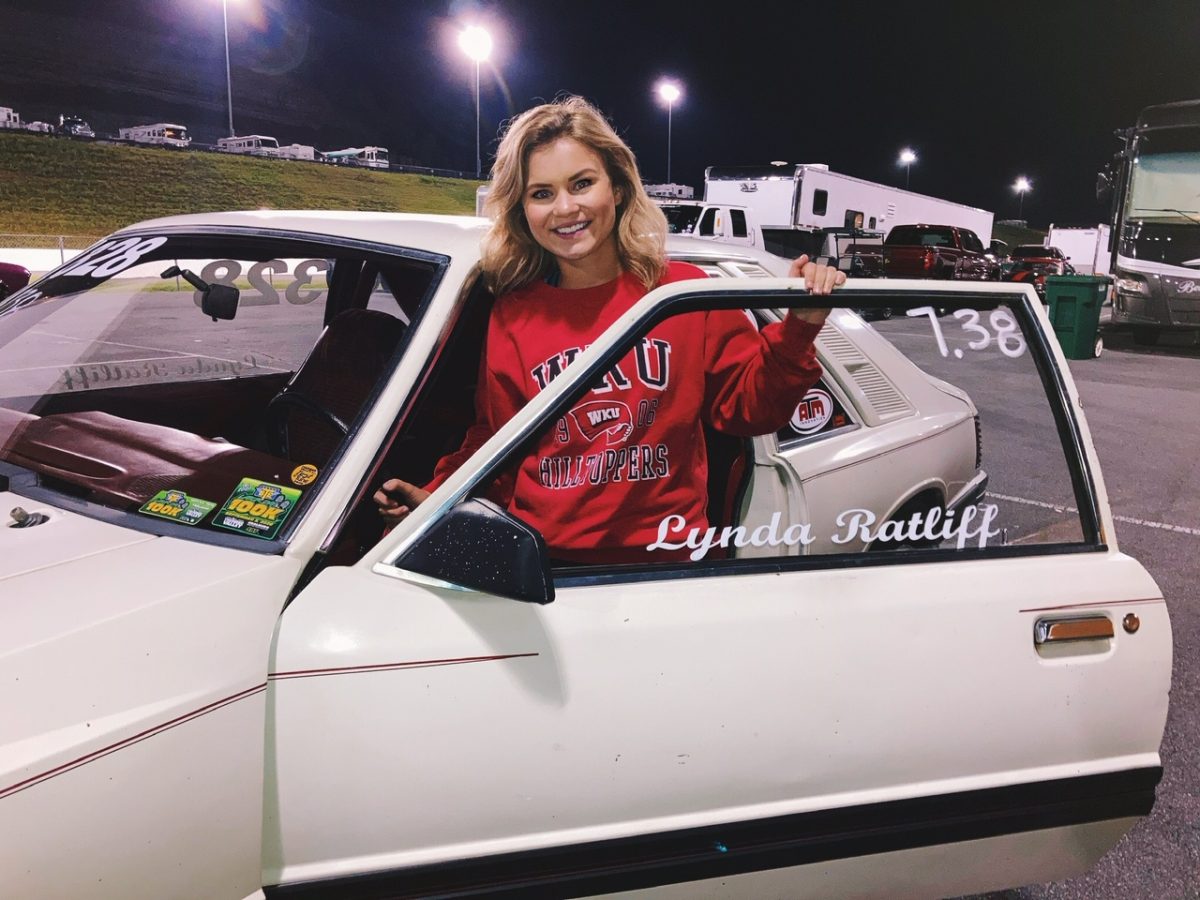 Behind the Wheel
By Mary Beth Sallee

There’s no doubt that racing is considered a male dominated sport.

But for young female racers like Lynda Ratliff, gender means nothing once you’re behind the wheel.

“There will always be men that are prideful and do not like competing with, or especially getting beat by, a young female driver,” Ratliff said. “But I think the majority of drivers are very respectful and view me as any competitor. You just have to accept that not everyone is going to be your biggest fan and then not care that they aren’t.”

A Munfordville native, as a young girl Ratliff spent many days at the racetrack.

The young racer described her first time behind the wheel as nerve-racking.

“I messed up a lot at first, but once I got through that I just kept wanting to do it again and again,” Ratliff said. “It’s an adrenaline rush. While it doesn’t seem like it when you watch a pass, when you’re in the driver’s seat everything happens so fast.”

Ratliff competes in what is called bracket racing.

“It’s more complex than the fastest car wins, which is what a lot of people think when they hear drag racing,” Ratliff explained. “Provided that there are requirements and limits depending on what class you run, your car does not have to be fast, but it does have to be consistent. Before you make a pass, you have to write your dial-in on the window of your car. This is the time that you think your car will run. The trick is that you can’t go faster than your dial-in because that is called a breakout and you lose. So, the key is to run as close to your dial-in without running under it. For example, if my dial-in is a 7.25 (seconds) and I run 7.24 I would breakout. This is why you need your car to be consistent.”

“Then there is also your reaction time which is how quickly you react leaving the starting line,” Ratliff added. “This is extremely competitive. 0.000 (seconds) is a perfect light and anything under that would be a red light, which would disqualify you (your opponent would automatically win). As a footbrake racer, I aim for a reaction time below 0.030 (3 hundredths of a second). Your reaction time added to how much you run off your dial is your package. You race one opponent at a time and whoever has the better package, provided there was no breakout or red light, wins and moves on the next round. So, you have to win multiple rounds in order to actually win the race.”

Prior to race day, however, Ratliff said there is much preparation that takes place.

Ratliff’s racing has allowed her to travel throughout the U.S., from Indianapolis to Gainesville, Fla., and several places in between. Racing has not only brought fourth the opportunity to travel, but also several great accomplishments. 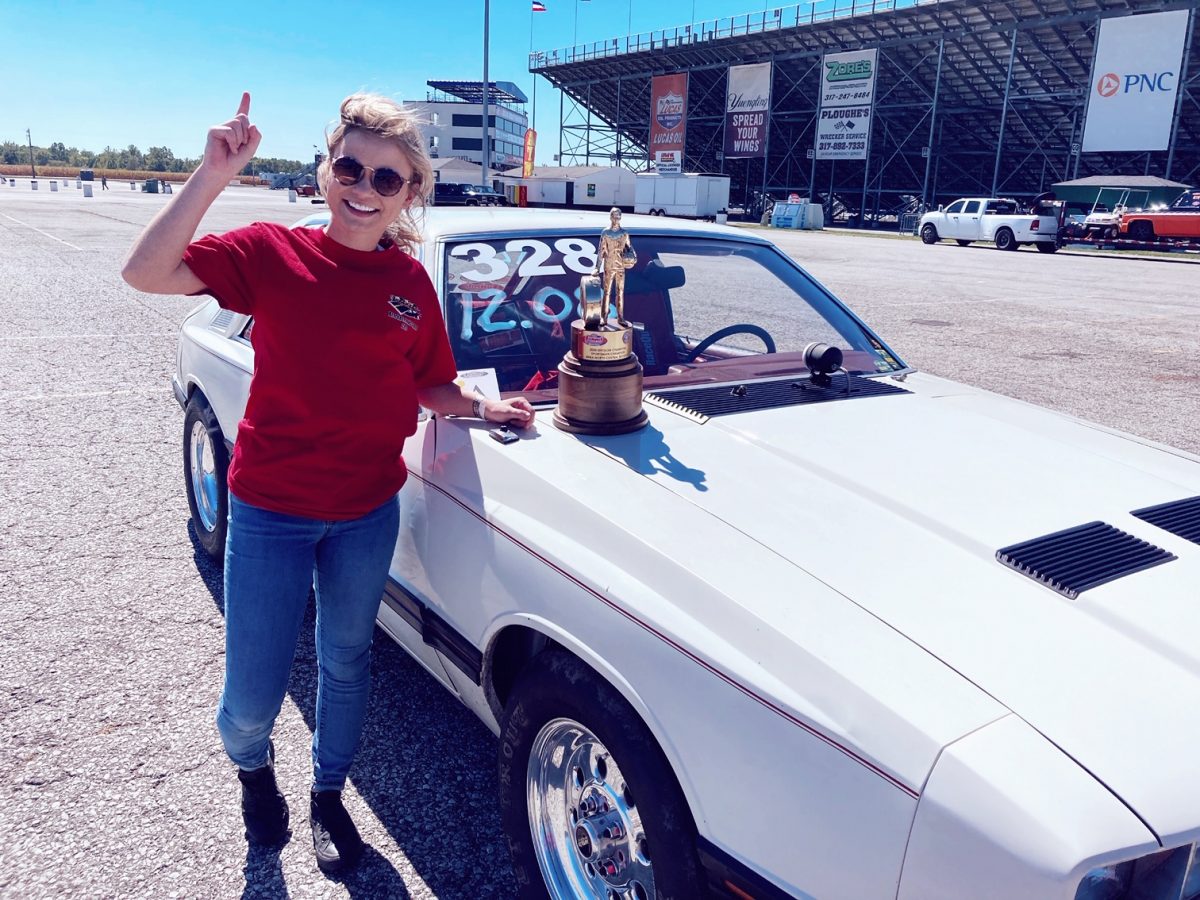 “I’ve competed in NHRA Division III Bracket Finals for five years now representing Beech Bend Raceway Park, and this year I won the Division III Sportsman Championship,” Ratliff said. “This win allows me to compete in the world finals in Vegas at the end of October. Aside from this, I just brought home my fourth win of the season. Even though we had to take a long time off for COVID, this year of racing has been the most successful one yet.”

Ratliff said that she is most proud of the progress she has made as a driver over the last five years. But she said she wouldn’t be where she is today if it wasn’t from the one person who laid the track for her racing career.

“While there are so many people that help us out, my Dad is the reason I am where I am,” Ratliff said. “If it wasn’t for him, I never would have started racing. He’s always thinking of what can be done to make the car better. While I am the driver, the win lights wouldn’t come on without him.”

While she loves racing, it’s not the only aspect of Ratliff’s life. Education is also important as well. She has earned a Bachelor of Science in International Business and is currently finishing a Master of Business Administration.

Ratliff stated that she isn’t sure where racing may lead her in the future.

“I’ve really been taking it race by race, but I would like to go more professional,” Ratliff said. “And I’m open to any opportunity that presents itself.”

As for other women or young girls interested in racing, the advice is simple.

“Jump in and drive!” Ratliff said. “Getting started is the hardest part. So, you just have to go for it!”