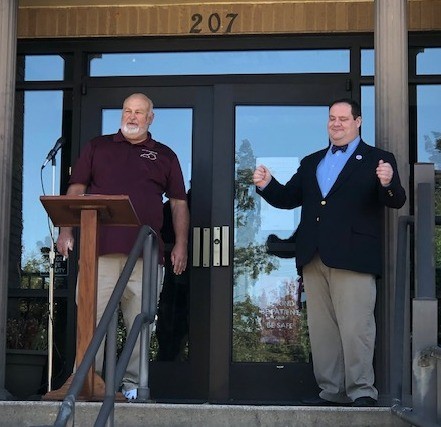 The ceremonies were opened by Barn Lot Theater’s board Chairman Larry Wilson followed by Mayor Smith who proclaimed that the City of Edmonton stands in support of all arts and Humanities institutions including our very own Barn Lot Theater. He noted that Arts and Humanities in Kentucky represent 2.5 % of the state’s gross domestic product and contributes $4.9 billion to Kentucky’s economy. It also provides 52,978 jobs.

Executive Director Hadley was excited to make the long-awaited announcement that the theater would finally be opening back up from its pandemic closure. The first show will be held at the theater’s original location on the stage in Bowling Park with the Carol Burnett Show Skits on October 23, 24, and 25th.

The second show, which is the most popular of their history, is Steel Magnolias. The dates are December 4, 5, and 6 at the Metcalfe County Middle School auditorium.