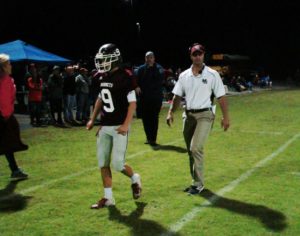 The Metcalfe County Hornet 2A football team was coming off a big 23-21 victory over Adair County at home when they headed to Edmonson County for their first district game last Friday night. The two teams have tangled in games going down to the wire the last several years with two of the four games dating back to 2016 going into overtime.

Last Friday, the Wildcats did not need overtime to get the 23-21 victory, but they did need a 39-yard field goal from Clay Walden in the final four minutes of the game to edge the Hornets. MCHS had taken 21-14 lead earlier in the fourth quarter.

ECHS coach, Nathan Smith, had an opportunity to tie the score at 21 and use the strong leg of Walden too kick the PAT, but elected instead to go for the 2-point conversion. MCHS had excellent pass coverage and came up with a big defensive stop to preserve temporarily a Hornet 21-20 lead. There was still plenty of time on the game clock, for one or both teams, to drive and score for the win.

The Wildcats stopped the Hornets on their next possession after Walden’s kick-off pinned Metcalfe deep in their own territory. Facing fourth down, this time Smith elected to let Walden kick the field goal. Walden had the distance and a few extra yards “to boot,” (pun intended).

ECHS took the lead at 23-21 and their defense held on for the big district win.

The Hornets and Wildcats both had success on offense and defense n the game with both teams having big plays by big-time players.

The Wildcats scored first on a 15-yard run by Matt Shaw. Walden booted the PAT for an ECS 7-0 lead.

Gabe Zurmehly smashed his way for three rushes early in the game for 35 yards and scored the first Hornet touchdown, but the PAT kick missed, and Edmonson led Metcalfe 7-6.

QB Peyton Dial hit Wyatt Blythe in the corner of the end zone to give the Hornets a 12-7 lead. Blythe would also catch the 2-point conversion pass from Dial giving Metcalfe a 14-7 lead.

Shaw rushed for his second TD and Walden’s PAT kick split the uprights for a 14-14 tie, the score at halftime.

Metcalfe almost gave Edmonson the lead before intermission. An interception gave the Wildcats the football on the 32-yardline with 48 seconds remaining. A bad snap from the shotgun, a problem that plagued the Wildcats throughout the game, forced ECHS to attempt a 25-yard field goal with one second on the clock but this time, Walden missed to preserve the 14-14 score.

The last four years the margin of victory has been 2, 7, 1, and 9 points with the Hornets winning three of four of those games.

In 2020, the 2-point margin of victory was just another in the continuing list of close games but the “W,” goes in the Wildcat column to start the season but two familiar foes could face each other again in post-season action.

When and wherever the Hornets and Wildcats meet on the gridiron, one thing is certain—the score will be close and the game more than worth the price of admission.

Complete stats from the Hornets win over the Indians: The Hornets rushed for 180 yards against Adair with Gabe Zurmehly toting the mail. He had 17 carries for 85 yards and 2 touchdowns. QB Peyton Dial had 7 carries for 56 yards. Devan Alderson rushed 10 times for 39 yards.

Dial was 9 of 19 for 148 yards passing with one TD. Wyatt Blythe had 6 catches for 114 yards and one TD. Edmunds Sawyer caught 2 passes for 15 yards and Rudy Wisdom had one catch for 15 yards.

Dakota Shaw kicked two PAT’s and Dial scored on a 2-point conversion attempt for the 22-19 final.