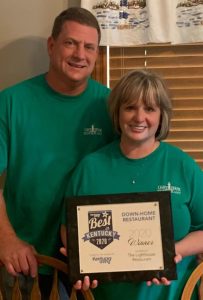 One of Metcalfe’s most treasured eateries, the Lighthouse Restaurant in the hamlet of Sulphur Well, draws customers from across the state and country.  It also seems to have a magnetic attraction when it comes to winning awards for its delicious, one of a kind down-home, family style menu.

Last week, the Lighthouse added an award to its long list of accolades, being named 1st place in “Best Down Home Restaurant “in the state of Kentucky, by Kentucky Living Magazine.

“I will say it’s very humbling,” said Tammy Deckard, owner of the Lighthouse Restaurant. On any weekend you can find Tammy, her husband Rodney, their daughters, and dedicated staff making food from scratch and operating the register.

“We feel very thankful and blessed by God. We had so many calls at the restaurant yesterday congratulating us from people we didn’t even know. This award just means more to us than some, because it’s voted on by Kentuckians across the state. We won last year, so we weren’t really expecting first place again.”

In 2018, the Lighthouse won 2nd place, making this the 3rd year in a row the country favorite has won.

Like all family owned businesses, the established restaurant has had its share of struggled during the pandemic, but they are weathering the storm.

“We’re hanging in there, doing the best we can. When this all first started, we closed down inside dining and did only carry out, and curbside. We actually had a lot of support. We were very busy with carry out, but we had a short staff, which made it hard to keep up,” Deckard said.

“When we were allowed to have 25% capacity, that was tough…we were torn about opening back up, but we did, and just tried to make the best of it.  We still had the same expenses, electric bill, insurance, taxes, and food cost. It has been hard, but we’re back up to 50 % occupancy, and still are doing a lot of carry out orders.”

However, having been in the business so long the family has learned to roll with the punches and find creative solutions.

“Something new that we’re doing, and it’s working wonderfully, we’re taking reservations now. We’re doing that to control people population on our porch and hanging out inside to be seated,” she said. “It has helped tremendously!”

Deckard added that it has also cut some customer wait time, making it a win win situation.

Speaking of customers Deckard readily acknowledged that it is the customs who have made their recipe for success.

“We want to thank everyone that’s supported us through these crazy times,” she said.