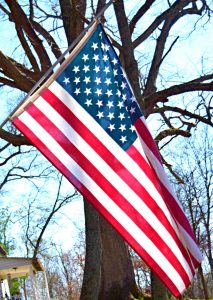 It is the responsibility of every Kentuckian to vote in this year’s upcoming election on November 3. Photo by Mary Beth Sallee.

A bipartisan agreement was reached between Democratic Governor Andy Beshear and Republican Secretary of State Michael Adams regarding the upcoming November General Election.

During his press conference on August 14, Governor Beshear explained that the agreement would allow Kentuckians to exercise their right to vote, as well as protect their health during the COVID-19 pandemic.

“Secretary Adams and I were able to put partisanship aside and develop a plan for the General Election that puts the health and safety of Kentuckians first,” Beshear said. “This plan provides more time and options to vote in this General Election than ever before.”

Adams was also in attendance during the press conference last Friday and also stressed the importance of coming to an agreement despite party lines.

“Governor Beshear and I worked together across the partisan divide to fashion election rules that are fair to every voter regardless of party,” Adams said. “We kept the best of what worked in the June primary, especially giving voters options to safely cast their votes, and we built on that record with improvements: more in-person voting locations and faster election results.”

According to Governor Beshear, there are many more voting options available in Kentucky than in years prior.

In previous election years, state law only allowed for absentee ballots based upon disability, age, or illness. However, absentee voting is expanded for the upcoming election, allowing for pandemic concerns.

“Any voter of any age or health condition that believes he or she is at risk from COVID-19 can vote absentee,” Secretary Adams said.

The bipartisan agreement between the Governor and the Secretary of State also addressed early voting. The plan states that every workday and Saturday beginning October 13 through Election Day, each county clerk will designate a safe place to open for a minimum of four hours for voters to cast their ballots.

“For those that want to vote in person, it makes it safer,” Beshear said. “You can pick your time. We can significantly decrease the density.”

According to the election plan, each county will also have one voting “super-center” where anyone can vote on November 3 regardless of his or her precinct.

Below are the full details of the bipartisan election plan as stated per the Governor’s website:

In the coming weeks, Governor Beshear, Secretary Adams, the State Board of Elections, and local election officials will all work together to educate Kentuckians on the election plan.

For more information regarding the state’s response to COVID-19 visit www.kycovid19.ky.gov.