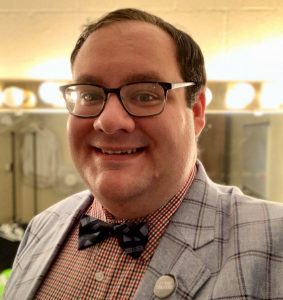 Edmonton’s beloved Barn Lot Theater has announced Kyle Hadley as its new Executive Director. And although these are challenging times, Hadley is optimistic and excited for the theater’s future.

“It’s an uncertain but exciting time,” Hadley said. “I’m ready for the challenge.”

The announcement came after Shane Chambers, Executive Director of 21 years, stepped down. Chambers is staying on with the theater as the Director of Special Projects, which will include the new auction barn.

Board President Larry Wilson said in a press release issued last week that Shane’s decision came as a surprise to the board.

“We feel her recommendation for Kyle (Hadley) was a supreme choice,” said Wilson.

Although Kyle will be new to the role of Executive Director, he is not a new face around Barn Lot Theater.

Hadley first had the Barn Lot Theater experience back in 2008 when put “Jesus Christ Superstar” and “Little Shop of Horrors” on stage.

“I saw both productions two or three times, it was so good. There was something very special, very unique about the theater. It’s hard to put your finger on, but it’s likely the wealth of talent here,” he said.

Hadley admits the small, unassuming building, and unlikely location of the theater had him fooled when he first visited. Once inside, the rich, intimate experience the theater offers to a small crowd of 125 or less was overwhelming for Hadley.

“It wasn’t what I expected on the outside, but any apprehension I had melted away once I saw what they offer. I was completely blown away,” he said.

Not long afterward, a good friend of his encouraged him to apply for the job of assistant technical director when the position came open.

“I had a degree in education, not theater, so I didn’t think I’d get the job,” Hadley said. Although Hadley did not have a degree in theater, he had experience working with community theater in other communities.

They called him in for an interview and he landed the job. That was in 2012. He later he took on the role of promoter for Barn Lot, taking photos and arranging advertising, and in 2015 he transitioned into the office.

“Shane has been a mentor to me, and has been training me,” he said.

In the press release, Chambers commented that aside from her children she can think of nothing she is more proud of than her time as Executive Director of the Barn Lot Theater.

In recent years the community theater has grown to a more regional level, drawing people from surrounding counties. Hadley wants to bank on that trend and keep the theater moving forward.

“I want to push the growth,” said Hadley.

Although the theater can’t hold productions at this time, Hadley feels it is an ideal time for the transition, offering him ample time to get used to his new role before launching into a production.

Nothing is yet written in stone, but the entire crew hopes to return to in-house productions next spring.

There’s also talk of the potential of an outdoor play this fall if circumstances allow.

Hadley knows there are challenges, but he also knows the potential is endless and will make every effort to market the theater to more people.

“We don’t want to be the best-kept secret in Kentucky. We want everyone to know what we have to offer,” Hadley said.

“I’m so looking forward to reaching my creative potential, bring my ideas to the table, not changing things but keeping the momentum going.”