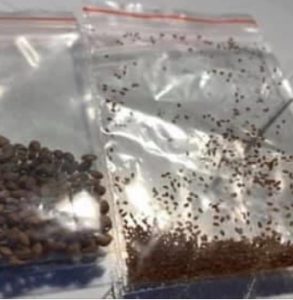 Pictured, a variety of seeds which have all been received as unsolicited packages from China.

If you open your mailbox and find a package you did not order, beware.

Kentuckians, along with residents in all 50 states, have reported unsolicited “gifts” postmarked China. Some of the packages contain seeds, others do not appear to and instead, contain costume jewelry.

Whitney Houchens of Metcalfe County was one such recipient, who got some seeds in the mail.

“I just randomly got this little package in the mail with the unknown label on it, I opened it. And it was these little seeds. I didn’t order them. I looked up all my ordered from the past 4 months so I put them back in my package,” said Houchens. She doesn’t yet know what the seeds are but has contacted the Kentucky Department of Agriculture.

Like many people weathering a strange year and a pandemic, Cassie Eaton of Glasgow was been using online ordering as her primary method of shopping.

“We order pretty much everything online,” said Eaton.

It was a bracelet. Her husband confirmed he had not ordered any such.

“On one side of the package, it had a description of the contents. I googled it and several links came up where people were asking why they received this when the didn’t order it. Most of the dates from those were last fall/winter. I then placed it back inside the box and back in the mailer it came in, and put the whole thing in a ziplock bag.”

Although no seeds were visible she is contacting the Kentucky Department of Agriculture for further instruction.

“Some of the packages are labeled as jewelry because that can make it through customs. One package was labeled as bamboo. Some of the invasive seeds such as amaranth are so tiny, almost microscopic, and they could easily be mixed in without being noticed,” said Metcalfe County extension agent, Brandon Bell. 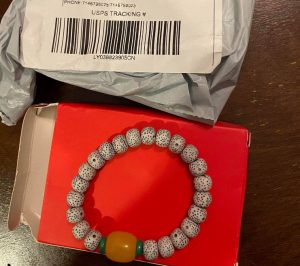 Costume jewelry like this bracelet received by the Eaton household can sometimes disguise seeds in the packing materials. 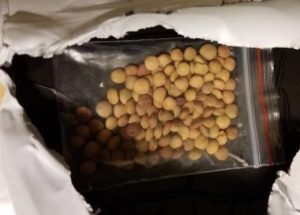 Even throwing away, destroying, or flushing these packets or seeds down the toilet could prove a threat.

“The purpose of these seed shipments is unclear at this time, but we need to get the message out that it’s important that people not plant them,” said Ric Bessin, extension entomologist in the University of Kentucky.

“At this point in time, we don’t have enough information to know if this is a hoax, a prank, an internet scam, or an act of agricultural bio-terrorism,” Kentucky Agriculture Commissioner Ryan Quarles said in a press release last week.

“Seal them tightly and send them to the U.S. Department of Agriculture’s office in Northern Kentucky,” said Bessin.

The U.S. Department of Agriculture has now identified 14 different kinds of seeds so far. There are many more still unidentified.

Those identified include flowering plants like morning glory, hibiscus, and roses, according to the Plant Protection program of USDA’s Animal and Plant Health Inspection Service.

Other packages contain vegetables like cabbage and herbs including mint, sage, rosemary, and lavender.

Some of the packets contain amaranth seeds, a highly invasive species of hogweed that is resistant to herbicides, which attack soybean crops.

The advice is simple: do not plant the seeds.

“Instead, seal them tightly and send them to the U.S. Department of Agriculture’s office in Northern Kentucky,” said Bessin.

You may also contact your county’s Ag Agent and they can provide a form.

At this time, there is no clear evidence of it being bio-terrorism, however, time will tell.

At this juncture, the arrival of the seeds is being treated as a ‘brushing scam’ where people receive unsolicited items from a seller who then posts false customer reviews to boost sales.

If it is an intentional act of bio-terrorism, the potential for destruction is far reaching if disease or invasive species attack America’s croplands.

Individuals who have received the suspicious packages should put them in an airtight bag and ship them and the packaging in which they arrived to the USDA APHIS division of Plant Protection Quarantine at USDA-APHIS PPQ, P.O. Box 475, Hebron, Kentucky 41048. Include this form:

People can contact the Kentucky Department of Agriculture at 502-573-0282 or email ag.web@ky.gov.