A former Barren County Middle School teacher has been arrested again after he purportedly had sex with a minor.

William Kyle Gardner, 28, was arrested last October after the Barren County Sheriff’s Office determined he had sexual intercourse with a student.

He was arrested on the latest charges on Tuesday, July 28, 2020 at the Horse Cave Motel.

Officers went to the motel and reviewed video footage and saw him leaving the motel around 1:00 am before returning later with the juvenile victim. They then entered the room he had rented and stayed around one hour. They then returned to the area of the victim’s residence.

The victim told authorities she and Gardner had sex while at the motel. She also stated that she had been picked up by him in another county three other times.

The victim said she and Gardner began communicating after his release from jail in April. He had discussed the other case with her and told her not to testify against him.

He also sent her nude photos during that time.

Gardner was arrested for unlawful transaction with a minor, 1st degree, illegal sex act victim under 16 years of age; intimidating a participate in the legal process and prohibited use of electronic communication system to procure minor/peace officer re: sex offenses. 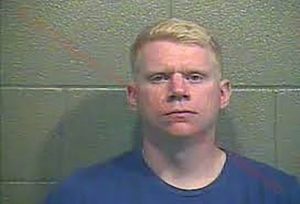