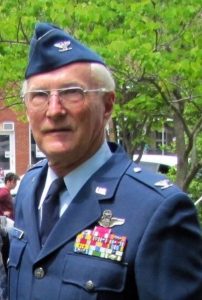 Flying airplanes over hostile territories, providing nuclear execution options to the President of the United States, commanding squadrons, and monitoring North Korea to provide war plans are phrases fitting for a Hollywood movie script, but it’s no movie. It is the real-life biography of Metcalfe County resident Col. William (Bill) Lytle, Jr.

After living through enough adventures for ten men, Lytle retired to Kentucky in 1998 with his wife Myra. Now, after more than two decades of community involvement, Lytle is being honored as one of only twenty inductees into the 2020 Kentucky Veterans Hall of Fame.

Col. Lytle is a member of American Legion post 65, along with many other organizations. Fellow post member and veteran Bill Lagermann and his wife, Chris felt that Bill was a perfect candidate.

“They don’t look for people with just an outstanding military career, which he (Col. Lytle) certainly has, but they look for people who have remained involved in their community,” said Lagermann.

Col. Lytle’s nomination was readily accepted for this prestigious honor.

“We are honored as a post,” said Lagermann . “Colonel Lytle is the only person from post 65 ever accepted in the Kentucky Veterans’ Hall of Fame.”

“You will not find many people with the experience he has,” said Chris Lagermann.

Furthermore, Lytle is the only resident of Metcalfe County ever accepted.

Although most worthy of the honor, Lytle has accepted it with with humility.

“I thank them very much for thinking of me, and I was surprised of course. There are many who should probably be there before me,” Lytle said.

Colonel William Lytle, Jr. begin his military career when he enlisted in the US Air Force in 1959, as a pilot aviation cadet at the age of 19. He was commissioned as a second lieutenant with pilot wings in 1960, and flew KC/EC-135s.

From 1960 until 1970, he flew over 850 combat hours in south eastern Asia while on temporary duty at Guam, Okinawa, Taiwan, the Philippines, and Thailand, and in 1973 Lytle was assigned to Korat Royal Thailand airbase where he flew an EB-66 in support of the South East Asia operations.

From 1974 until 1981, Lytle was assigned to the Andrews Air Force Base in Maryland where he provided nuclear execution options to President Carter.

In 1981 Lytle was promoted to Colonel.

From 1984 until 1987, Lytle was assigned to the US European command, as the command and control division chief. He was responsible for supplying capabilities to execute nuclear war orders, the security of nuclear weapons, and maintaining secure communications with strategic/tactical command centers.

During that time, his military career took him throughout Europe, Western Mediterranean, and into north Africa.

From 1987 until 1988, Lytle was assigned to the strategic air command underground command center in Omaha, Nebraska as deputy commander.

Lytle says that it was a life well lived.

“At one time I was in charge of all the nuclear weapons in Europe. I was very fortunate in my career that I was able to make decisions, and that was unusual for a young colonel. In South Korea, I could go pretty much anywhere I wanted to go. I was one of the few people that can say that they rode through the demilitarized zone (DMZ) on the back of a jeep with the United Nations flag.”

“I have three grandkids, and I’m starting to let them know more about what I’ve done in my life. I feel very lucky,” he said.

When his family relocated to Metcalfe County, he set out to be an involved member of the community.

In 2003, he took part in the Metcalfe County leadership course, and from 2004 to 2006, he served as a member of the Board of Directors of the Edmonton Metcalfe Chamber of Commerce.

Within the organization, he has taken office each year and has served as the Vice Commander, Sergeant of Arms, Historian, and Chaplain.

Because he is interested in helping youth, Lytle chairs the annual American legion oratorical contest each year. He also volunteered to assist in the post 65 American Legion post sponsored baseball team, and was instrumental in initiating a junior guard program at the Metcalfe County high school in Edmonton. Local youth learn proper flag etiquette and other military disciplines.

He is the commander of VFW post 6281 and served as a chaplain prior to taking over his commander.  He has been a member of the local VFW for 23 years.

He also served on the Industrial Board and served as a member of the Extension Office Board of Directors.

Lytle completed the University of Kentucky Community and Leadership Program designed to develop local entrepreneurial coaches to support entrepreneurial program, and is a past President of the Military Officers Association of America, for the Cumberland Trace Chapter in Bowling Green.

One of the projects in the forefront of his service with a Cumberland trace chapter was the development of a much-needed Bowling Green/South Central Kentucky-based veterans nursing home. Efforts are ongoing with a projected groundbreaking for 2021.

This list, though lengthy, is incomplete, as the Colonel’s involvement is extensive.

“Bill is willing to help veterans without a lot of fanfare,” said Lagermann.

“He transports one of the elderly members of post 65 to the monthly meeting and provides transportation to another for to doctors’ visits. He’s 80 years old, but it’s still extremely active and can still fit into his Air Force uniform.”

What is the Kentucky Veterans’ Hall of Fame?

The Kentucky veterans Hall of Fame foundation was established in January 2010.

It was founded by H.B. Deatherage, who is himself a Vietnam veteran. As a veteran, he knows all about visions in missions. Many years after returning home from his service to our country his mission was to build a veteran’s memorial in the city of Florence Kentucky. He grew up in Boone County and went to Florence businesses, and garnered the city’s approval to erect a monument on 44 city-owned acres where the new building was planned.

It is said that H.B. had a vision for what he wanted for Kentucky veterans, and with the first induction ceremony for the Kentucky Veterans Hall of Fame, which was held in Frankfurt Kentucky on March 2014, he has now completed the final portion of his vision.

The organization is dedicated to finding and honoring veterans who have continued serving their communities following their military career. 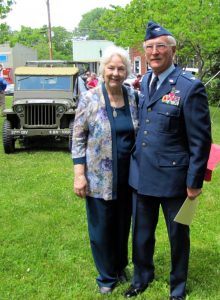