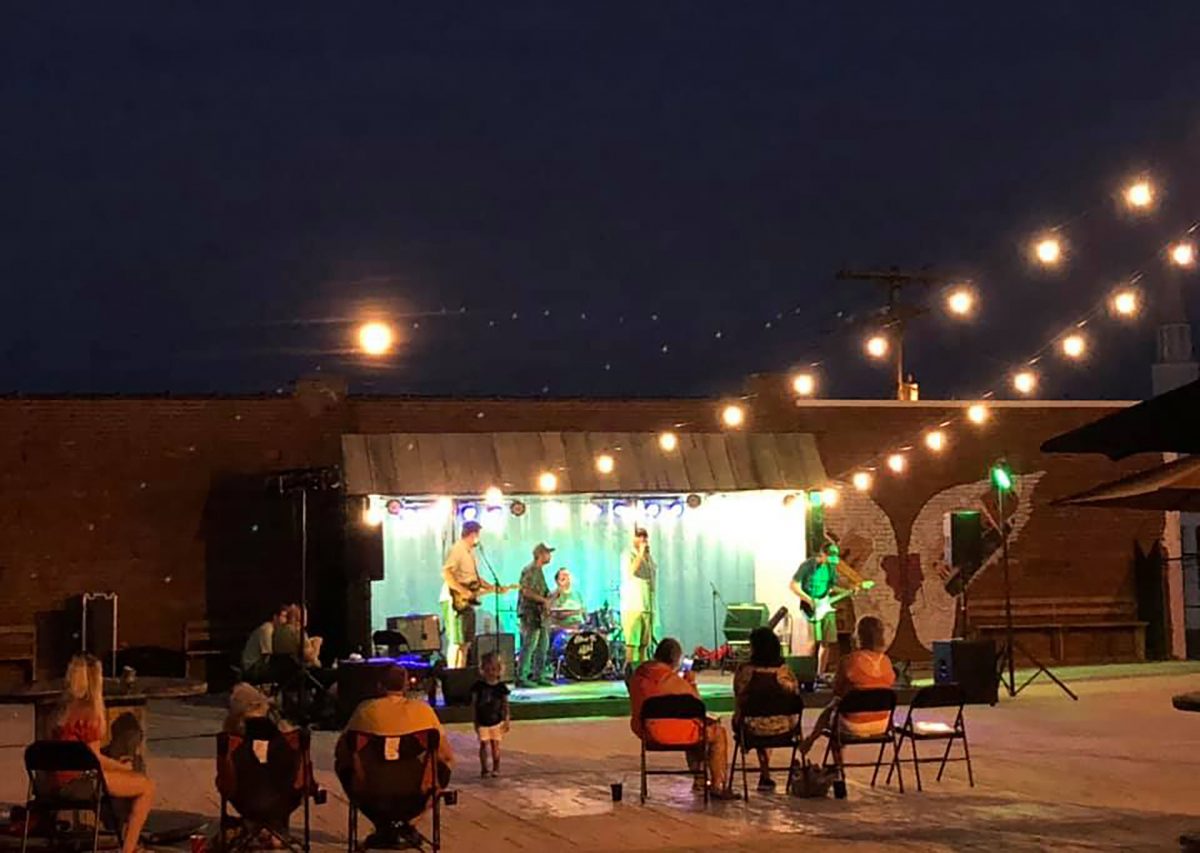 The amphitheater stage located on the backside of the Yancey Square Complex. The stage came to life in July 4, 2020 and continues each Saturday with live music beginning at 8pm. A great place to enjoy live music, great food and cold brews all in a social distancing environment.

Do you know what local band has less hit records than the Beatles, The Rolling Stones and The Who combined, but yet more concerts and gigs in the past 25 years?  If you answered The Unpredictables then you are right-on with happenings in local music.

These crazy horn blowing, drum banging, and guitar thumping rock-n-rollers have been going at it for 16 years.

The band was originally formed by Randy Certain and local chiropractor John Jones.

Randy Certain came from California in ’95 and helped John start the group with his son Grayson on drums in 2005.

Randy has enjoyed playing trumpet in several bands and orchestras but has always enjoyed being in a classic rock “Horn Band” the most.  He considers all of his band mates to be his best friends, and these guys do it because they love it.

John Jones developed his musical talents playing in Southern California in the early 1980s and 90s. Clearly, these fellas are older than most of us but still manage to lug those heavy instrument cases to and from their gigs. So, it’s probably good that they have a chiropractor in the band.

Jones continued playing guitar and bass off and on thru college. But he had to push the weekend gigs, late night practices, and long drives between performances aside for awhile.  He explains this period of his life as the “focus on the day job years”.

Focusing on his day job is exactly what he did. His day job was helping raise three children with his wife Virginia and establishing and building a successful chiropractor practice.

Now that the kids are older and the practice has a good team in place, he is back at having some fun playing music for friends and visitors to our communities.

Clay Terry first picked up a saxophone at the age of twelve because his mom said football was too dangerous. This began his thirty-four year musical career.

Padded by the safety of a non-contact sport, he has played music injury-free for the past fifteen years in Franklin, Bowling Green, Morgantown, and Glasgow.

It was about ten years ago that he joined a band named Skip Bond and the Fugitives where he met Randy Certain, who brought him on board with The Unpredictables. Together, they have made amazing music that grabs the unique sound of the original artist while throwing down a unique sound of their own.

For those ten years, he has played with both a band called Dizzorderly Conduct and The Unpredictables.

David Tuck has been playing guitar for more than four decades and is excited to be a part of The Unpredictables.

Anyone who has heard him play will indeed consider this man a professional, and he has taken this talent to venues of various sizes for three of those four decades.  Whether it’s a small pub, like Yancey’s or the barbecue stage at Rib Lickers, he enjoys entertaining and isn’t timid about taking stage at large arenas in Nashville.

He is excited to get back onstage after a long break for the COVID-19 pandemic.

“This will be a really fun show covering a lot of musical ground which definitely appeals to me as a musician,” Tuck said. “I’m looking forward to rocking out in Glasgow at Yancey’s this Saturday.”

Tuck will be playing for Jeff Bruce, an eight-year member of the band.

Charlie England made the first call to fellow band members to  make this free gig possible for the locally-owned brewery.

“We understand the pressure on our local business community and families seeing entertainment in a manner to stay safe,” England said. “I knew our guys would want to help Yancey’s because we see how they have helped so many new young performers.”

England has sung for The Unpredictables for the last twelve years and enjoys sharing his gift for singing to crowds of all sizes.  He has fronted for bands in Glasgow since the early eighties and is still going strong.

David Foster is a singer, keyboardist, guitarist, fiddler, and songwriter.  He can be found on stage with this band as keyboardist and one of the lead singers.

Foster honed his rock and roll skills over the past thirty years with groups such as Nightfall’s Coming, Wildwood Band, and The Get Down.  He was also the guitarist and singer for the progressive bluegrass band Soulgrass and the Celtic Bluegrass group Barrenhart, both of which were juried members of the Kentucky Arts Council Performing Arts Roster.  Foster has been on the inside stage at Yancey’s with a few of these other bands as well.

When not performing, he is the Executive Director of the American Cave Conservation Association.  David directed the creation and establishment of the American Cave Museum in Horse Cave and helped to restore Hidden River Cave, a cave that had been known as one of the most polluted caves in the world but is now open to the public.

David is also an accomplished songwriter with several novelty songs, including Houdini the Goat, The Massacre of Bowling Green, and The Eclipse Song that have been viewed more than 10,000 times on social media.  His latest public release, We Are One, honors essential workers during the pandemic and has been viewed more than 35,000 times since April 2020.  We Are One also features Doobie Brother’s member John Cowan on bass and vocals.

This week’s performance will have 14-year-old Dale Myers as  an amateur session drummer from Glasgow.

His all-encompassing musical taste makes him a perfect fit for The Unpredictables.  He is also a worship drummer with Crossland Community Church in Glasgow and Bowling Green in both youth and adult worship bands. Myers is sitting in for five-year member Charlie Payne on drums.

Robert Wray, not pictured, has played bass guitar for the last thirty-one years, but you wouldn’t know he had been at it so long.  His high level of energy and love for music and community makes a perfect fit to step in for John Harbart on bass this weekend at the Amphitheater stage at Yancey’s.

The Yancey team is most proud that we have friends like these professionals willing to help us survive and adapt to the mandates of social distancing requirements at this time.

Yancey’s has a campus with more than 30,000 square feet, including everything from darts and pool tables to large open areas perfect for bringing your own group while safely distancing but also enjoying live music, good food, and ice cold brews.

Bands begin every Saturday at 8 p.m. and stay on stage through the evening. Everyone who comes leaves having forgot about the world’s problems for a few hours.

We hope to see you in downtown Glasgow. 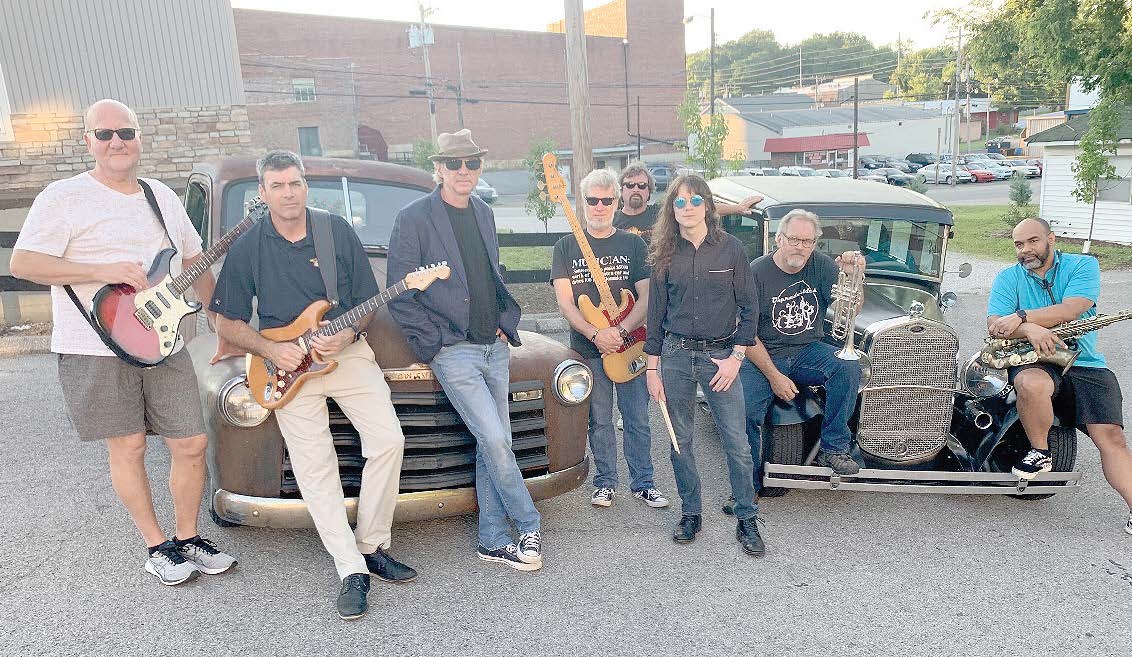 The Unpredictables are celebrating 16 years of providing big band horn sound combined with A funky, rock and roll feel.