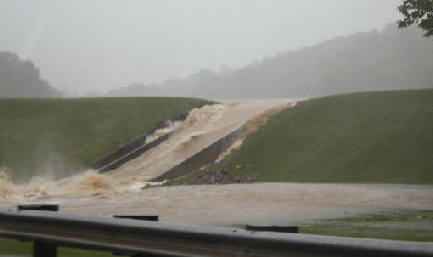 This National Weather Service photo shows the major damage which was done by severe flooding to the Dunham Lake Dam and spillway in May 2010.

The Edmonton City Council held a specially called meeting on July 13th by teleconference in order to adhere to the Governor’s social distancing regulations.

Hensley stated that, “Doug Harrington came down and core drilled all that and found some pretty good cavities under the spillway starting at the top all the way at the bottom.” He then explained the three options for repair presented by the engineers.

Option 1 – Drilling injection ports and inject polyurethane grout under the top flat section of the spillway slab only. The total lump sum cost is $16,500.

Option 3 – Includes all work listed in option #2 plus addresses the voids under the sidewalks on both sides of the spillway which have 2’ to 5’ voids underneath. This option addresses the entire spillway slab and sidewalks. The total lump sum cost is $37,500.

Councilmember Curt Estes asked, “Moe don’t you think it would be better just to do it all?”

Hensley answered, “I really do. I think it would be best.” Mayor Doug Smith and Council members Teresa Hamlett, Faye Word, and Cathy Nunn all voiced their agreement and noted that it would prevent future problems.

It was also mentioned that children have been seen playing at the lake and it is unsafe to do so. City Attorney Sharon Howard was asked to check with the city’s insurance provider about posting signs at the lake to advise of the danger.

Resolution 2020-21-01 CARES Act was approved allowing Mayor Smith to file a Coronavirus Relief Fund (CRF) application with the Department for Local Government (DLG) for reimbursement of expenses to the city during the course of the year.

Hensley also presented an update on the water project noting that he had spoken with the engineers and the state had approved the plans. City Clerk/Administrator Dawn Devore explained that after bids are taken and approved there would be a groundbreaking ceremony.