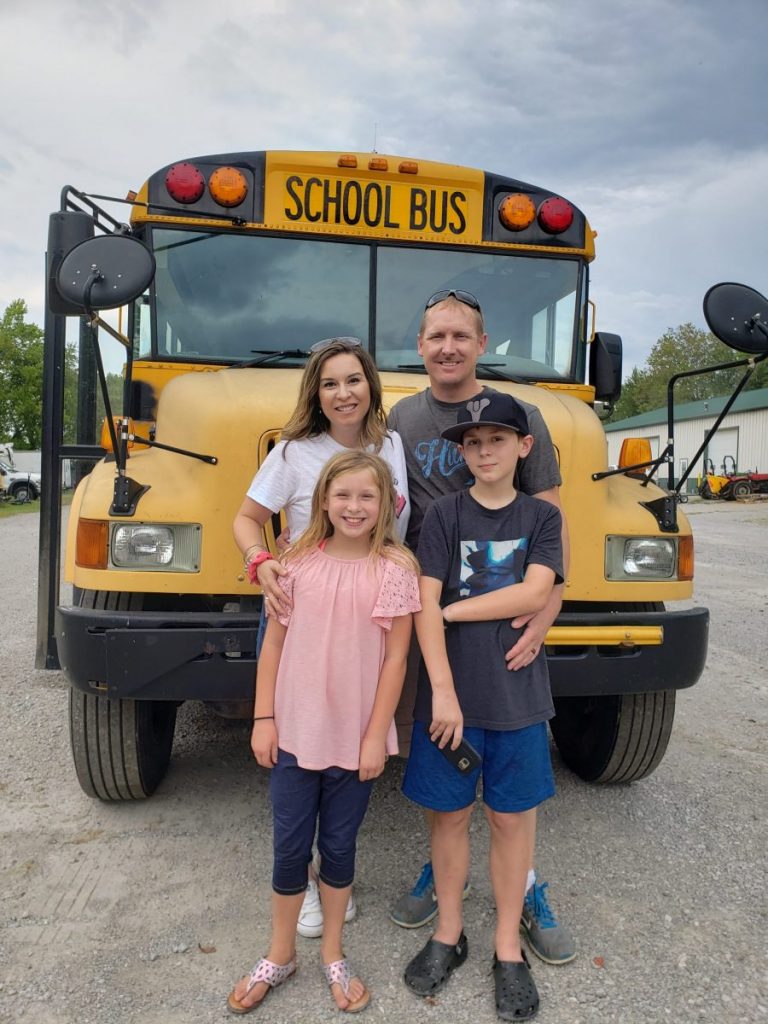 The Cummins family – parents Kevin and Megan, along with Caden and Molly Kate – purchased this school bus in August of last year and spent eight months renovating it into their own personal RV.

Her name is Jolene. And if the lyrics from Dolly Parton’s infamous song is playing in your mind, you’ve hit the nail on the head.

But don’t worry. She isn’t trying to take your man.

Jolene is the name of a skoolie owned by Megan (Ladd) Cummins and her husband, Kevin. Skoolie is the modern-day term for a bus that has been transformed into an RV.

“We knew from the beginning we wanted to name our bus,” said Megan, a native of Hart County. “We all, especially our daughter, are huge fans of Dolly Parton. As we were tossing around ideas for a name in the first few days after bringing her home, our daughter was wandering through the house singing ‘Jolene.’ She casually turned to us and said, ‘Mama, this sounds like something you’ll be singing soon about our bus because Daddy is going to be spending all his time with her instead of you.’ We all immediately agreed it was perfect. We named her Jolene.”

Old school buses have become a platform favorite for the imagination of those ready to hit the open road in their own self-designed RV.

“We had been wanting a camper or RV for years,” Megan said. “Our original dream was actually to remodel an old Airstream or some other type of vintage camper, but we quickly realized Airstreams – even old, unlivable ones – were way outside our base price range, and older campers cost more to remodel than they were worth.”

Renovating a bus into an RV offers a way to be on the move but still maintain the relative comforts of home. And better yet, a school bus is a blank slate

“Last summer, an acquaintance of mine turned an old school bus into a mobile bookstore,” Megan said. “And as Kevin and I were looking at it, he said, ‘If she can make a bookstore out of a bus, why couldn’t we make an RV?’ We immediately started scouring the internet and were surprised to find a large community of people doing just that.”

As Megan and Kevin continued to research their options, they soon decided that a bus was the perfect choice for their family.

“School buses are practically tanks,” Megan said. “They’re made to protect our children. So, they are much more sturdy and sound than traditional RVs we had looked at. Plus, several school bus mechanics we spoke to confirmed many of these buses can run for close to a million miles, even though most school systems in Kentucky retire them – selling them to tour groups, churches, homeschool co-ops, etc. – after 200K miles or so.”

The couple purchased their bus from their local Scott County school district via eBay on August 20, 2019.

“After we drove her home, we immediately sat down to graph out a floor plan and make a budget,” Megan explained. “Those two things guided our entire process, from design to gutting the bus, to taping out our floor plan (and changing our design about 10 times), through the end of construction.”

Megan said their children, Caden and Molly Kate, also contributed in helping renovate the bus as well, including the design of the bus and manual labor such as painting the outside of the bus.

“When we first started the renovation, we got a lot of sideways glances and puzzled looks,” Megan said. “But, more often than not, we were met with curiosity and interest, especially once people hear what we’ve done with her and see the photos of what she looks like inside.”

Megan described Kevin as “…an incredible DIY-er with a great deal of knowledge about a lot of different things.” However, she also stated that there was a learning curve with this specific type of renovation.

“Nothing is standard-sized. Nothing is uniform,” Megan said. “The roof is curved. As a result, almost everything had to be customized and built to fit, which is really frustrating until you get the hang of it.”

Megan also said that sticking to a budget was a challenge of which she and Kevin were strongly committed.

“We used a variety of sources that made for big cost savings,” Megan said. “We found the kitchen cabinets at our local Habitat for Humanity Store. We bought a lot of our RV appliances and electrical system components at overstock auctions. We borrowed any tools we didn’t already have, and we researched tons of vendors looking for sales before we made any purchases.”

“The electrical system was another big challenge,” Megan added. “We knew we wanted the capability to camp off the grid without needing plug-in/shore power. So, Kevin had to navigate integration of the 12V system (solar panels and batteries) and the 120V system (shore power or our generator), along with the inverter which converts power from one voltage to another and also charges our batteries.”

The transformation from bus to Jolene was complete just eight months later in April of 2020. The skoolie has just over 200 square feet of living space with room to sleep six to seven people.

The renovated bus also has an RV refrigerator, RV air conditioner, apartment-sized gas stove range and oven, a full bathroom with shower, and a rooftop deck. Including the purchase of the bus, Jolene was completed in under $10,000.

“Kevin and I were recently talking about what the best part of this whole process had been,” Megan said. “First, it was a really daunting goal we were able to work through and accomplish together. So, there’s a lot of satisfaction in that. But even better is what we’ve ended up with. We have a one-of-a-kind RV built and laid out exactly how we want, based on our preferences and our needs as a family, and now we get to take it out and enjoy it.”

Recently, the Cummins family traveled with Jolene to Lillydale Campground in Tennessee for a four-day getaway of fishing, kayaking, and s’mores.

“Although some folks in the school bus conversion, or skoolie community, actually live in their buses full-time while they travel and work, we plan to use ours primarily for short-term camping for now,” Megan said.

As for advice to others who are looking to renovate a school bus, Megan said research and budget are key.

“There are more and more people every day converting school buses into RVs and documenting the process online,” Megan said. “Once you purchase a bus, immediately set a budget and graph out a floor plan. Always reach out to friends and family for help. There are always people willing to assist in the areas you’re not confident in, whether that be design, electrical, plumbing, or construction. And most of all, have fun! It will be a grueling, sometimes incredibly frustrating process, but it will be worth it in the end.”

For more photos and information of their renovation process and traveling adventures with Jolene, visit the Cummins family Instagram page, The Southern Skoolie, at @thesouthernskoolie or www.instagram.com/thesouthernskoolie. 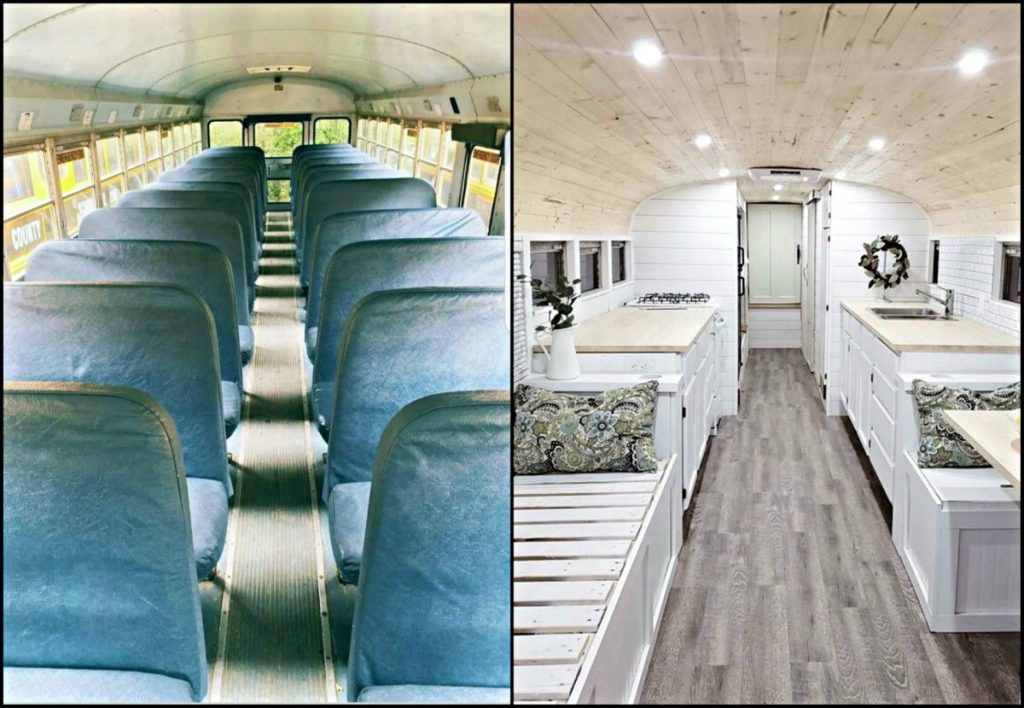 From bus to RV, this photo shows the previous inside, left, and the finished product on the right. 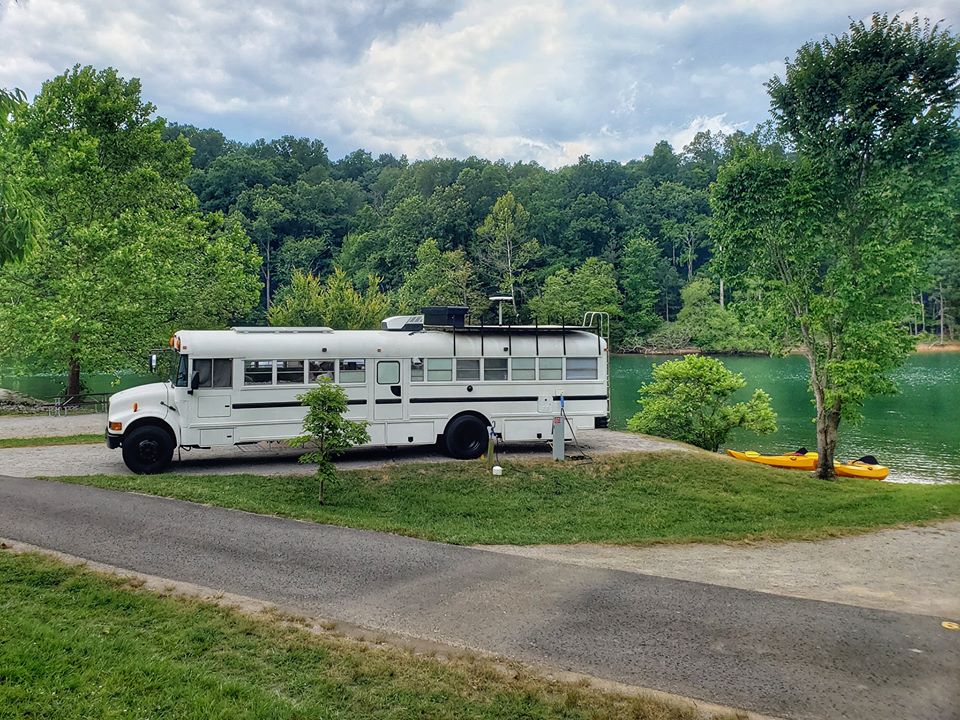 Their bus turned RV, affectionately named Jolene, is a dream come true for the Cummins family. More photos can be found on their Instagram page The Southern Skoolie.