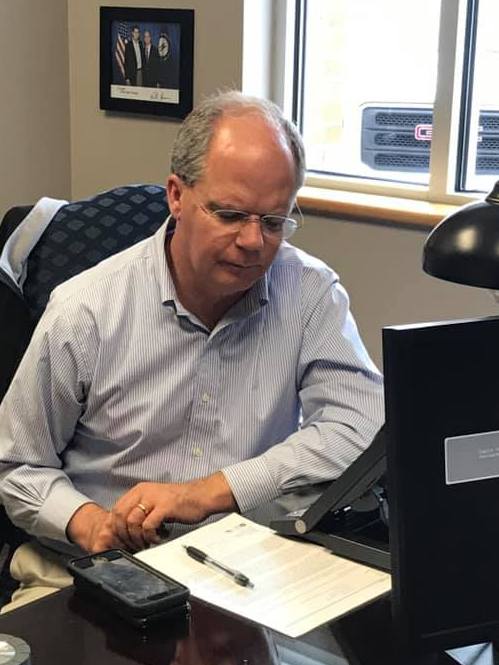 Congressman Brett Guthrie explained that the JUSTICE Act introduced by South Carolina Senator Tim Scott will play a key role in justice reform within our nation.

This story includes information that was relevant as of June 18 at which time the interview with Congressman Guthrie occurred.

The COVID-19 pandemic has affected the economy throughout the U.S. and Kentucky, as well as the health of thousands. Recent events have also plagued the nation and commonwealth, causing division and creating a demand for justice reform.

COVID-19 and the economy

Stay-at-home orders issued earlier this year when the COVID-19 outbreak began greatly affected millions of businesses and families financially. While the economy continues to reopen and coronavirus testing expands, there has been a rise in the number of confirmed positive COVID-19 cases in Kentucky and other states.

Although some individuals may see this as a resurgence, Congressman Guthrie said it was expected. In order for the economy to rebuild, it is necessary to allow reopenings.

“We’ve got to remember that when this first started, stay-at-home orders and such were issued to slow the spread (of COVID-19), to flatten the curve,” Guthrie said. “Dr. (Anthony) Fauci and the world-class epidemiologists around him never said we were going to stop this by staying home. There’s a balance.”

“You don’t want anybody to get sick, but the choices are we either completely shut down our economy until we get a vaccine or we manage the cases,” Guthrie added.

The congressman also explained that the key to reopening the economy versus the number of COVID-19 cases is about having a balance with health care capacity.

“As people are out and about, it (COVID-19) is a contagious disease. It’s going to spread,” Guthrie said. “We have to make sure that the peak of our spread isn’t in excess of our hospital capacity, and that’s why (from the beginning) we talked about slowing the spread.”

Congressman Guthrie also discussed the possibility of another stimulus package, as well as how the CARES Act helped Americans.

“…Since we passed the CARES Act, it looks like the economy has picked up again,” Guthrie said. “There’s going to be things we need to address. There’s going to be people who aren’t getting back to work as quickly as we’d like for them to be.”

“I think there will be another stimulus bill, but I don’t think it’s going to be a $3 trillion bill,” Guthrie added. “…I think we’re going to look at future plans…Instead of passing a $3 trillion bill, let’s assess what programs were successful, what hasn’t been distributed, and then go back and make wise decisions because this is borrowed money. This is debt.”

With the death of George Floyd in Minneapolis and Breonna Taylor in Louisville, a spotlight has been cast upon the issues between law enforcement and minorities.

Congressman Guthrie stated that while change is needed, defunding the police is not the answer.

Guthrie referenced Tim Scott, a U.S. Senator of South Carolina, and the Just and Unifying Solutions to Invigorate Communities Everywhere (JUSTICE) Act that he has introduced.

According to Scott’s website, the JUSTICE Act legislation “…provides long-term solutions focused on police reform, accountability, and transparency, while also promoting efforts to find solutions to systemic issues affecting people of color such as education and health disparities.”

“It’s a false choice to say that we have to have justice or police,” Guthrie said. “We can have both. We need both…Hopefully, we can put partisanship aside. The Democrats’ answer is to defund the police and allow things to happen like we’re seeing in Seattle…That’s just not what I want to support.”

“I’ve always heard, and I think it’s true, that nobody hates a bad cop more than a good cop,” Guthrie continued. “How do we ensure that bad cops are not moved from department to department? The policeman with George Floyd had at least a dozen or more charges against him…For some reason, this guy got to stick around…We need to look at that. But the idea that the citizens of Minneapolis, the citizens of Bowling Green, the citizens of Horse Cave, can live without a police force or a sheriff’s department, I don’t think that’s accurate. That’s not fair to everybody else.”

Earlier this month, Governor Andy Beshear announced that he planned to provide health care to all African Americans in the state of Kentucky. While Congressman Guthrie stated that he had not seen the Governor’s proposal and could not comment on whether or not it would be feasible, he said he does agree that health care should be accessible.

“We need to have people have access to health care,” Guthrie said. “I’m for that. We need to have better outcomes for people in our minority communities. Having said that, our health care system has cured sickle cell anemia, which is primarily a disease that affects African Americans.”

However, Congressman Guthrie said that he is well aware of the differences that minorities are experiencing with COVID-19 versus non-minorities, as statistics show that the disease is more lethal to African American groups.

“If you take an African American person with the same education level, the same income, the same health insurance as someone who is non-African American, they still have less positive outcomes,” Guthrie explained. “…We can address this issue if people in the hospitals will address the issue and focus on the issue…This is bipartisan…Republicans and Democrats realize that we’re having different outcomes in our health care system based on the color of the skin.”

Although universal health care has been suggested, Congressman Guthrie explained that the answer does not lie there either.

“The problem needs to be addressed, and American citizens need to hold us all accountable for this,” Guthrie added.

Better Life for All

With tensions continuing to plague the nation and cause division, Congressman Guthrie stated that the key focus is providing a better life for everyone.

“I think we just need to focus on what’s important, and what’s important is how to create a better life for ourselves and our children,” Guthrie said. “There are people who are frustrated. There have been people who are legitimately protesting and are frustrated with what they think about the future. But protesting and destruction are two different things, and that’s why we have to treat them as two different things.”

“Someone told me that they just want to feel like they have a place,” Guthrie added. “There’s not a country on earth, not a country that has ever been created, that gives the opportunities that ours have. And if people here feel like they can’t take advantage of those opportunities that are here, we need to take those road blocks out of their way. Whether it’s adequate access to health care or if it is adequate schools that they need, we need to make sure we improve all of those institutions so that people do have the opportunities to improve.”