There are few men who have influenced me as a businessman more than my children’s grandfather and great-grandfather: Donald Archer Lorenz and John C. Grubb.

Actually, it is because of these men that I took chances early in my newspaper career by accepting assignments in far-away lands like Rochester, New York and later in Key West, Florida.

For my entire career in this industry, I have been told that newspapers are on their way out of business.  Ironically, with each year facing doom, my family was blessed with me moving up in rank, accepting more responsibility and earning more pay.

But the burdens are far different when you own a business than when you simply work for one.  It wasn’t until those same men encouraged me, having Don arrange financing, co-signing my initial debt, and loaning me an additional $50,000, that I fully understood the pressures facing my industry.

There has not been a single year since 1998 that I wasn’t faced with some type of business changing memory.  A large print customer or advertiser would close or move out of our market putting me in a hole.  Or perhaps a politically-minded individual in one of our communities might start a competing newspaper, a politician would go on the attack, or having to deal with one of life’s personal issues might take my attention just long enough to ding my company.  Whatever the reason, you can pretty much guarantee that in my industry something was sure to happen to disturb those short periods of calmness.

The first one of those big setbacks was following September 11, 2001 and it worried me terribly. Page counts dropped by half, and all large companies stopped advertising.  I remember asking John and Don for advice, and I was advised to “Hunker down, hold on, and work yourself through it.”

John was the self-made great-grandfather of my children and seldom got anxious about anything.  The family called him “Baboo.” He said you need to cut expenses, keep key people empowered, and always take care of the people doing business with you.  Don or “Papaw” said this is important because most competitors won’t be able to do this, and they will close or you can buy them.  It is Don that helped me understand the concept that, indeed, “The terms can make a deal.”

I did this at that time and sure enough newspapers and printing companies closed, and not long after I bought a newspaper owned by AC Wilson and moved my family to Glasgow.  Glasgow was more centrally located for my small group, and it allowed me more time with my family.

It has been almost twenty years since that time, and these past few months have been like nothing I would have ever imagined.  But the strategy for our company has been just as John and Don advised back then.  We tightened, empowered our employees, and listened to our customers.

Sounds confident, doesn’t it?  But let me tell you the absolute truth.  While I was doing my best to maintain a confident appearance in front of my family and staff, I was privately taking to my knees and praying for the ability to make decisions that would protect my family, the families of my employees, and continue to serve our communities in a manner to honor Him.

In the past 60-days since those prayers began, I have merged a community newspaper with another, while securing the printing for this newspaper, picked up printing from a closed publishing company, attempted to buy a local daily who refused but instead closed, had our readership grow 500 paying subscribers in seven days, had newsstands sell out, and will soon announce the purchase of another community newspaper to the Jobe Publishing media network.

For anyone needing a real life example of his power, I am still here.  Please believe me when I say this: if you believe in Him, put your trust in Him, and use the skills He gave you, you too will come through these difficult times.

Thank you to the advertisers, employees, family, friends, and thousands of paying subscribers for choosing our company to deliver you local news.

Together, with Him, we will grow. 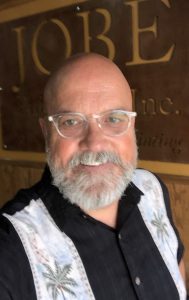