Michelle Rowe has been named Director of Operations at Jobe Publishing, Inc.  JPI is a family-owned corporation that began in 1998 by the Jobe family. The family now owns and operates newspapers in six counties in south central Kentucky, including this one. Jeff Jobe, one of the original founders, is still involved in much of the day-to-day operation.

Michelle has 20 years of experience with the company, having worked in several areas including bindery, payroll, and even developing film many years ago.

In the early years, Buddy Elkin served as Michelle’s mentor, taking her under his wing. It is during this time that she developed a love for graphic design and also newspaper in print.

“I love seeing finished projects that I was involved with. It’s very fulfilling,” Michelle said. “Having a newspaper to read in your hands is also much more enjoyable than reading digital. We still have several people in our communities that Jobe Publishing serves who solely receive their news from the newspaper.”

In her new role, Michelle’s additional responsibilities will include establishing the production schedule of the Horse Cave operation, managing the bindery, and overseeing finances and human resources of the entire company.

“My goal is to increase revenue, maximize efficiency while producing vibrant printed materials and newspapers that effectively fulfill our customer needs, and also keep our costs down,” Michelle said. “I’m looking forward to overseeing each aspect at our Horse Cave Operations Center.”

Michelle relates well to others and situations, making communication one of her strong traits. Her work ethic, professionalism, and passion for newspapers and printing will also allow her to manage the Jobe Publishing team well.

“We have an amazing team in Horse Cave,” Michelle said. “Some of our team members have over 30 years of experience with significant strengths that will make us excel during these challenging times. I am also eager to see how I can help the company excel as well.”

“This is a difficult time for us all, and having someone eager to put our company first is essential,” said Jeff Jobe, Publisher/CEO of Jobe Publishing, Inc. “We have this in Michelle.”

A native of Michigan, Michelle made the move to Kentucky in 2000. She graduated with an Associates Degree in Visual Communications from the University of Phoenix in 2011. Michelle is also a proud mother of an amazing eight-year-old son, Charles. Her office will be at the corporate publishing facility located in Horse Cave, Ky. 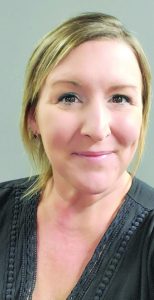