This morning, in efforts to evaluate the needs of Edmonton and Metcalfe County as the Coronavirus pandemic unfolds, stake holders gathered to discuss needs, concerns and ways to handle issues in the community, with the ever-changing situation.

The consensus is to prepare, not panic, and put politics aside.

“We are facing serious times, it is time to be cautious, and to work together. Check on the elderly, and use common sense,” said Judge/Executive Harold Stilts in a post-meeting press conference.

According to Metcalfe County Emergency Management Director, Emory Kidd, who hosted the meeting, this will be the last face-to-face gathering to discuss concerns. As part of the recommended social distancing, daily conference calls will be held and daily press releases will be handled by the Edmonton Herald-News, as well as various Facebook outlets, including the chamber and emergency management.

Janarae Conway of the Barren River Health District Health Department was present to answer questions and brief those in attendance.

At this juncture, the main concern is supplies.

“We got less supplies than we got H1N1, and nationally Kentucky is not a priority because of the small number of cases. We ask that everyone bear with us, and know that we will get supplies to them as soon as possible,” Conway said.

Specifically, the supplies Conway is referring to is PPE (personal protection equipment), including masks and disposable gowns.

Conway also said that testing supplies for the Coronavirus were limited, and turnaround time could be up to 7 business days.

“We have learned that some people get tested, the results are negative, because the virus is not detectable at that stage, and when tested again, they are positive.”

For the time being the advice remains the same; Keep 6-8 feet between yourself and others, and use hot soap and water to wash your hands, thoroughly scrubbing from the tips of the fingers to the top of the elbow.

In the meantime, officials are keeping a close eye on things, at a local, state, and national level. These are upcoming changes that are happening now, or expected to happen at local departments this week:

Government Center
At this time the Government Center is open to the public. However, many government buildings across the state are closing and Metcalfe may soon take this measure.

City Hall
“All we can do is keep on keeping on,” said Mayor Doug Smith. Dawn Devore was also present, and said, “We are not restricting things at this time, but we do recommend that if people do not have to come in, they do not. We recommend that they pay their bills over the phone or through the drive-through.

Lobby will be closed at 4:00 pm today and remain closed until further notice.

Ambulance Service
“If you call 911 we will respond,” said Garland Gilliam, Assistant Director

Barren-Metcalfe County EMS.
Gilliam stressed that although help would be on the way, that residents need not be offended by precautionary measures being taken.

“We will be social distancing, because we are taking every step we can to protect patients and the crew. But we will be operating as usual, and help will come.”

Sheriff’s Department/ City Police/Jail
For local law-enforcement entities, it is business as usual, according to Sheriff Lonnie Hodges. Delaney Wilson, Chief of Police, added that officers would be distancing themselves physically unless necessary, but responding to calls as usual.

According to Aaron Bennett, Barren County Jailer, the jail will not be accepting visitors, or participating in the work release program.

County Court Clerk’s Office
According to County Court Clerk Tommy Garrett, all drivers licenses are being extended by 90 days. Trials are canceled, as well as jury duty until further notice.

“EPOs are being heard, but only with those individuals and their attorneys present,” Garrrett said.

Garrett anticipates that his office will close before the end of the week.

County Clerk’s Office
“We hope to have it all figured out soon,” said Carol England Chaney, County Clerk.

“March is our busiest month with all of the farm trucks and trailers.”

However, the manner in which people handle tag renewals, and so forth will have to change.

“We are limiting foot traffic, and you can get renewals over the phone by paying with a credit card or debit card, and it can be mailed to you.”

PVA
Michael Welsh of the PVA was present and requested no foot traffic in his office as of close of business today. They will still be in office to accept calls during regular business hours. Unless changes are directed from State of Kentucky.

School System
Chris Huffman was present to represent the Metcalfe County school system. He reported that 1000 children were fed door to door yesterday, and that tutors are on site at the schools to help children.

“They are getting a hot meal they might not otherwise get,” he said.

He suggests people throw their plastic bottles in the trash.

Funerals
Larry Wilson of Butler Funeral Home said that they request no more than 50 people present at a time, and that whenever possible, private funerals with only immediate family be held.

Restaurants
Gaye Shaw of the chamber office reported that all local restaurants have gone to curbside service per the governor’s instructions. Some are also offering delivery. She has posted specifics, including hours on the chamber’s Facebook page.

Bowling Park Food Pantry and Shelter
Lisa Boswell, Director of Bowling Park reported that the food pantry is well-stocked. However, bingo is canceled along with the community meal. If anyone needs food, she recommends that they come to the pantry. “There are three in the shelter right now, so I have some rooms available,” Boswell added. She also said that at this time the fitness center was open, but did not know for how long that would endure.

“If people don’t have to be out, don’t be. And check on the people around you. People need to know that,” said Magistrate Kenny Scott.

“These are trying times, and this is the time to be a good neighbor,” said Emory Kidd. 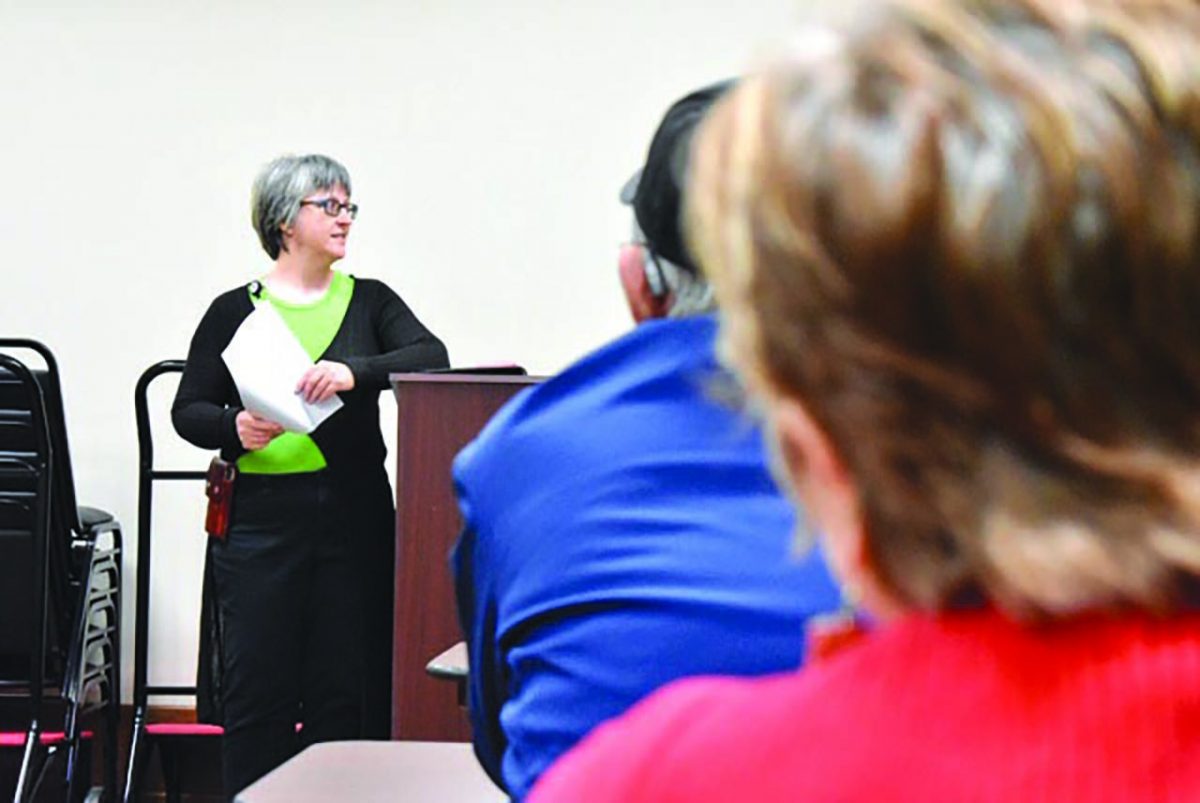 Conway, of the Barren River District Health Department, was present to address the Coronavirus pandemic and answer questions about how to move forward. Photo by Jennifer Moonsong, The Herald-News.