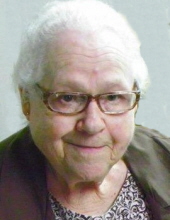 Maxine was born in Metcalfe County on March 1, 1925, to two godly parents, Lester Atwell and Carrie Trowbridge Atwell. She attended Western Kentucky University and went on to teach in Savoyard in a one-room school. After teaching, she stayed home to raise her children. In 1967, she began working for T. J. Sampson and retired there in 1990 as a CNA. She enjoyed her work and her friends at the hospital. Maxine loved to sew and will be laid to rest in a dress that she made. Having received Christ as a young girl, the most important thing to her was what she called “His everyday presence.” She lived her life loving and living for the Lord. Close to 80 years ago, she joined Joyner’s Chapel Church at the young age of 15 and was the oldest member of the church at the time of her death.

In addition to her parents, Maxine was preceded in death by her brother and sister-in-law, Dorchus and Bessie Mae “Dot” Atwell.