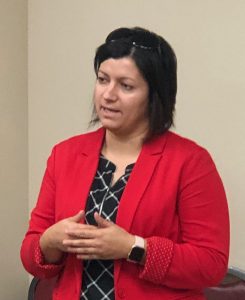 Dajana Crockett answered questions about the update of the Hazard Mitigation Plan.

The November 26th fiscal court meeting opened with the 5th grade Talented and Gifted (TAG) Team leading the Pledge of Allegiance. The group of students were observing the meeting as part of their studies on parliamentary procedures and government offices.

Entering into a Resolution and Interlocal Agreement with Community Action of Southern Kentucky was approved. “They have approached all the members of the 10 county BRADD area about a loan from KACo. Warren County is going to be the host party that signs the note, the rest of the other nine counties will sign on with them. Community Action does do a lot for the county here. They’ve got the head start, they’ve got the senior citizens, they’ve got the heat assistance program out here,” explained Judge/Executive Harold Stilts. He added that Community Action has properties they intend to sell to pay off the loan in the near future.

Dajana Crockett, Public Administration Specialist with BRADD was on hand to discuss the update of the Hazard Mitigation Plan. Crockett explained that every 5 years the plans are reviewed and updated in each of the 10 counties. “With this plan, we will look at the current hazards in all of our counties. We do each county separately but we do it all in one big plan. We’ll look at whatever disasters could possibly happen and we’ll come up with tentative projects so that if money does become available we will have a plan to look at selecting certain projects that are high priority first.”

The court approved the resolution to update the Hazard Mitigation Plan with Metcalfe County as the regional host.

The recommendation by Judge Stilts to appoint Eddie Jessie and Bobby Druen to the Metcalfe County Extension District Board was approved.

Matt Gallagher’s chair on the Edmonton-Metcalfe County Industrial Development Authority is due to expire at the end of December. The motion was unanimously approved to reappoint Gallagher.

The court also approved the renewal of a three-year Contract Agreement with the Edmonton Veterinary Clinic to operate and maintain the Metcalfe County Animal Shelter. The contracted fee has increased slightly to $2,200 per month.

Judge Stilts noted that after review the Recycling Center will need to have some readjustments to its employees due to the decrease in receipts for recyclables since tariffs were put into place.

Road Supervisor Bobby Bunch is gathering information for the 2020 chip seal and blacktop list and asked that the magistrates turn those in as they [county road crew] plan to prep those roads for the future work.

The next scheduled fiscal court meeting is Tuesday, December 10th.

The 5th grade Talented and Gifted (TAG) Team along with their teachers, the Judge/Executive, and the Magistrates.