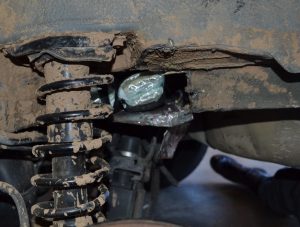 From an addict’s outlook, the meth and opioid crisis is devastating and deadly. From the vantage point of law enforcement agencies, it is a nightmare.

“The western part of the state was riddled with meth, but it was the make at home variety,” said Metcalfe Sheriff, Lonnie Hodges.

“The people who were cooking meth had individuals who would just go buy these ingredients, from store after store. Batteries, Pseudoephedrine. And if they couldn’t find it at one, they’d drive out of state or wherever they had to go to get the stuff to make it,” Winn said.

“We used to find a lot of labs in coke bottles. More often than not, I’d say 80 percent were Mountain Dew bottles. That’s what we call the one-step method. They could cook it anywhere, instead of like the full cook. That’s what made it mobile.”

“Ten to fifteen years ago we were busting up three labs in a weekend,” Grant said.

To a great extent, thanks to laws and policies regarding Pseudoephedrine’s ease of availability, home-based, and mobile meth labs were primarily abolished.

That is when Mexican meth emerged with a vengeance.

“What we are battling against now is crystal meth, and that is meth flooding into Kentucky from the Mexican drug cartel,” said Grant.

“It’s cheap. It’s cheap to manufacture in super-labs in Mexico, and it is coming into the county and into Kentucky by every means possible,” Grant said.

Semi-truck loads, fenders of vehicles and strapped to person’s bodies are all viable and thorough methods by which meth is being transported.

“It can be walked in, flown in or trucked in,” Winn said.

Thus far in 2019, KSP DESI west is responsible for roughly 261 meth charges, with Warren and Jefferson counties leading the way.

“That is where we have seized the most crystal,” Grant said.

That is not to imply that meth is a city problem. To the contrary, rural areas are just as affected as urban areas.

Barren, Hart, Metcalfe, Monroe and other rural counties including Cumberland and Green have a significant amount of meth-related charges and indictments, a testimony to how pervasive and infectious a problem crystal has become.

“We make cases every week now,” Hodges said. “And it is almost always crystal.”

Because it is being transported by way of so many methods, in outstanding quantities, it is an uphill fight.

There are source cities across the nation, including El Paso and Little Rock, and from those entry points crystal meth floods the rural areas.

“What you have here are not big players. They are lower level dealers and addicts. Once you find your major, higher level dealers, they are not using meth. It’s a business for them,” said Grant.

At the bottom of the business model you have addicts in rural communities selling just enough crystal to support their habit. It is the hopes of KSP DESI and other organizations, to climb the proverbial ladder back to the beginning and take big dealers down.

Meth addiction is a huge problem in and of itself, but new problems are emerging that law enforcement now has to contend with.

“Meth is being laced with fentanyl,” Grant said.

Fentanyl is a deadly drug that has caused several deaths.

“And fentanyl is nothing compared to carfentanyl,” Winn said.

Carfentanil or carfentanyl is a synthetic opioid analgesic fentanyl. Short-acting and with fast onset, it has weight for weight, around one hundred times stronger effects than fentanyl and thousands of times stronger than heroin.

“It’s an elephant tranquilizer,” Grant said. “As much as a pen-head amount could kill everyone in this room.”

These drugs, like meth, are entering the country by black market trade, and could sadly be America’s most secretive yet lucrative business.

“We are talking about a multi-billion dollar industry,” Grant said. “Americans are the ones suffering because the cartel is everywhere.”