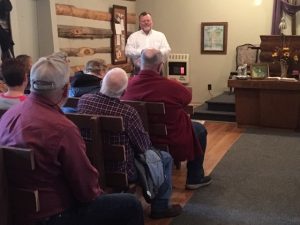 Attorney Hank Grady speaks to the crowd about legal options they can pursue if they choose to hire him and his environmental law firm.

Last week 34 residents who live near the rendering plant, formally known as Ag Renew, LLC gathered to meet with Kentucky environmental attorney Hank Grady, to discuss the possibility of bringing a class-action lawsuit.

“Its misery,” said Paul Smith, who lives a quarter-mile behind the plant. “You don’t dare open your windows, you can’t stand it now in your own yard.” When Smith built his home and shop over a decade ago, he never imagined the peaceful, tranquil setting would become what it has.

Randy Keltner, who lives a half-mile away says he hasn’t had it quite as bad, but that the intense, foreboding odor has significantly impacted his life. “You can’t leave your garage open, you can’t open your windows. Once you get the smell in your house, you never get it out,” said Keltner.

Dwight Daughtery and his wife say they’ve also been affected, along with many others, and that it has changed their social life. “We don’t have guests over, we don’t entertain. There are no more barbecues in our yard. It’s been that way since it has been there,” he said.

“We are part of a couple of tractor clubs. We used to host those meetings at our house, but we can’t do that anymore.”

To imply that it only affects the social aspects of life, to the contrary, residents say it effects every aspect of day to day living.

“I can’t stand to mow the yard. It’s bad when your grandkids come over and don’t want to play in the yard,” said Sherry Wilson. “I wonder if I have to wind up with a tumor before something is done about this.”

The residents say the odor is two-fold.

“It’s the smell of a dead animal on the highway, but times a thousand,” Smith said. The second smell is the odor of cooking animal parts.

“It smells like burnt grease, with a strong chemical smell with it,” Wilson said.

Wilson says that she also doesn’t like watching as trucks with dead animal carcasses protruding from the top go by the house.

Most of the associated residents are concerned about the environmental impact of such odors, and potential groundwater contaminants that might have an adverse effect on wildlife and livestock.

Not all residents say the facility must go, but all agree the problem must be dealt with, and quickly.

“This has gone on too long,” Daughtery said.

If the residents choose to employ Grady, they will have over forty years of experience behind them. Grady has been fighting Kentucky’s environmental battles for four decades and was responsible for getting the exact same business out of Russell County only a few years ago.

In addition to the residents present, Grady has collected testimonials from others in the community, telling more than 50 detailed complaints. Some of those complaints describe trickles of blood flowing through streams that connect to Sulphur Creek and even finding discarded animal parts in waterways they believe are castoff from the rendering plant.

Diane White, owner of Ma’s Deli which sits almost directly in front of the plant says she has made multiple complaints to local EPA officials with little response.

“You have to call Frankfort if you want anything done,” she said.

“I like business, it’s good for the area. I am in business myself and I try to keep that out of it, but something has to be done.”

For more developments on the story, please read the Edmonton Herald-News and Jobe Publishing, Inc. papers.