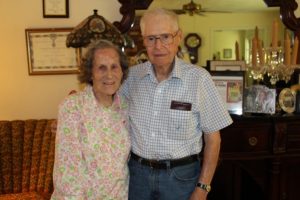 Last week Barren County lost one of its iconic World War II veterans with the passing of John Hugh Vaughn.  The Barren County Progress has published feature stories on Vaughn in years past and it is our honor to remember this great American by sharing his story with our readers once again.

“Our company is grateful for the opportunity to once again draw attention to one of our heroes who sacrificed and served our country in decades past,” said Jeff Jobe, CEO and Publisher of Jobe Publishing, Inc.  “Mr. Vaughn is a man who has stood beside me on many occasions over the years as our community has honored veterans and celebrated freedom and I’ve always been struck by his quiet demeanor that never sought attention for himself.  He’s a true American patriot and one of many in Barren County who deserve our respect and admiration.” Jobe continued.

At age 21, Vaughn was among a group of men who left Glasgow in 1941 to fight for a cause that was far greater than all of them combined.  Vaughn served his country for three years, three months, and four days in eight campaigns.  In that span of time, he faced water shortages and lizards crawling into his bed in Africa, several attacks where he was forced to dive for cover, and living in a hole dug for three for a few months, all to protect America and the freedoms we continue to enjoy today. 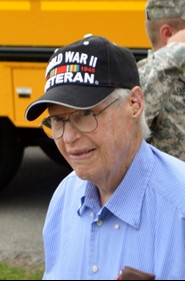 Vaughn’s Story
In October 1939 Vaughn joined the 123rd Calvary. In 1940, the Calvary was deemed obsolete and changed to anti-aircraft artillery. In January of 1941 Vaughn belonged to the Glasgow National Guard when they were activated for federal service and sent to Camp Hulen, Texas. The eastern world had been in war since the autumn of 1939 as Germany and the Axis forces were moving their way across Europe. However, in December of 1941, after the attack on Pearl Harbor, the United States would join the Allied Powers in the war.

In the first part of April 1942, Vaughn and Battery B 106th Coast Guard Artillery, moved from Texas to Harrisburg, PA to New York City.  On April 29, the group left the shores of the United States and arrived in Northern Ireland on May 15 and began training under the British Army. Vaughn was sent to an artillery school in England for three months before being sent back to Ireland.

During his three months in England, Vaughn was particularly fond of one memory. One night he and about 38 from the American army took a train to Newcastle, after being up all night, they were put up in a big building. They went out with some of the British soldiers to eat. Dressed in green, they followed behind a platoon of British soldiers, who clacked along as they walked, smoking cigarettes. As they passed along the streets, the people pointed, thinking they were German prisoners of war, as they had never seen an American before. Vaughn recalls that the British were typically excited to see or be seen with Americans.

One week after arriving back in Ireland, the whole unit was sent out again, this time to Liverpool, England. Gun crews were put on transports and the guns and artillery pieces were placed on Liberty Ships, and thus Vaughn found himself on a Liberty Ship for his journey to North Africa.

They landed on Arjun Beach, just east of Oran. There they fought the French for four days before the French could take no more and gave up and were transferred over to them. From Oran, the unit moved to Tunisia on November 17, 1942, and the war began for Vaughn and his comrades.  The following day, November 18, the Germans attacked. Vaughn and his outfit were to defend the ordnance from the German aircraft. They continued fighting for a long time, before Vaughn ever saw an American plane in the sky.

“May 1943, I saw my first American plane. I was in Tunisia all that time in contact with Germans,” said Vaughn.

From there, Battery B, 106th would engage in the Battle of El Quettar under General Patton. “Glasgow was represented in that battle,” said Vaughn with a sense of pride. El Quettar is remembered as the first battle where U.S. forces were able to defeat experienced German tank units. 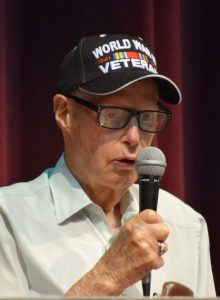 John Vaughn speaks at a function during the Midway Island Reunion in Glasgow in 2015. Sam Terry / Barren County Progress photo.

“I thought Patton was a good General. When in Africa, we were supposed to be under Eisenhower, but he stayed back 400 miles from the front, there was another American General about 50 miles from the front. Patton took over when we got pushed back, brought more equipment, and Patton went on the front line,” remembered Vaughn.

After the battle, the war in Africa ended for Vaughn and Battery B. They moved back to Oran to turn in guns, and received guns mounted on half-tracks.  They were put into the 7th Army and then went to Sicily. They stopped in Palermo after its fall, before being transferred to the 5th Army. The 5th Army invaded Salerno, Italy supporting ground troops attached to the 45th Infantry division.

From there, Vaughn moved up northeast of Naples, Italy before being relieved and moved back to the north of Naples. The 5th Army was then loaded onto a ship and moved out to invade Anzio Beach on January 22, 1944. The invasion was a success, but they would stay in Anzio, surrounded, until the 1st of June.

While stationed in Anzio, Vaughn would face one of his many close calls. Vaughn’s battalion was about 6 miles back from the front. Sergeant Terry Froedge and a few officers were meeting when Vaughn was called up by them to take Froedge up to get his things, because he was going home. Little did Vaughn know at the time that the meeting was to decide which of the two men would be sent home.

The highway ran north to south and when Vaughn and Froedge got to the front, the men looked surprised, asking, “You know they’re shellin’ that road?”  The two waited a few minutes before deciding to head back after hearing the news. Froedge told Vaughn that he was a better driver so he thought he should drive back, and Vaughn let him.

While on the way back, the shelling began and the two men were being hit hard. Froedge turned sharply to the right and drove off into a field. When he turned, a shell went over the top of the Jeep. If he had continued to drive straight, the two would surely have been shot, but since the shooter had elevated his shot to hit them going straight, the shot missed. Froedge drove off wide-open through the field and Vaughn just hung on.   “I’ve often wondered if I’d have cut out across that field or not.  That’s probably one of the best decisions I ever made,” said Vaughn.

Another time, Vaughn had been out to the gun crew, a trip he often made as an artillery technician, a job which required him to move to wherever he was needed to fix the guns and artillery while under attack. The Germans had the high ground, and Vaughn supposes they had been watching to see where he would go on this day, because as he was crossing a small valley the shells started to hit. Not needing anyone to tell him what to do, he dropped to the ground. He noticed a ditch nearby as the shells continued to drop all around him, but new his best bet was to stay where he was. After approximately 15-18 shells hit, he waited a minute before getting up.  After walking about 50 yards, he saw a Captain, Lieutenant, Master Sergeant, and Tech Sergeant climb out of a ditch. When they saw Vaughn they said, “Pretty hot down there, wasn’t it?” “I suppose they were wondering how a person survived all that,” said Vaughn.

On June 4, 1944 Vaughn left Anzio and moved to Rome. Patton had taken Rome (even though he wasn’t supposed to). They stopped in Northern Rome and were again transferred back to the 7th Army. During this wait, Vaughn had the chance to visit Vatican City. The 7th Army was sent back to Naples before preparing to invade southern France.  The 7th Army spent the winter in France near the German border.

While in France, Vaughn was at a crossroads, a position that Germans shelled before they pulled back. He was on the half-track there when the German shells started coming in. “You don’t need anyone to tell you, you just know what to do,” said Vaughn, and he knew to seek shelter, so he dived down. The shot hit the front wheel off on the other side. He would escape unharmed, but the half-track would be put out of action.

In March, they crossed the Rhine River at Worms, Germany and took Nuremburg. From there, they went to Munich, where John Vaughn would be stationed in May of 1945 when the war in Europe ended.  “After the war, the German people were happy to see you. The German people were nice and friendly,” said Vaughn.  After the war, they continued to move around, occupying Germany. 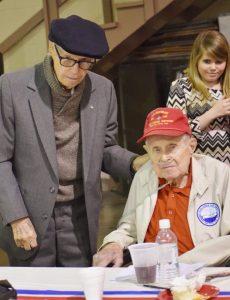 On July 2, 1945, Vaughn was notified that he would be going home. The following day he was put into a boxcar that he would ride in for four days back to France where he was given new clothes and then sent to Belgium for a week or two before boarding another Liberty Ship. On August 3, he reached the Boston Harbor and was discharged on August 8th in Indiana.

War is scary. “If anyone ever tells you they weren’t scared fighting in the war, they’re lying,” said Vaughn. He recalled one time where he and Dewey Steenbergen were under attack and he began to shake.  Dewey, joking, asked Vaughn if he was cold. A year later, when the two were in a building rocked by an attack, Steenbergen began shaking and Vaughn asked if he was cold. The small joke helped the two take their mind off what was happening. Vaughn would live, for a few months, with Steenbergen and Stanley Woodward in a hole they dug, covered with cardboard and dirt.

“I was glad to be home,” said Vaughn. After returning home, Vaughn soon met Eugenia, his bride of 73 years, since their marriage in November 1946. 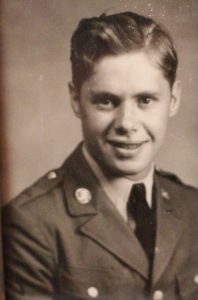