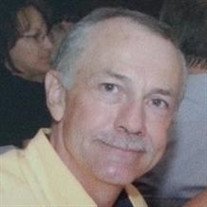 GLASGOW – Joseph Jackson Shirley, age 64, died Saturday, November 23, 2019, in Glasgow. Born in Glasgow, KY he was the son of the late Morris Lane Shirley and Ruby Thomas Shirley of Edmonton, KY who survives, he was a self-employed painter and retired from R R Donnelley. He was a well-known referee and umpire for many ballgames in Barren and surrounding counties and a loving member of Big Blue Nation. He was a member of the Edmonton Methodist Church.

In addition to his father, he was preceded in death by a brother, Tommy Lane Shirley.

Visitation will be held on Tuesday, November 26, 2019, 10:00 a.m. until 6:00 p.m. at the A. F. Crow & Son Funeral Home with cremation to follow. Share your message of condolence with the family of Joseph Shirley at www.crowfuneralhome.com.