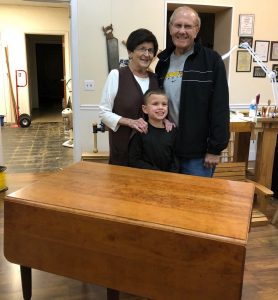 Charles, his wife, and great-grandson pose with their ‘new table’ in the Southern Wood showroom.

It is said that patience is a virtue, but how many people do you know who would wait 60+ years to complete a project? Well, that is exactly what Charles “Chach” Pedigo did.

Back in 1956, when Charles was attending Glasgow High School Mr. Matthews the shop teacher assigned him a woodworking project. “I had to have a project finished by the school year and I started this one,” pointing to the beautiful cherry drop leaf table sitting in the Southern Wood showroom.

He chuckled as he added, “I wasn’t going to do anything but he said he’d fail me if I didn’t…he failed me anyway.”

That is when Charles first began working on the table. He turned each of the six delicately carved wooden legs from cherry, began assembling the framework, and then stopped. He explained that he never finished the table because he ran out of wood and the school year ended.

Woodworker and family friend Ron Underwood took on the task of completing the table several months ago when the parts were brought to him by members of the family. The table is an English country style gate legged table with dropped leaves (hinged leg extensions fold out from each side to support the dropped leaf top when raised into place).

Ron asked, “What made you keep it all that time? Did you ever think about just tossing it?”

“A time or two,” replied Charles.

One of his family joked that he never tosses anything and his wife Jerry explained that the family had found it ‘up in mothers attic’ when they moved her closer to them. They had stored it in that attic when they got married.

The table’s top is also made from cherry but is lighter due to the aging (darkening) of the legs over time which tells its story. Charles has already made plans to pass the table down through the family as an heirloom piece. 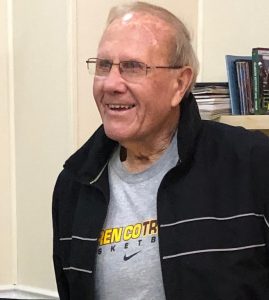 The table reveal was a surprise to Charles who had no idea it had been completed.