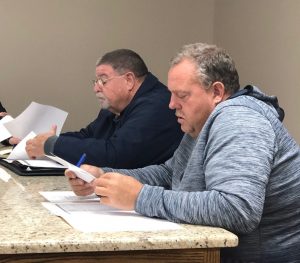 The November 12th fiscal court meeting had a very short agenda. The main discussion focused on the purchase of a 2019 Chevrolet Silverado 1500LD truck for the Road Department.

The purchase agreement is in negotiations because the truck received had 3,556 miles on it. It had been understood that the truck would be new not a demo model.

Judge/Executive Harold Stilts informed, “I have been in contact with James Geralds [Don Franklin Dealership] this morning. Hadn’t got back with him. He was discussing/negotiating the price just a little bit better than what he had on there [purchase agreement].”

At the time of the meeting, Stilts had been unable to reach Geralds and discuss the details so no action was taken. It will be presented at the next meeting on Dec. 10th.

The monthly financial statement was presented by County Treasurer Vickie Stephens. As of October 31, 2019, the cash balance of all funds was $2,558,753.27.

The only other business discussed was the rescheduling of the second December meeting which all agreed should be moved to Monday, December 23rd at 9 a.m. to avoid Christmas Eve.

Magistrate Kenny Scott mentioned attending the Veterans Day services at the schools on Monday and that the elementary students sang the Pledge of Allegiance. “I had never heard that before and it was very nice.”