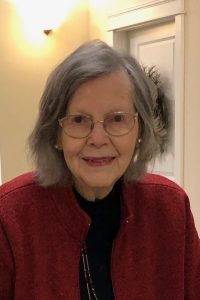 KNOB LICK – Mary Nell Hensley, age 94, died November 12, 2019, at Jefferson Park Nursing Home. She was born on January 17, 1925, in the Hickory College Community of Metcalfe County to the late Oather and Mattie (Shirley) Edwards. She was married to Clyde W. Hensley who preceded her in death. She was a homemaker and a member of South Green St. Church of Christ.

Nell grew up on a family farm with several brothers and a sister where they all worked and played very hard together. Faith in God and serving God was the center of their life and she was very thankful for that heritage. Among other things, she enjoyed riding horses back and became an excellent seamstress.

She was married to Clyde Hensley for 66 years. Together they had four daughters of which they were very proud. In the lives of these daughters, they always tried to teach the importance of living their life for God and country.

In addition to her husband and parents, she was preceded in death by one daughter, Donnie Gardner and her husband Jimmy; brothers: Guthrie Edwards (Edna), Guy Edwards, Rondal Edwards, Rex Edwards (Evelyn), Robert Edwards, Gladwell Edwards (Ruth), and Howard Edwards; one sister, Joyce Palmore; and one grandson, Kevin Gardner.

Funeral services were held November 16, 2019, with burial in the Happy Valley Memorial Gardens. Share your messages of condolence with the family of Mary Nell Hensley at www.crowfuneralhome.com.