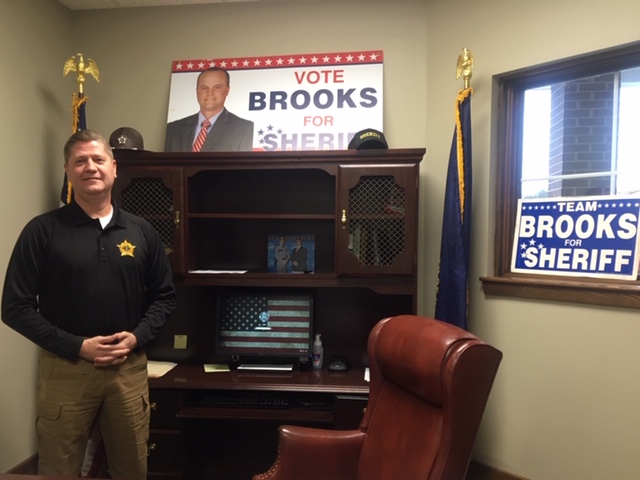 As you walk through the doors of newly elected Sheriff Lonnie Hodges’ office, there are plenty of reminders of why he is there. To the left of his desk is the American flag, to the right, the Kentucky flag.

Above the desk, sits a dated campaign sign for his dear friend, Sheriff Ricky Brooks. Sheriff Brooks was lain to rest in August, after he succumb to an 18 month long battle with leukemia, less than a year after the people of Metcalfe County elected him to serve.

For Hodges who won the special election last week with 1,327 votes, taking on this role is simply finishing what he started, because a friend asked a favor of him.

“He asked me if he won the election, would I come work for him to help him out. I said of course,” Hodges said.

Ironically, when Hodges and Brooks first met it was at the Metcalfe County Sheriffs’ Department. They did not become immediate friends, but Brooks had what Hodges refers to as an “infectious personality”, and the bond grew throughout the years.

The two had several things in common. They both grew up in Metcalfe County, they both had successful and fulfilling careers with the Kentucky State Police and both served in the military. Brooks served in Iraq and Hodges served during the Gulf War and Somali operations but didn’t deploy to either location.

“Not my decision,” Hodges said. “Wrong unit at the wrong time.”

“We were fishing buddies,” he said.

When Brooks first approached Hodges about helping him if he won the 2018 election, Hodges was taking a respite from work, and deciding what was next on his journey.

“I had been with KSP for twenty years. And I loved it. I could’ve stayed for thirty years, but I knew if I did I already knew what I’d be doing every day,” Hodges said. His adventurous spirit encouraged him to retire from KSP, but he knew he wanted to stay in law enforcement in some capacity.

“A songwriter doesn’t stop writing songs. I didn’t want to leave law enforcement. I love what I do,” he said.

By the time of last year’s election, Brooks had already been diagnosed with leukemia and spent over half a year in the hospital with treatment. By August 2018, Brooks was in remission with a hopeful outlook.

However, the state of remission did not last long for Brooks, and on election night last year when he won, he was in the hospital.

“They swore him in at his home. We had him a shirt made. He didn’t get to wear it the first time,” Hodges said.

So, as promised, on January 1, 2019, Hodges proceeded to take on the duties of sheriff in an unofficial capacity, awaiting his friend’s recovery and return. Sadly, Brooks’ health declined and he was never able to serve as sheriff in an official manner.

“Now, I am just finishing what I started with Ricky. I didn’t expect this, but I felt like I needed to do it,” Hodges said.

Much like his friend and predecessor, Hodges has an impressive resume in law enforcement. He was the first Kentucky State Police Officer born and raised in the Summer Shade community. He also served in the military before college and turned 18 years old in basic training.

Hodges also has extensive training in psychology and sociology, and he’s ready to put those credentials to work for Metcalfe County.

That isn’t to say there is an easy road ahead, but by his own omission, Hodges likes a challenge.

Some of the challenges he plans to tackle include staffing, equipment, and technology.

“We’ve been in a holding pattern for the past 11 months, not knowing what to expect. I plan to add manpower and improve on the technology. Everything in law-enforcement has gone mobile, we have outdated data terminals, and that has to be improved upon,” he said.

Hodges says that using more up-to-date technology, which has been available for 15+ years, all of the paperwork including citations, traffic violations, domestic violence orders, and so forth cannot be recorded by computer and stored in the terminal in Frankfort, cutting down on work, improving efficiency tenfold and lessening environmental costs.

The national average of officers per 10,000 persons is 20. Metcalfe County is sorely low on manpower by that measure.

Getting more trained deputies to patrol and updated weapons are priorities.

As always, the big picture of a more smoothly operational department will emerge over time through diligence and hard work.

For the family of Ricky Brooks, this is a form of closure.

Mindy Brooks, Ricky’s widow commented on Hodge’s win on election night, in a flurry of bittersweet emotions. “This is what Ricky wanted, this is the right thing. This feels like a way to have closure.”