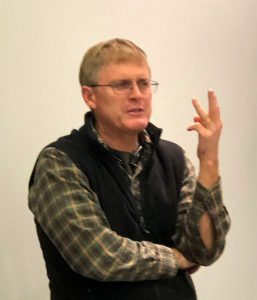 Once again what to do about the Dunham Lake Dam is the topic of discussion. On October 3, the state inspectors were in Edmonton to look over the dam. The city received an environmental letter with their visual inspection findings which stated: “While there is no immediate fix there are some issues that we need addressed for precautionary reasons and the dam will need to be monitored throughout the winter months.” The hazard level has been upgraded from moderate to significant. According to Mayor Doug Smith’s understanding, there is only one level remaining.

Option 5 – decommission – requires removing the dam, and may require the processing of the sediment, etc. per EPA requirements and reconstructing the landscape. Estimated cost $534,000.

Currently, the water level of the lake has been lowered to the point that no water is leaking around the dam according to Public Works Superintendent Moe Hensley. “We’re going to go out there and see if we can move [the hand valves]. I did find a blueprint for it from 1964-1965 and it shows how it was built.”

According to the state letter, the valves need to be working and if not repaired. “You’ll have to get their permission before you do anything. If we come up with a plan, it will have to be (it’s in the letter) you gotta get an engineer from the state of Kentucky and then you have to tell them. Send them a letter with what you want to do to the state and they have to ok it and issue a permit,” explained Hensley.

“If we don’t find any money, which you know we’ve been looking for a little while here, I don’t know whether we either take our hard-earned dollars and go down there to try to patch the dam and save the lake or we’ve gotta decommission it,” stated Mayor Smith.

The next steps taken will be determined after talking further with the state.

ABC Administrator Fred Ray reported that all the businesses within the city limits were in compliance for the month of October.

Edmonton Fire Chief Jerry Clemmons reported a total of 18 runs in October. Of those runs 14 were medical, 1 was an accident with injury, 1 lift assist, 1 stolen vehicle wreck, and 1 special detail for the school.

The repairs to the fire department building are in process. All the lights are up along with the ceiling fans. The truck bay has been painted and the doors are ordered. The kitchen is still to be painted and the front bathrooms are still to be repaired. The roof leaks are in the process of being worked on also.

Bruce Sullivan a resident of Robert Edwards Road was again in attendance to learn the requirements for having water run the three-quarters of a mile to his home. It is estimated that the cost to run waterlines on the road will be around $21,000. As in previous cases, the three customers on the road would be required to split the cost of installation equally and the city would then maintain the line.

The December meeting time has been moved to 4:30 p.m. on December 2nd.