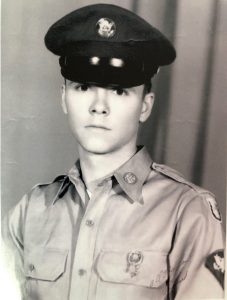 Many Metcalfe County folks remember Richard Duncan best as the owner and operator of Duncan Life and Health Insurance in Edmonton or perhaps you saw him perform in one of the many Barn Lot Theater plays he took part in. However, you may not be aware that he was an Army veteran.

After graduating high school in Metcalfe County, Richard attended Western Kentucky for one year after which his father passed away. He felt like he needed to be home to take care of his mother and other family members so he returned and went to work. On July 20, 1960, he married Jeanette VanZant who related the following story and shared photos with The Herald-News.

After learning that he was near the top portion of the draft list, Richard decided to enlist. That was his way of choosing where he would be stationed and what his duties would be.

He completed his basic training at Fort Jackson, South Carolina and from there he moved to Fort Davens, Massachusetts. Where he was given Army Security Agency training and became an Army Intelligence Specialist 5th Class.

After being at Fort Davens for a while he received a furlough so his wife, Jeanette made plans to fly to Boston for a visit. Spouses were allowed to stay in part of the barracks at that time. After a nice dinner and window shopping, they decided to take a stroll through Boston Commons (a park) after dark. “Needless to say, we did not tarry long because we found out later that was a very dangerous place to be after dark,” according to Jeanette.

Richard flew back home with Jeanette for the remainder of his furlough. When it came time to return to Fort Devens, his Mom and Jeanette, took him back to Cave City to catch the bus to Louisville airport.

“We knew that there were several inches of snow in Fort Devens at the time.” After his bus left his mother, Kizzie Duncan realized her son had left his Army issued overcoat behind so she began to yell for Jeanette to chase down the bus. At first, she didn’t want to try such a thing, but his mother insisted that he would “freeze to death.”

“I don’t think I have ever driven that fast since but Richard finally noticed that we were following or maybe had overtaken them almost halfway to Louisville, so he got the bus stopped and we gave his coat to him. His mom felt so much better,” says Jeanette.

Jeanette said that Richard chose to be stationed in Asmara, Ethiopia at Kagnew Station because it was a place less traveled and he hoped he would one day travel and see the more common places in the world.

While in Ethiopia he gathered many close friends. One called “Lucky” had a large family and Richard and his buddy were invited to attend many family celebrations with them and being American soldiers they were treated as guests of honor. This eased the pain of separation from his family back home. 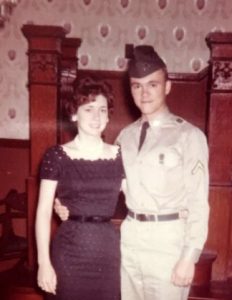